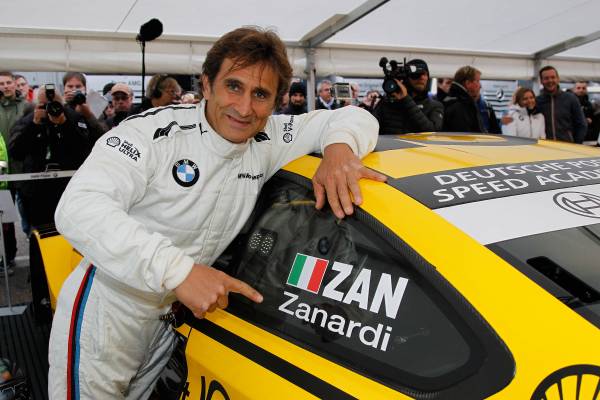 BMW works driver Alessandro Zanardi (ITA) returns to the cockpit of a race car: at the DTM races at Misano, Italy (25th/26th August), the 51-year-old will make a guest appearance in a BMW M4 DTM. The DTM umbrella organisation, the ITR, as well as the two other manufacturers involved in the DTM, Audi and Mercedes-Benz, have given the green-light for this guest start. The BMW M Motorsport engineers, who have worked with Zanardi in the past, are currently collaborating with him on the development of a system to modify the BMW M4 DTM to suit his needs. The DTM race appearance at Misano is another step on the way to Daytona (USA), where the Italian will contest the legendary 24-hour race in January 2019.

Zanardi’s preparation for his guest start gets underway this weekend (1st to 3rd June), when he will accompany the BMW DTM teams and drivers at the Hungaroring near Budapest (HUN), to familiarise himself with the details of procedures, structures and processes in the DTM. A roll-out and test drives are additional steps planned for the coming weeks. Dates and locations will be announced at a later date. In addition, with regard to the technical feasibility, BMW Motorsport is working closely with the DMSB, who supports the project.

The BMW works driver and brand ambassador has already visited numerous DTM events and has also been behind the wheel of a BMW DTM race car many times. In recognition of winning two gold medals at the Paralympic Games in London (GBR), Zanardi completed a sensational test in a modified BMW M3 DTM at the Nürburgring (GER) in 2012. At the 2015 DTM season finale at Hockenheim (GER), he was at the wheel of the BMW M4 DTM race taxi. However, starting a DTM race is a first for Zanardi.

Zanardi has enjoyed success in BMW racing cars for many years. In 2003, just two years after his accident in the CART race at the Lausitzring (GER) in which he lost both legs, he contested the European Touring Car Championship (ETCC) season finale at Monza (ITA) in a BMW 320i adapted to his needs to the delight of fans. 2004 saw Zanardi contest the entire ETCC season, and between 2005 and 2009, he competed in the FIA World Touring Car Championship (FIA WTCC) with BMW Team Italy-Spain – ROAL Motorsport. On 28th August 2005, Zanardi caused a sensation in Oschersleben (GER) when he became the first physically impaired driver to win a world championship race. He celebrated a total of four wins in the FIA WTCC. Since 2010, Zanardi has focussed on his second passion, para-cycling. He began a successful career in this discipline, in which he has won a total of four Paralympic gold medals and ten world championship titles to date.

2014 saw Zanardi return to the race cockpit and contest the entire season of the Blancpain GT Sprint Series in a modified BMW Z4 GT3. The next highlight came in 2015 when, with Timo Glock (GER) and Bruno Spengler (CAN), he participated in the 24 Hours of Spa-Francorchamps (BEL) in a BMW Z4 GT3. The trio battled for a top five position down to the wire, but a technical defect forced them to retire in the final hour of racing. Zanardi’s last official race outing was on 16th October 2016 as a guest starter at the season finale of the Italian GT Championship at Mugello (ITA), where he made his debut in the BMW M6 GT3 – and celebrated a sensational win in the Sunday race.

“Alex Zanardi as a guest starter in Misano – that will be a real sensation in an already spectacular DTM season. The fans can look forward to a fantastic race weekend in Misano: the DTM’s first guest appearance at this track, the first ever night race in the DTM and Alex Zanardi, who as the ‘local hero’ will play his part in making this event a special experience for everyone. Our thanks go to the ITR and our colleagues from Audi and Mercedes-Benz for giving the green-light for this guest start. Our engineers are currently using all their expertise and ideas to work on modifying the BMW M4 DTM to suit Alex’s requirements. We are looking forward to having Alex in our BMW DTM family.”

“I am incredibly excited about racing the BMW M4 DTM at Misano because I always dreamt of adding the DTM experience into my ‘book of best moments’ in my motorsport career. DTM has for many years been one of the motorsport disciplines that are the pinnacles of racing regarding technology, the speed of the car and the level of the competition, which these days is higher than ever. The skills of the drivers competing in DTM and the preparation of the teams are, in my view, as good as in Formula One. They are top of the game and you can’t get any better than that. And on the other hand that is what concerns me and will make me to approach this challenge with a lot of respect, knowing that it will be one of toughest things I have ever done in my racing career. I am really grateful that BMW offered to start this project and to all the engineers in Munich who are already preparing the car. I will do my very best to represent them in such a competitive field.”

“We are delighted to welcome such a well-known guest starter to the DTM for our debut at Misano. Alex Zanardi is very popular, not only in his home country of Italy. His extraordinarily impressive performances as an athlete, as well as his unwavering optimism and his humanity go way beyond sport and have already inspired an audience of millions around the world. Alex doesn’t approach any task half-heartedly – quite the opposite is true. So, we know he will be preparing for his DTM guest appearance extremely professionally and full of ambition, so as to deliver a top performance in front of his home crowd. Welcome to the DTM dear Alex!”

A historic milestone between DTM and SUPER GT