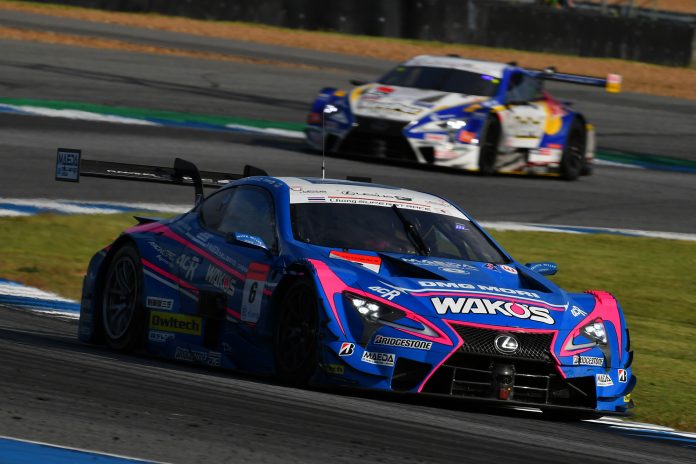 The Chang SUPER GT RACE, Round 4 of the 2019 AUTOBACS SUPER GT series, was run on June 30th (Sun.) at the Chang International Circuit (4,554m × 66 laps) in Buriram, Thailand. In the GT500 class, the No. 6 WAKO’S 4CR LC500 driven by Kazuya Oshima and Kenta Yamashita started from pole position and ran on to win. In the GT300 class, the No. 10 GAINER TANAX triple a GT-R driven by Kazuki Hoshino and Keishi Ishikawa was the winner.

Last year’s Round 4 in Thailand saw a squall just before the start throw the race into confusion, but this year’s race saw no such problems and started smoothly on schedule at 3:00 (5:00 Japan time) in the afternoon.

The pole-sitting No. 6 WAKO’S 4CR LC500 driven by Kazuya Oshima got a good start followed by the No. 19 WedsSport ADVAN LC500 (Yuji Kunimoto) and the No. 36 au TOM’S LC500 (Kazuki Nakajima), in what soon evolved into a race between these three LEXUS LC500 machines. The au TOM’S LC500 that had just won Round 3 at Suzuka ran in 2nd position in the early stages of the race in a close battle with the leading No. 6 LC500. But on the 29th lap as the race entered its middle stages, Nakajima in car No. 36 managed to pass Oshima in No. 6. In the routine pit stops, however, fast pit work by the No. 6 team got it back into the race in the lead again.

Chasing the leading car No. 6 (Yamashita) now was Nick Cassidy in the No. 37 KeePer TOM’S LC500 (Ryo Hirakawa/Nick Cassidy). After pushing hard to pass car No. 36, Cassidy began to close in quickly on No. 6. Time and again Cassidy tried to pass Yamashita, but each time he was fought off, and eventually it was Yamashita in car No. 6 that ran on to take the checkered flag first and win the race. This satisfying win was the first victory for the No. 6 WAKO’S 4CR LC500 since the final round of the 2013 season. For Kenta Yamashita it was his first victory in the GT500 class. Second and third places went to the No. 37 KeePer TOM’S LC500 and the No.19 WedsSport ADVAN LC500 (Sho Tsuboi driving in the second half) respectively, giving the LEXUS LC500 its second podium sweep of the season following the previous round at Suzuka.

GT500 machine, while the top-finishing Honda NSX-GT car was the No. 64

In the GT300 class race, the No. 56 REALIZE NISSAN AUTOMOBILE TECHNICAL COLLEGE GT-R (Kazuki Hiramine/Sacha Fenestraz) ran in the lead until the late stages of the race until the No. 10 GAINER TANAX triple a GT-R (Kazuki Hoshino/Keishi Ishikawa) that had worked up from a 7th position grid start to close in on it. On the final lap of the race, Ishikawa in car No. 10 passed Hiramine in No. 56 to grab a come-from-behind win. Finishing 3rd was last year’s champion team, the No. 65 LEON PYRAMID AMG (Haruki Kurosawa/Naoya Gamou).

Winner Comments
No. 6 WAKO’S 4CR LC500 [GT500]
Kazuya Oshima: “The last time we won a race was back in 2013 and since then we went through some hard time, and even though we were having some good races recently we were still not able to get a win. So, I am just very happy that were able to get this first win in six years with this new team.”

Kenta Yamashita: “Watching Oshima-san race, I realized that it would be difficult for us to run at a winning pace. But since some fast pit work got us back in the lead, I was under pressure to defend that lead no matter what. So, I am really happy that we were able to win. I am just very grateful to the whole team.”

No. 10 GAINER TANAX triple a GT-R [GT300]
Kazuki Hoshino: “The GT-R does well on this track, and I have been able to win here twice. We had a chance to win in the last round at Suzuka, but in the end we weren’t able to make it happen. So I was really determined to get the win here today. Because we chose a harder compound tire for the Qualifying, we could only get 7th position on the starting grid, but I ran with the belief that our pace would be the fastest in the race today. All I can say is that I am very happy that we won.”

Keishi Ishikawa: “I am simply happy to have gotten this win. Since we had chosen the harder tires, we only finished 7th in the qualifying yesterday, but I was sure that if we worked hard, we had a chance to win today. The appearance of the Safety Car at that point in the race was a lucky break for us. On the final lap I was determined to try to pass the leader (car No. 56) and I was glad that I was able to make that pass in a clean battle (thanks to Hiramine-san’s fair play). I thank him for that.”