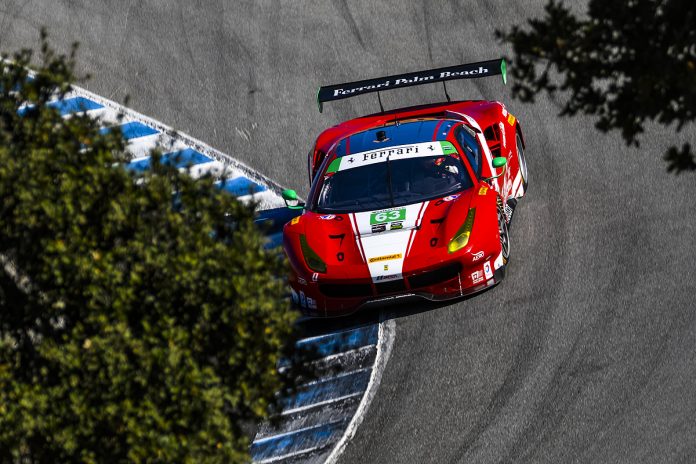 Class leaders Christina Nielsen, Alessandro Balzan and Scuderia Corsa have found victory at last in this IMSA WeatherTech SportsCar Championship season. Today at Laguna Seca, the No. 63 Ferrari 488 GT3 crossed the line as both the GTD race and Championship leader — the first win of the season for this greatly successful team.

Taking this win provides much-needed relief for all involved. The fact that they’ve been Championship leaders throughout much of the season without ever standing on the top step of the podium goes to show that consistency is a trademark of this caliber of team and their drivers. With only one race remaining this year, Nielsen and her co-driver Balzan can approach the final event with even more confidence than before.

“I’m honestly speechless,” said Nielsen. “This weekend’s race is a perfect example that anything can happen in racing and that it’s a totally unpredictable sport. We’re at the end of the season, so there are two types of people driving out there. One type are the ones in contention for the championship — people like myself who have something to lose — and the other drivers know that. The other type are those who are purely going for race wins now because they know that’s their best option. It was a very aggressive field out there today, and I drove conservatively. Unfortunately, I got a little bit caught up by another car after the start and was stuck behind that car for quite a while. That’s racing — and it’s a super difficult track to take on. This just shows the strength of the team.”

Nielsen drove the opening stint of the two-hour, forty-minute race in the beautiful, sunny weather at Laguna Seca. She started in 9th and maintained a top-10 position even with an increasingly aggressive field of competitors around her. By executing a smart fuel management strategy, the team gained additional places, eventually overtaking every other car in their class to lock in a hard-fought victory with only a few minutes left on the clock.

“I can’t describe how grateful and happy I am to be teamed up with Scuderia Corsa and Alessandro Balzan,” Nielsen continued. “Everyone did an amazing job and this sort of fulfills the season. We knew we had a good shot at winning the championship. It would have been weird doing it without having a victory. To have this win and to be so close to winning the championship and really going in with a good margin for Petit Le Mans is everything for us drivers.”

The next, and final, race is in Atlanta, Georgia. Historically, Nielsen has seen this track as a championship-deciding venue, and this year she’ll be able to have fun while closing out the year.

“Petit Le Mans is my favorite race of the season,” Nielsen said. “To go into it like this and simply just enjoy it without having the pressure like I did the past three years being in contention for the championship is going to be a different experience, and I very much look forward to it!”

The feeling of victory is sweet, and by now Nielsen knows it well. Her story of success continues to keep her elevated as one of the favorite personalities in sportscar racing, which her partners in both the U.S. and Europe enjoy. To enable her to continue her success, she’s reviewing relationships with additional sponsors leading into the 2018 race season.