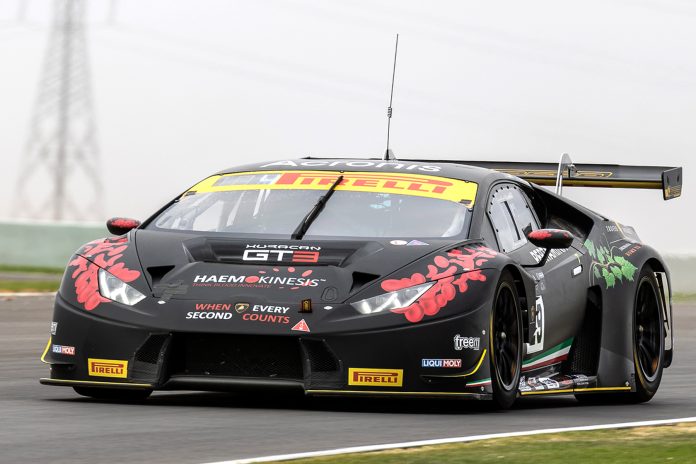 The second event of the 2018 CAMS Australian GT Championships promised to be one of the best experiences of the year with the series’ debut at the new 7.7-kilometre ‘The Bend Motorsport Park’ in South Australia, but whilst the opening endurance round of the season delivered on that promise, it delivered a whole lot more for the 19-strong field across the race weekend.

For Trofeo Motorsport, they – like the full field of assembled GT3 and GT4 cars – experienced a weekend like no other with a full spectrum of weather conditions highlighted by cyclonic winds, sand storms and pelting rain, conditions which ultimately contributed to a change in race structure on Saturday afternoon with the proposed ‘international’ rotation shortened to the ‘national’ length circuit of 4.95-kilometres.

At the same time organisers changed the proposed race structure from a two day event split after the first hour, to a full length enduro held entirely on Sunday morning.

For Jim Manolios and Dean Canto, a series of tyre deflations ultimately stalled their forward progress in the #29 Lamborghini Huracan, as did an off for Canto late in the opening qualifying session which forced them out of the second session and a rear-of-field start for the main race, but despite that, they proved to be one of the fastest cars in the field ahead of a sequence of stops to resolve leaking tyre valves.

“In the end it wasn’t such a great result, but it was a good weekend for the team,” Jim Manolios explained. “We were fastest in pre-event practice on Thursday which was encouraging, then well within reach during practice, but that was a challenge in itself!

“At one stage I was over the back of the circuit as the storm rolled in, and you couldn’t discern between the track surface and the sky, they both looked the same, and with no corner markers at this stage, you really had no idea where the track ended and the sky started. The wind had also muddied up the mirrors and the rear facing camera, so I was blind except for a clean section on the windscreen, but the dust had even spread to the inside of the windscreen! It was a challenge like I’d never experienced before!”

For Canto though, once the circuit was dry, the Adelaide-based driver was immediately on the pace and in qualifying, held two of the fastest sectors on the circuit, times which were not beaten across the weekend, although on aggregate he was a bit over two seconds off the pace of the front row, despite being sixth overall.

Sadly though, whilst pushing hard late in the session, he went in a bit deep into one of the corners at the back of the circuit, and onto the runoff area which ultimately saw him into the gravel on the other side of the grass verge, collecting rocks, some of which tore off a part of the all important flat floor.

Damage was mostly superficial, but required the team – including Canto himself – to get onto the tools in an effort to have the car ready for the opening stanza of the race that afternoon, with the team forced to start rear-of-field because they missed the second leg of qualifying. In the end they repaired the car in time to discover the session had been turned into a final 60-minute practice session, with the race transferred to Sunday morning.

Jim Manolios kicked off the opening leg, holding on to the pack before being forced down pit lane with the first of the tyre deflations, something which had plagued the team during the Liqui Moly Bathurst 12 Hour.

“We went right through the rims, the seal with the tyres and everything else we could think of after Bathurst, and thought we were okay, but the problem reappeared not once, but twice at The Bend, in the end forcing an unscheduled stop which dropped us outside the top eight,” Manolios confirmed.

“It turns out it was only affecting the front tyres, so we went through the process again and discovered that the tyre heater we use to prepare tyres ahead of a session, was heating the valve to a point where an aluminium spacer inside was heating up and failing to seal, so the tyres started to slowly lose pressure. Fortunately we found the problem, and will look for a solution, but it certainly put paid to a more solid finish.”

In the end, despite dropping a couple of laps down due to the additional stops, Canto was caught right in the battle at the front of the field, and whilst not in outright contention, was able to stay with the leading cars over the final stanza of the race, comfortably matching them on pace.

“Okay, so not the result we wanted, but again, we were right on the pace of the leading cars,” Manolios said. “Had we not suffered the valve issue, we would have been top seven or eight I think, but we also showed we had real pace, especially in the twisty stuff where aero became an issue, we were as fast if not faster than anyone else, so lots of positives to take into Sandown for the next round.

“Overall we can not say enough as Trofeo Motorsport about how good the facility at The Bend really is, I think it fantastic as a driver’s circuit – it has great flow, very much like Phillip Island – and I think ultimately it will become one of Australia’s most loved circuits and we’re really looking forward to our next event there.”

To keep up to date with the Trofeo Motorsport team as they contest the 2018 season, follow the team via; https://www.facebook.com/TrofeoMotorsport