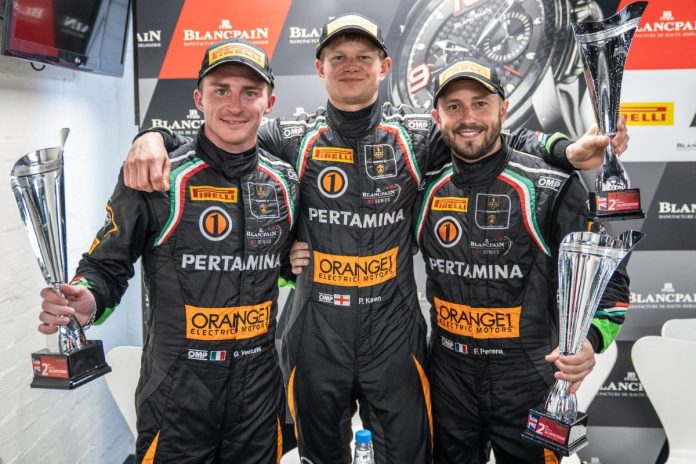 ORANGE 1 FFF Racing continues its striking form in its maiden season in the Blancpain GT Series: at Silverstone, for the second round of the Endurance Cup, the Chinese squad took second with the #519 Lamborghini Huracan GT3 Evo driven by Lamborghini Factory Drivers Phil Keen, Franck Perera and Giovanni Venturini. It is the third consecutive podium and with a third different line-up on the Lamborghini Squadra Corse cars in three races. After the podiums at Monza (Endurance Cup) and Brands Hatch (GT World Challenge Europe), the team was confident arriving at Silverstone, another legendary track and a circuit suiting well the qualities of the Huracan.

The cars proved competitive since free practice, which started on Thursday, and qualified well, with the #519 (Perera-Venturini-Lind) taking P3 on the grid, the #563 (Caldarelli-Lind-Mapelli) in P5 and the #555 entered in the Silver Cup (Beretta-Menchaca-Proto) in P20.

The race, marred with incidents since the very start, saw both #519 and #563 fighting at the very top throughout the 3 Hours. At a given time, they even ran first and second. Unfortunately, the #519 made its first pit stop shortly before a full yellow course started, losing its advantage. After the second change, car #519, with Venturini at the wheel, fought fiercely for victory, eventually crossing the line just 2 seconds behind the winner. Car #563 also was involved in a close final duel, which included a contact, crossing the line in P6. The results allow both Caldarelli-Lind-Mapelli and ORANGE 1 FFF Racing to take the lead in the Drivers’ and Teams’ overall standings of the Endurance Cup.

Car #555 was victim of an incredible accident, when it was running 3rd in the Silver Cup: exiting the pits and keeping the correct line, Proto was clipped by another car and sent into the wall. Despite the very severe crash, the American luckily escaped unhurt.

Fu Songyang, ORANGE1 FFF RACING Team Owner
“It is almost unbelievable to take a third consecutive podium in three races in the world’s top series for GT3 cars. On top of that, we achieved this today at Silverstone and we are leading in both standings of the Endurance Cup. It’s an amazing achievement for a young team like ours and I am very proud of the excellent work done by everybody. We still have to improve and acquire experience, but I can’t be happier of how we started this exciting project”.

The Belgian Audi Club Team WRT heads to Monza for the...