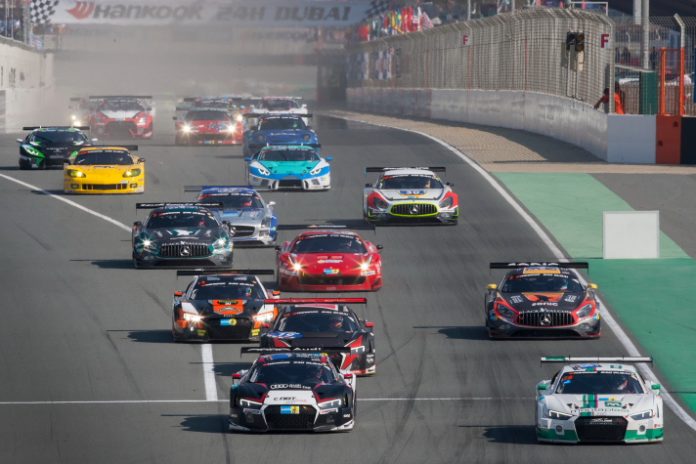 The 2017 motor racing season gets underway at Dubai Autodrome with the inaugural Hankook 3x3H DUBAI for prototypes (10-11 January) and the Hankook 24H DUBAI (12-14 January) as the season opener of the 24H SERIES powered by Hankook. “Just after Christmas, the containers with the cars and equipment have arrived in Dubai and they will be delivered in time to Dubai Autodrome for the teams to set up for race week. Anticipation is rising by the day, we just can’t wait for the action to start,” says Natasha Mark on behalf of CREVENTIC. The Dutch agency is the promoter and organiser of the 24H SERIES powered by Hankook in co-operation with the DNRT (Dutch National Racing Team). “This year’s event will be special as we will be organising a race for prototypes for the first time as well. Moreover, the new-for-2017 TCR Middle East will feature as an official support class to the Hankook 24H DUBAI, which again underlines the great co-operation between CREVENTIC and the TCR organisation.”

The Hankook 3x3H DUBAI, a triple-header of three-hour races for prototypes, marks CREVENTIC’s first-ever race for this type of race cars. The provisional entry list includes 18 cars: two in the P3 class, seven in the CN class, one in the PX category and eight in the G57 class. Famous outfits such as Graff Racing, IDEC Sport Racing, Avelon Formula, GDL Racing Middle East, Krafft Racing, and Kox Racing will be competing in the P3 or CN classes with prototype brands Norma, Radical, Ligier, and Wolf. The G57 class is a predominantly British affair, with Simpson Motorsport, Century Motorsport, HHC Racing, Optimum Motorsport, and CWS all present with one or more Ginetta G57s, plus entries from Atech-DXB from the United Arab Emirates, Graff Racing from France. Dutch team V8 Racing is running the Renault R.S. 01 in the PX class. Prototype action at Dubai Autodrome starts on Tuesday, 10 January, with two free practice sessions from 9.00 till 10.00 and 10.30 till 11.30 hrs, followed by qualifying from 12.00 till 13.00 hrs and the first race from 14.00 till 17.00 hrs. A night practice is scheduled from 18.00 till 19.30 hrs. The second race takes place on Wednesday, 11 January, from 9.00 till 12.00 hrs, the third race runs from 16.00 till 19.00 hrs.

No less than 99 cars entered for Hankook 24H DUBAI

The provisional entry list for the Hankook 24H DUBAI includes no less than 99 cars. The A6 class is the biggest one with 25 entries, including reigning 24H SERIES team champions, Hofor Racing, taking on its first race with the new Mercedes-AMG GT3. Further AMG GT3s are expected from Black Falcon, including local hero Khaled Al Qubaisi and Dutchman Jeroen Bleekemolen, SPS automotive performance, IDEC Sport Racing and HTP Motorsport, with five times’ DTM champion Bernd Schneider among the drivers. Gravity Racing International will be running its proven Mercedes SLS AMG GT3.

The SPX class includes three Lamborghinis, a pair of Vortex silhouet cars, and a Porsche 991 Cup MR car. The Porsche 991 Cup class includes twelve entries from nine different teams, including former overall 24H SERIES team champions Memac Ogilvy Duel Racing that has made the switch from the TCR touring car class. There are seven entries in the SP2 class, with two Porsches, a MARC Focus V8, an Audi TTRS, a KTM X-BOW, a Vortex and the Bovi Motorsport Brokernet Silver Sting, the Hungarian team making its 24H SERIES comeback after an absence of several years.

Fierce competition is also expected in the SP3-GT4 class, with no less than 20 cars representing Porsche (ten Porsche Caymans have been entered), Lotus, BMW, Nissan, Ginetta and KTM. Especially the competition debut of the new BMW M4 GT4, run by German outfit, Schubert Motorsport, is eagerly awaited. The TCR class has seven cars as four SEAT Leon TCRs are up against the brand-new Audi RS3 LMS, making its world competition debut in Dubai, and a Honda Civic run by UAE-based team Lap57 Motorsports. The A3 class includes eight cars from BMW, Honda, SEAT, Lotus, and Peugeot. Six BMW M235i Racing Cup cars will be competing for CUP1 class honours, while eight cars from Honda, Renault, and Peugeot have been entered in the A2 class.