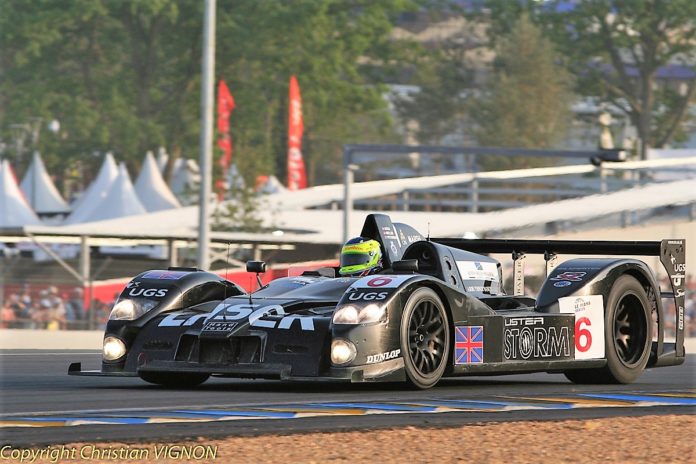 Second part of the interview given to Endurance-Classic by Laurence Pearce, Lister Storm Racing boss. After speaking about GTs, he comes today to the prototype topic.

Why did you choose the V8 LS6 Chevy for the Storm LMP ?

« At the time the Judd engine had not completed a 24 Hour race; the Chevy suited my concept and I was impressed by the Corvettes at Le Mans, it was low weight with a low centre of gravity but in hindsight I should have chosen the Judd . »

The Storm LMP was not as successful as the Storm GT. What have been the reasons why ? Lack of budget for development and testing, the engine ?

« Lack of success for the LMP 900 was mainly due to the engine development; then the rules changed and the LMP900 hybrid never worked properly due to the new aero regs not suiting the chassis.

There was also a lack of budget for this car. I believe the LMP900 could have been very successful in different circumstances and with a Judd engine. »

In 2003, for the first time of the car at Le Mans, it crashed during the practice session ? Had it been a big disappointment ? What were your expectations for this race ?

« It should have been a good race – with the Danish drivers the following year it did well. »

What were the main differences between the conventional Storm LMP and the Storm Hybrid LMP ?

In 2007, I believe that you had been thinking of purchasing a Pescarolo 01 ? Why did you drop this idea?

« We did purchase a Pescarolo 01 chassis with the aim of building a Pescarolo Lister; this did not proceed far due to lack of budget. I am now building the chassis as a Pescarolo. »

Jamie Campbell-Walter was very linked with Lister Racing . What can you say about J-C W ?

« JCW was a talented driver, he also worked in the company finding sponsorship etc so was a vital part of the team. »

Why did you sell Lister Cars (2012, I think) to Lawrence Whittaker ?

« He offered to buy the trademarks etc., I was not interested anymore in owning a race team unless it would have been for a major manufacturer. »

Do you still follow motorsport racing ? What do you think about its present situation (before the Covid-19 pandemia) ? Are you optimistic about the future of motorsport ?

« I do follow motor racing still but not so much the FIA GT/WEC – I find the long races not very interesting. I believe with the combination of COVID 19 and eco-awareness that traditional racing will become more difficult. The prospect of racing without spectators will be dull. I believe the future of professional racing will be electric cars. I also think there will be interest in modern historic racing. »

Is there any chance to see a Storm GT or a Storm LMP in events such as Aston Martin Masters Endurance Legends ?

« Yes, I am currently working on a couple of projects. »

We warmly thank Laurence Pearce and his wife Fiona (both of them, below, between the drivers and the mechanics at the 2003 Le Mans scrutineering).

Many thanks also to our friend Christian Vignon for his pictures.