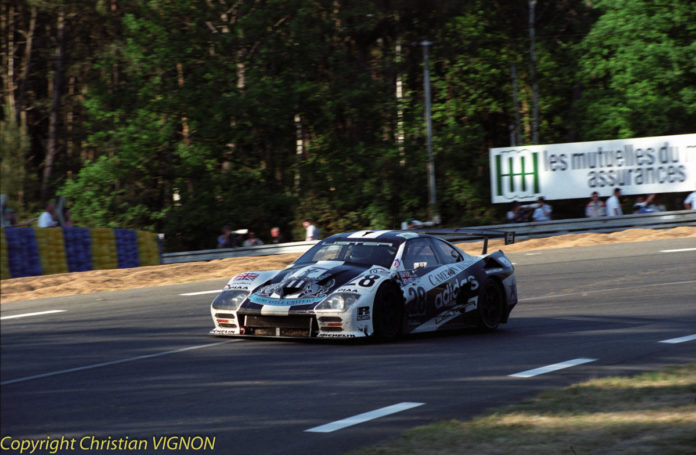 Listers were seen last in modern endurance racing by the end of 2006. A Lister Storm LMP Hybrid had been entered in the fourth round of the ELMS, the Donington 1000 Kilometres. The car has been racing at Le Mans in June and had claimed a podium in the first round of the ELMS, the Istanbul 1000 Kilometres. The car had been entered by Lister Storm Racing. Laurence Pearce , the charismatic boss of the team (below, during the Le Mans 2006 scrutineering, aside his drivers) had bought the brand to Brian Lister, its founder, in 1996.

Brian Lister had founded Lister Motors Company in 1954 and then he built prototypes -Lister-Bristol, Lister-Jaguar (Costin or Knobbly- which can be always seen in historic events such as Le Mans Classic.

After preparing many Jaguar XJS, Laurence Pearce decided to build his own car, powered by a V12 Jaguar V12, the Lister Storm GT. The car was a success, with the FIA GT Team title for Lister Storm Racing and FIA GT drivers title for Jamie Cambell-Walter and Julian Bailey.

In 2003, Laurence Pearce switched from GTs to prototypes with the Storm LMP900 and the Storm Hybrid, with less success than in GT. After retiring from racing in 2007, Laurence Pearce sold the brand to Laurence Whittaker who is going to revive the Lister Knobbly.

Laurence Pearce’s Listers, regardless results, have made their mark in the history of endurance racing by their unconventional design, either GTs or LMPs .

Laurence Pearce has kindly agreed to answer Endurance-Classic questions and to come back to the career of the Lister Storms, with at the end of the interview the possibilty of a Lister Racing return in a near future with a surprise…

Laurence, your father Warren has been the founder of WP Automotive. What influence ha him upon your career. Before taking over WP Automotive from him, what was your career as an ingeneer ?

« Warren was not the founder of WP Automotive, it was a joint venture between us to begin with but he retired after a short time. Apart from working with him as a mechanic on his Jaguars when I was a teenager, he had very little influence on my career as an engineer. »

What motivated you to use the Lister-brand name ? How this deal has been achieved ? Had your family some special links with Brian Lister ?

« Initially I helped BLE Automotive (Beatty, Lewis, Exeter) with developing their Jaguar engines then Brian Lister asked me to take over the Lister branding from them. Lister Jaguar Limited bought the trademark from him in 2000. »

After tuning Jaguar XJS , what led you to motorsport racing and to become a manufacturer ?

« Firstly I developed racing XJS’s for customers. This was followed by converting Jaguars to high performance specification which naturally led to modification of bodywork as well. The Lister Storm was a natural progression from this and it was this road car that led me to enter GT racing, starting with Le Mans and Daytona. »

Could you say some words about Mike Hughes and Andy Thornby, Storm GT and Storm LMP’s designers ?

« Mike Hughes came up with the styling for the Lister Storm road car, the design and engineering was all done by me. Tony Southgate helped with the development of the Storm GT as a race car as did Geoff Kingston. Andy Thorby was employed to design the LMP900 completely. »

The Storms -GT and LMP as well- were quite different of the other cars. Was it a deliberate choice or was it only due to Andy Thornby and Mike Hughes ‘s concepts ?

« Andy Thorby did a complete design and engineering of the LMP900 whereas Mike Hughes styled the Lister Storm Road car while I did the engineering, design etc. »

« The quality of the car was the centre of gravity, handling and downforce plus a strong engine – the FIA GT title was a huge achievement, but the British GT in 1999 meant a lot too. »

Why did you stop racing the Storm GT and switch to the prototypes with the Storm LMP ?

« The Storm GT came to the end of its’ racing career, although it was still competitive with the Maseratis and newer GT cars with the right drivers; the new generation of GT cars were designed to race. Lister had no budget for professional drivers so we had to rely on paying drivers more. The LMP900 seemed the way forward. Homologation did not require a road version. We also had a backer for this project. »

Thanks to Christian Vignon for his pictures

Classic car market remains resilient despite the uncertainty of the last...