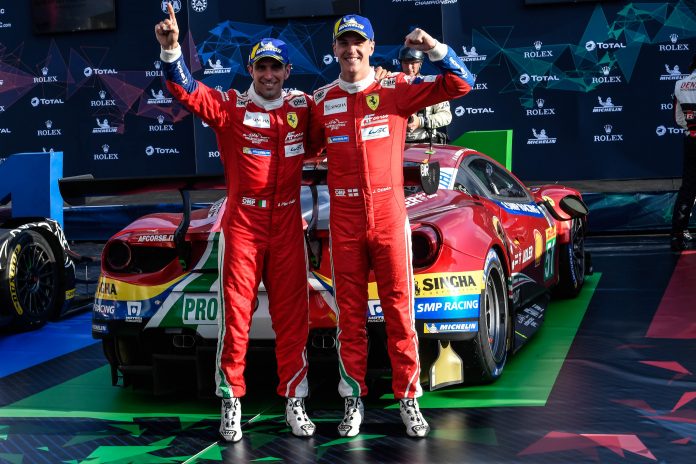 As they say in the world of distance running, “your head can go where your legs can’t”. The 6 Hours of Silverstone, third round of the Super Season of the 2018-19 World Endurance Championship boiled down to this for Ferrari no. 51 of AF Corse. After a stark performance gap in qualifying mainly due to the BoP that still separates the 488 GTE Evos from the GTE-Pro class leaders, the race saw an unexpected win thanks to the Italian team’s magnificent strategy and the skills of world champions Alessandro Pier Guidi and James Calado. It was the first victory for the car equipped with the Evo kit. However, the race only turned out well for car no. 51, with no. 71 hampered by an accident and the GTE-Am class cars quite off the pace for the entire race.

GTE-Pro. The prototypes plunged into chaos at the start, which also involved the GT cars in the second half of the group. The two Ferrari 488 GTE Evos were hit by other competitors but just suffered a few dents. Both Sam Bird and Alessandro Pier Guidi managed to move up a position. Bird, who put in an excellent stint, was in second before the pit stop. The first twist came after two hours and 20 minutes. A Full Course Yellow rewarded the fuel saving strategy of car no. 51, which was able to make its pit stop during the neutralisation period. This allowed James Calado to return to the track in second place, behind the Ford no. 66. Shortly after, the US car suffered a problem that gifted the lead to no. 51. However, the joy of seeing the 488 GTE Evo in front for the first time only lasted a few laps until the undercut tactic of Porsche no. 92 gave the advantage to Kevin Estre and Michael Christensen. Meanwhile bad luck dogged no. 71, which was hit by a prototype while in fourth with Davide Rigon at the wheel. The Italian had to drive a full lap on three wheels, which worsened the state of the car. The 488 GTE Evo came back on track after 34 minutes and finished in eighth place. Less than two hours from the end another Full Course Yellow was called and the masterful work by the AF Corse mechanics saw the Ferrari go back on track in front of the two Porsches. Again, the three top drivers made their pit stops during the neutralisation period, which the Ford no. 67 failed to do.

This put it out of the running despite being the fastest car on track. Alessandro Pier Guidi’s perfect management in the last 90 minutes finished the job to give Ferrari one of the most beautiful and deserved victories in its WEC history. Second place went to the Porsche of Bruni-Lietz, and third to the Ford of Priaulx-Tincknell.

GTE-Am. The Ferraris were in difficulty in the GTE-Am class. The 488 GTEs had already struggled in practice and things didn’t improve during the race. The best-placed Ferrari on the grid, car no. 54 Spirit of Race, crewed by Giancarlo Fisichella, Thomas Flohr and Francesco Castellacci, was involved in an accident at the start, losing three laps for repairs to the front end. Both car no. 61 of Clearwater Racing (Mok-Sawa-Griffin) and no. 70 of MR Racing (Ishikawa-Beretta-Cheever III) attempted a comeback but were frustrated by two drive-through penalties for speeding in the pitlane. In the end, the car of Clearwater Racing was the best-placed Ferrari, in fifth. MR Racing finished seventh, the no. 54 Spirit of Race ninth. The overall win went to Alonsso-Buemi-Nakajima on Toyota. The next round is on 14 October 14 at Fuji, Japan.