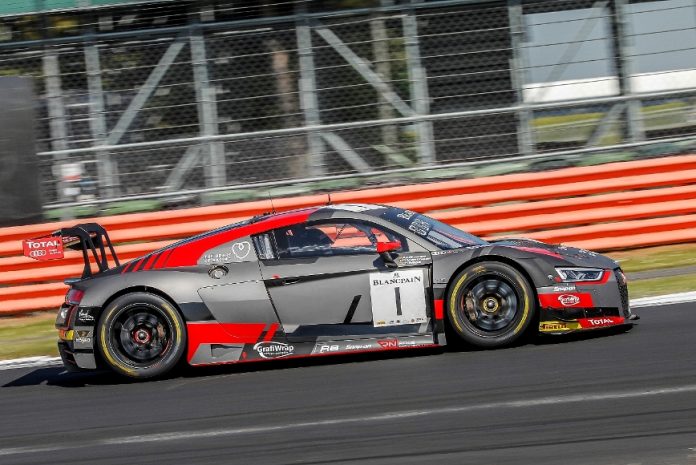 At the edge of the podium: the Belgian Audi Club Team WRT took a very valuable 4th at Silverstone, in the second round of the Blancpain Endurance Cup, thanks to Dries Vanthoor-Álex Riberas-Christopher Mies, who drove a solid and consistent race at the wheel of their Audi R8 LMS, finishing fourth, only 5 tenths off the podium. On the other car of the Belgian squad, Stuart Leonard-Marcel Fässler-Sheldon van der Linde, took 12th, just off the points. With this good result, the Belgian Audi Club Team WRT achieved its biggest objective: to keep the leadership in the points standings of both the Drivers’ and Teams’ rankings of the Endurance Cup and the overall Blancpain GT Series.

It has to be noted that the results of the Silverstone race are not definitive, as the Aston Martin that won was competing ‘sub judice’ after filing an appeal that suspended the sanction inflicted to it after qualifying because of a data logger infringement. The car could therefore start from the pole position it had conquered instead than from the back of the grid.

Team Principal Vincent Vosse was satisfied with the outcome of the weekend: “We knew that Silverstone is not the track that suits best our cars and we are happy with the overall result. We are collecting heavy points towards the different championships, especially considering that the cars ahead of us today did not took many points at Monza. We had a good pace but lacked a couple of tenths to be really competitive and fight for a podium position, but we showed consistency and took the maximum of what we could take.”

Like in Monza, the Audis of the Belgian squad did not seek stunning performances during free practice and pre-qualifying on Saturday. They again opted to preserve the limited number of new tyres, a strategy that has now been copied also by many rivals. The two cars remained around P30 in pre-qualifying.

On Sunday morning, the Qualifying exercise provided a real scale of values: car #1 took P5 on the grid (on the basis of the average of best laps by each driver), with Dries Vanthoor second-fastest in the initial session with full tank, while car #17 qualified in P17.

On a beautiful and sunny Sunday, the start was incident-free but extremely competitive. Car #1, with Christopher Mies at the wheel, lost a couple of positions in the initial laps, stabilizing then in P7, while Stuart Leonard on car #17 had an excellent kick-off and climbed up to P11. Both Audis pitted at the end of lap 29, respectively in positions 7 and 15. The second stint saw Álex Riberas keeping P6, close to the front-runners, while Marcel Fässler climbed up to P14. Car #1 did again an early second pit stop, with car #17 staying on track to more laps to try to reduce the gap.

In the final stint, Dries Vanthoor, from P5, gained one position as he passed the Mercedes from Buurman and started pressing seriously the Lexus in P3 in the closing laps. This time, though, the Belgian finished 5 tenths shy from the podium. Similarly, Sheldon van der Linde performed his own charge to take final P12.

The next round of the Endurance Cup will be one of the stellar events of the season, the longer Paul Ricard 1000 km event, partly a night race taking place on the eve of Saturday 2nd July.

History beckons as 11 manufacturers bid for Total 24 Hours of...