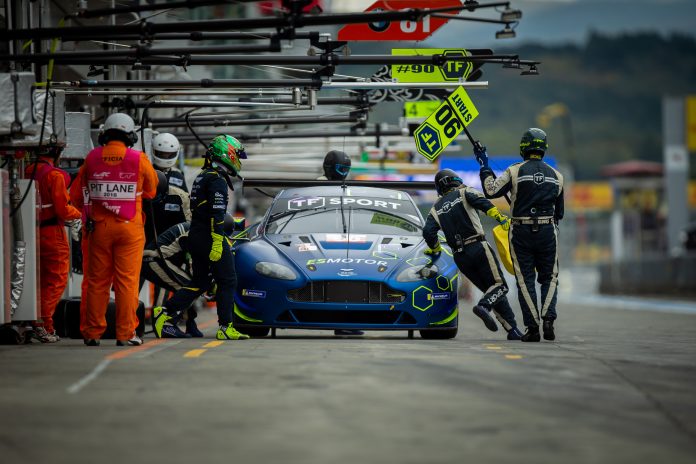 The event marks the team’s first visit to China as they prepare for the 6 Hours of Shanghai and then their Asian Le Mans Series debut with Red River Sport the following weekend.

The team has enjoyed great results already this year in WEC, finishing a fighting second on their debut at Spa Francorchamps, while seeking victory at Silverstone ahead of a late race penalty that ultimately resulted in another runner-up position. Last time out at Fuji, the team were again the bridesmaid, so heading to China, the top step of the podium is the natural target.

Salih Yoluc, Charlie Eastwood and Jonny Adam return to the #90 Aston Martin Vantage GTE, third in the championship standings with 54 points. The action gets underway with free practice on Friday ahead of qualifying on Saturday. The 6 Hour race starts Sunday at 11.00 local time, 03.00 GMT.

Tom Ferrier, TF Sport Director
“I’m very excited about the next round of the Super Season. Competition-wise we still seek the top step, but championships are won by consistency and we know that.

“In terms of going to China, it’s probably the most culturally different place we race at, we can’t use hire cars and need translators, so it will be a very interesting two weeks (with the team’s debut in Asian Le Mans Series taking place the following weekend) and something that all of us at TF Sport are looking forward to.”

Salih Yoluc
“We have finished second three times already this year, so we are really looking to try and get on the top step in Shanghai. It will be my first time there, but we have a strong team in TF Sport, so we will get plenty of laps in practice to be ready for qualifying and then the race.”

Charlie Eastwood
“Really looking forward to Shanghai, we have been so close to getting the win on three occasions now, so we need to piece it all together to get the top result. Shanghai is a new track for Salih and myself, so it will be an extra challenge as it’s a very technical track, but we are more than up for the challenge.”

Jonny Adam
“The Shanghai weekend is a crucial point in the WEC Super Season. The momentum is high with two straight podiums now and if we can get a strong finish the championship looks promising going into the winter break.

“As a circuit Shanghai is very technical with high tyre degradation so getting the most from our Michelin tyres is key. TF Sport always procure a fast Aston Martin Vantage GTE and Salih/Charlie are a strong combo. Let’s see how the race plays out!”

Rebellion Racing will be in LMP1 category for the 2018 FIA...