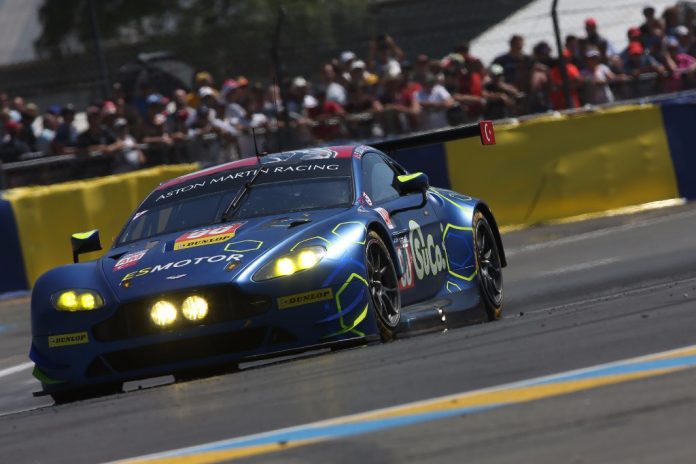 Having secured a sensational double Road to Le Mans double victory, confidence on Saturday (17 June, 2017) was high at TF Sport ahead of the 24 Hours of Le Mans, the very first for the British-based team.

Fielding the #90 Aston Martin Vantage with race regulars Euan Hankey and Salih Yoluc, the duo were joined for this event by Rob Bell, a veteran at Circuit de la Sarthe.

Bell took to the start from eighth position on the grid, making gains from the outset. The British racer pitting at the one hour mark for fuel and tyres. A strong stop from the TF Sport crew saw him exit third in the LM GTE Am class, chasing the #40 Aston and #39 Ferrari.

The pattern was set as Yoluc and Hankey took turns behind the wheel of the #90 Aston Martin. The latter enjoyed a particularly impressive run at the four-hour mark, at times lapping up to seven second quicker than those ahead. Hankey closed in on the #84 Ferrari before Salih took over as the sun started to set as the battle continued for second position in class.

At mid-distance, Hankey continued to run in second position, one lap adrift of the #84 JMW Motorsport entry and over a minute clear of the third-placed #55 Ferrari. Late into the night however, things took a turn for the worst as Yoluc went off and whilst able to return to the pits following assistance from the gravel trap, significant time was lost.

With five hours remaining, the team had completed a brake and splitter change and ran in ninth position with Bell behind the wheel, but at this point it became clear that hopes of a third victory of the week at Le Mans, were all but dashed.

“We completed our aim of finishing the race,” said TF Sport Director Tom Ferrier. “We showed great speed, but our incident took away a chance of going for the triple. The Aston Martin Vantage proved to be bullet-proof as ever and the team did a great job in the stops and to make repairs early this morning. A big thanks to all the team and AMR for their relentless work.

“As I’ve said before, we can’t win them all, but we did our very best here this week and took away two wins and put in a strong performance in what is the biggest race of the year and at our very first attempt.

“We can be very proud of our race and all of the hard work that went in to the programme. Now we regroup and get ready for the next round of the European Le Mans Series next month in Austria where we know we’ll be fighting for wins again.”