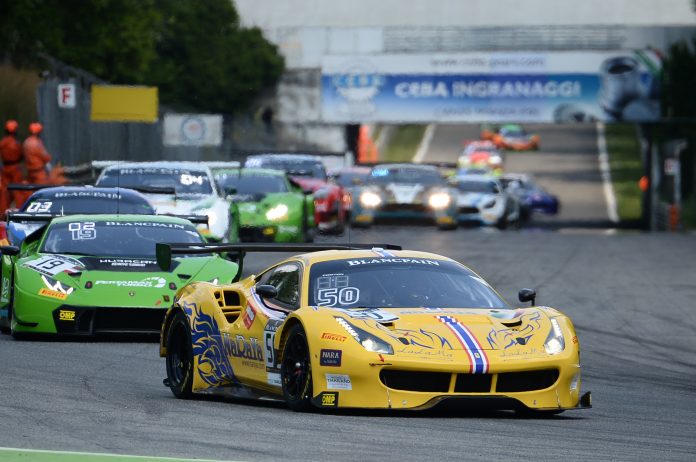 It proved to be a very strong weekend for the 23-year-old Thai driver as the trio qualified the car on pole position with the team electing Pasin to start the race. Immediately at the green lights he was very lucky to avoid becoming engulfed in a major pileup of cars on the start-finish straight that played out around him and that saw the race red flagged for half an hour as the track safety crews worked quickly to remove the stricken cars. More than a dozen cars were unable to take the restart.

After settling into his stint at a hot and dry Autodromo Nazionale Monza Pasin handed over to Michele after an hour and in turn he passed the car to Alessandro for the final third of the 3-hour race. Both the Italians showed great pace but due to the Ferrari’s BoP which restricted its power they struggled to get past the defensively driven #75 Audi in front as they chipped away at the podium positions and that time lost ended their chance of chasing for P1.

In the end Alessandro brought the #50 Ferrari over the line for a superb second place overall to get the new Blancpain GT season off in great style.

This is Pasin’s second season in Blancpain GT and his fourth racing in Europe. It’s also a second year that he is sharing this car with Michele and Alessandro so it’s a very settled and rounded driver line-up and clearly from the laptimes it’s a combination that has the pace to win. It’s also good for Pasin to get a healthy chunk of points on the board as this time last year here in Monza – on his Blancpain GT debut as well as his debut in the Ferrari 488 GT3 – the trio also showed plenty of pace but a late race DNF left them without any reward for their efforts.

Pasin Lathouras: “It was good to be back on track and get the season underway and blow off the cobwebs as I haven’t raced since December; I love Monza so there isn’t any better way to get it started really. We had good pace all weekend and the team did a great job, Michele and Alessandro drove superbly as usual and the car felt very good when we were on our own but as it’s a low downforce track when we caught up with another car we lost out at the exit of the corner as we can’t carry as much speed as usual, plus we don’t have that much power in the straight due to the BoP so it was almost impossible to overtake during braking. So I’m very pleased that we were able to put all this together and finish in second place. Now I’m looking forward to racing at Silverstone, another track I enjoy, and hopefully we can target the podium again and keep in the championship points.”

The Lamborghini Huracán GT3 wins the first round of the Blancpain...