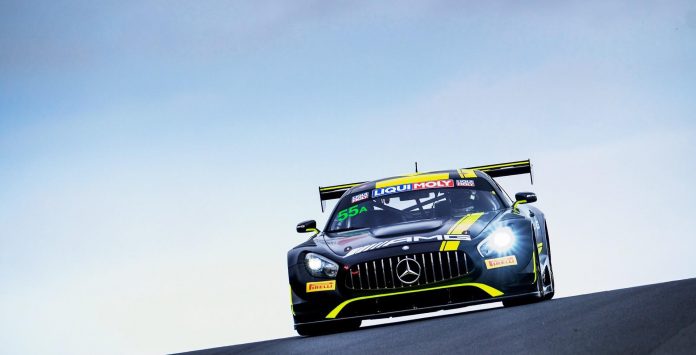 Strakka Racing took home a top-ten result at the Bathurst 12 hour, with car #55 finishing the race in seventh place and third in the PRO-AM class. The team made their Intercontinental GT Challenge debut in two of three Mercedes-AMG GT3’s, with car #55 driven by Nick Leventis, Cameron Waters, Lewis Williamson and David Fumanelli and #56 driven by Max Götz, Maxi Buhk and 2016 winner Alvaro Parente.

The spectacular race started in total darkness in the early hours of the morning (5.45am local time) at the iconic 6.213km Mount Panorama Circuit. Strakka Racing’s #55 PRO-AM car started 6th on the grid, and was able to effortlessly work its way up the ranks amongst the front runners, with faultless stints from Leventis and his team, even racking up several laps in the lead.

After qualifying in 11th, the #56 car ran smoothly until just before the end of the first stint, but unfortunately was soon compromised after a strike against the barriers after Buhk had contact with another car whilst battling for position on lap 30. Despite the teams’ best efforts to fix the car in the pits, the car fell a few laps behind and time could therefore not be made up for.

With just twelve minutes to spare until the chequered flag, an accident at Sulman Park corner resulted in the race being suspended due to the extent of debris scattered across the track. While running 7th, #55 was one of only two cars on the lead lap with fuel to go to the finish, with five cars needing to still pit for fuel meaning that an overall podium was possible until the race was called off.

The team were delighted to get the podium, but the way the race ended was unfortunate. The #55 car finished in seventh place overall, equalling third in the PRO-AM class.

Nick Leventis – Strakka Racing #55: “I am really happy to come away with a podium in our opening race here in Bathurst. It’s a fantastic event and to stand on the podium after a faultless race and a faultless run in the Mercedes AMG is a truly great feeling”.

Maximilian Buhk – Strakka Racing #56: “I always love being here at Bathurst. Therefore, it is even more regrettable that an incident set us back so much after one hour into the race. After that, we were left without a chance. Nevertheless, the team made great effort debuting the Mercedes-AMG GT3, and I am truly grateful for their hard work”.