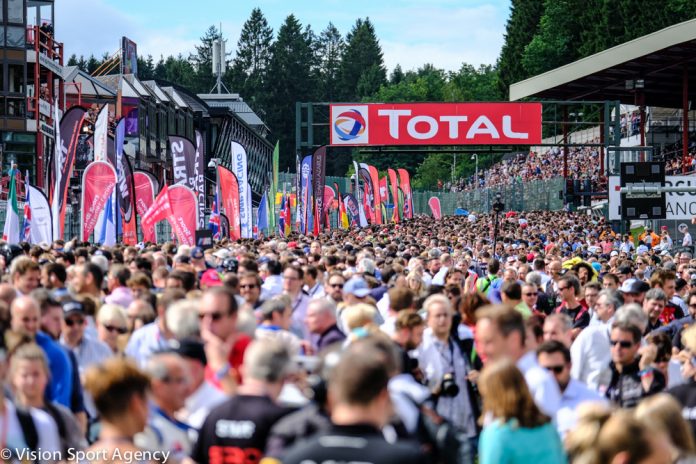 Ahead of this year’s 70th edition Total 24 Hours of Spa, SRO Motorsports Group founder and CEO Stéphane Ratel discusses the importance of the Belgian endurance classic to the past, present and future of the organisation.

THIS YEAR MARKS THE 70TH RUNNING OF THE TOTAL 24 HOURS OF SPA. WHAT MAKES IT SUCH AN ENDURING EVENT?

“Above all, it is one of the great classics of motor racing. Part of what makes it so special is that Spa was always a very different kind of layout, particularly with the old 14km circuit. Now, at 7km, it is still one of the most iconic tracks in the world. It is considered by many to be the most beautiful circuit in Europe, so it is firstly about the venue itself.

“Then you have the unpredictable weather conditions, which have built a legend around Spa. You must pay tribute to a very passionate Belgian public, who have been attending for many years and supporting the event. We also need to thank the touring car categories that made the 24 Hours so unique. There were always long-distance sports car races, but Spa was special because it was a long-distance event for touring cars. And, of course, it has since become the first long-distance GT-only event.”

HOW IMPORTANT IS THE TOTAL 24 HOURS OF SPA TO SRO MOTORSPORTS GROUP?

“It has been the cornerstone of everything we have done, first with the Blancpain Endurance Series and more recently with the Intercontinental GT Challenge. It is the biggest race for the GT3 category and for our series. That was true when we arrived and it remains the case now, so it has been a constant for us

“Our involvement has been a two-step process. At first we were only bringing the FIA GT Championship, working with the late Jean-François Chaumont, who was the long-time promoter and organiser. Then, we took over full responsibility for the organisation as part of the Blancpain Endurance Series in 2011.

“Spa is the only event for which we have a dedicated office, located in Liege, which shows how important it is to us. The whole SRO team will be at the race working on the organisation, and I trust them fully, while our team from the Pirelli World Challenge will also be joining us this year.

“So it is extremely important. In fact, it is essential, because every successful championship around the world needs its blue riband event. For us, that event is Spa.”

HOW HAVE YOU SEEN THE EVENT CHANGE SINCE YOU FIRST ARRIVED IN 2001?

“In a world where many motorsport series have experienced a general decline, Spa has been growing. In fact, it has grown more than is immediately obvious.

“Around 20 years ago the event was sold to a sponsor by allowing them to invite people to attend for free. For many years it was the Proximus 24 Hours of Spa, and anyone who had a Proximus mobile phone contract could be invited. Considering that this accounted for half of Belgium, it had almost become a free event! This meant there was a huge crowd, but not many people were paying.

“Progressively, fewer and fewer free tickets have been distributed, so the number of spectators not only grew significantly, but the number of paying spectators grew exponentially. In fact, in terms of promotion, I believe that Spa remains one of the fastest-growing motorsport events in Europe.”

THERE WILL BE 13 DIFFERENT BRANDS ON THE GRID THIS YEAR. WHAT DOES THAT MEAN TO YOU AND TO SRO?

“There will be 13 brands and 12 factory engagements, which is unique both historically and in today’s motorsport market. I truly think that it is the best race in the world in terms of the number and diversity of the cars, the number of professional drivers and factories entered, the unpredictability, and the closeness of the BOP. I would like to see a reasonable argument that says there is a better race in the world than this.

“A few years ago, someone said to me: ‘You have more than 60 cars on the grid, what else can you dream of?’ I answered that I could simply dream that we would have manufacturer involvement from Ferrari and Porsche. Today, we have broken that barrier. We used to call them ‘the gang of four’ – Porsche, Ferrari, Aston Martin and Corvette – the manufacturers that only cared about Le Mans. They had GT3 cars, but only for commercial reasons and with no direct involvement.

“That has now changed as Ferrari has placed some of their factory drivers into a car, Porsche has two official cars through Timo Bernhard and Manthey Racing, while Aston Martin has R-Motorsport running its factory drivers. So today three of the four are with us, while the other does not have a factory-built GT3 car.

“Now, if someone asked me what else I could hope for… well, I could dream that we would be live on the BBC, RAI, France Television, ABC and so forth! But, from a sporting standpoint, there is nothing more we can dream of.”

IS THERE ANYTHING THAT YOU FEEL COULD BE IMPROVED?

“Nothing is ever perfect. I would say that Spa is the best 12-hour race in the world, because from 4pm until 4am it is simply the greatest.

“Its only small weakness comes after this. Spa is still very much a Belgian event and extremely important to the local population. You have a lot of people who come, attend the party in the evening, and then go home. Camping is quite limited on-site, so what we need is to have more people staying overnight to make the Sunday even busier.

“So that is a little weakness, but perhaps it is the result of many spectators living locally and Belgium being a smaller country. People can drive home, even if some maybe should not after the party!”

DO YOU HAVE A FAVOURITE MOMENT DURING THE 24 HOURS?

“There are a number of great moments throughout the week. Honestly, I should get there earlier, but it is almost a tradition now that I arrive on Wednesday in time for the parade. When I reach Spa town, that is a great moment in itself.

“I have my little habits. I will always sit and have a beer at one point, because you need to have a beer in the centre of Spa town! And then the parade is a great moment. I can tell you that in the early 2000s there were people in the town centre, but after that an empty road. Year on year it has been growing and growing, and now it stretches for hundreds of metres with people. That is a direct measure of the success of the event.

“Of course, the grid is special, if maybe a bit too full now! The driver briefing is magic as well, in the theatre with so many drivers present. The party in the evening is also fantastic and every year I go into the crowd to feel the ambiance. Really, there are many great moments.”

TO FINISH, COULD YOU DESCRIBE THE TOTAL 24 HOURS OF SPA IN A SENTENCE?

“It is quite simply the best in the world.”