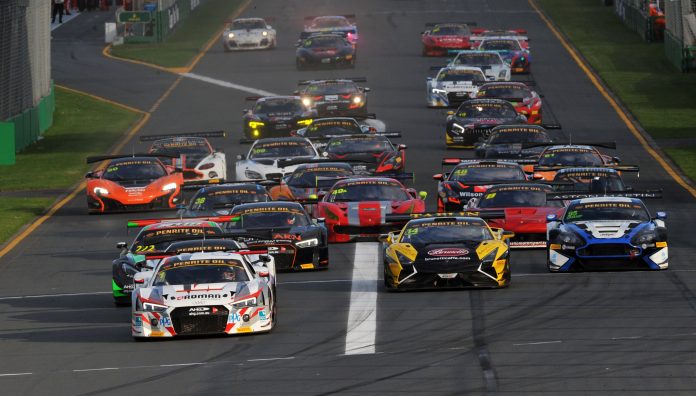 The country’s leading sportscar drivers will be joined by a host of internationals as the CAMS Australian GT Championship heads to the Formula 1 Rolex Australian Grand Prix next weekend.

The second round of the 2017 Championship boasts a 30-car field with representation from seven of the world’s leading brands including Ferrari, McLaren and Mercedes who will take to the 5.3-kilometre circuit in front of their Formula 1 counterparts.

Adding to the F1 flavour, the Australian GT field will ex-Ferrari star Ivan Capelli, who will drive the Pirelli/Trofeo Motorsport Lamborghini Huracan GT3 alongside Jim Manolios.

The Italian veteran last competed in Australian GT at the inaugural event at Highlands Motorsport Park in 2013; next weekend marking his debut at the Albert Park circuit.

Two more Lamborghini Huracans will also take to the circuit, with Adrian Deitz and Cam McConville set to debut the Timken Zagame Motorsport entry, and Andrew Macpherson poised to give the AMAC Motorsport its first taste of race action.

Geoff Emery and Kelvin van der Linde again combine forces in the #74 Valvoline entry and stablemate James Koundouris, who was a winner at Albert Park in 2016, is again joined by Ash Walsh in the Supabarn Supermarkets Audi R8 LMS.

Making only his fourth Australian GT appearance, and his first since 2007, Dean Fiore will join Marc Cini in the Hallmarc Constructions Audi R8 while Tim Miles will switch into the #75 Valvoline Audi R8 LMS in place of Steve McLaughlan for the weekend.

Fresh from success in Adelaide, Championship leader Tony Bates will race solo aboard the Moveitnet/AFS Mercedes-AMG GT3 as part of a four-pronged assault from the German marque.

Winners last year, Scott Taylor and Craig Baird will be looking to repeat that success this time around, while Max Twigg, a former round winner at Albert Park, will build on his first outing with the team in Adelaide in the Australian Engineered Flooring entry.

A change in co-driver for Fraser Ross will see the Tekno Autosports driver joined by McLaren factory star Lewis Williamson.

The 27-year-old Scot cut his teeth in single seaters, winning the 2009 BRDC Rising Star award and last year competed in the World Endurance Championship with Strakka Racing in the LMP2 class.

Together, Ross and Williamson make a formidable pairing for Tekno Autosports, which last year claimed a race win courtesy of Nathan Morcom.

Twelve months ago McLaren took out the weekend thanks to Klark Quinn, with the Darrell Lea McLaren 650S GT3 this year set to be driven by Tony Quinn, while the Objective Racing entry will again be steered by street circuit expert Tony Walls.

Having made its global competition debut at the Grand Prix twelve months ago, Peter Edwards will pilot the Maranello Motorsport Ferrari 488 GT3, while international racers Hector Lester (an Albert Park race winner in 2008) and Benny Simonsen will share the Rosso Verde Racing Ferrari 458 GT3.

A third Ferrari has been entered for Wayne Mack, who will steer the Mack Roofing Products Ferrari 458 GT3 across the weekend’s four races as one of three Invitational Trophy entries.

An experienced racer, Stuttered will take charge of the DJS Racing BMW M6 GT3 which will run alongside the sister car driven by Steve Richards and James Bergmuller.

The four 25-minute races follow the same pattern, with the higher rated driver set to compete in races one and three, and the team’s second driver in races two and four with no pit stops or time added post-race.

Teams electing to enter a single driver will take part in all sessions.

Together with points for qualifying it makes the weekend equal in value to all other CAMS Australian GT Championship weekends, with a maximum of 220 points on offer.

The packed 30-car field will battle it out on track starting with two qualifying sessions and the opening race on Thursday (March 23).

Fans can experience the CAMS Australian GT Championship on track every day of the event, or catch the action on live free-to-air television across Australia, with Race 3 to be broadcast on Channel Ten.

Liam Talbot ends on a high at Albert Park