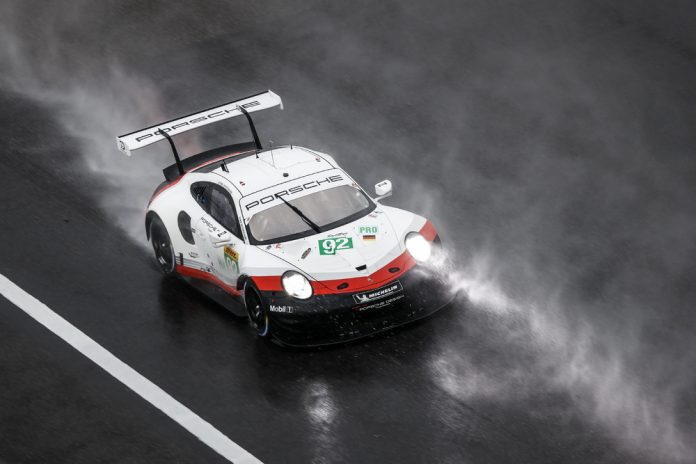 Both Porsche 911 RSR fielded by the Porsche GT Team finished on the podium at the FIA World Sports Car Championship WEC in Shanghai. Heavy rain caused a turbulent race and led to multiple safety car phases, red-flags and many changes of position on the racetrack. After six hours and a strong team effort, the No. 91 Porsche 911 RSR crossed the finish line in second place. The cockpit of the 510 hp sports car was shared by the Austrian Richard Lietz and Gianmaria Bruni from Italy. The No. 92 sister car driven by Kévin Estre from France and the Dane Michael Christensen came third in China. A total of eleven vehicles run by six manufacturers battled for GTE-Pro class victory on the 5.451-kilometre Shanghai International Circuit. Thanks to this result, Porsche has extended its lead in the manufacturers’ and drivers’ championship.

Porsche also had reason to celebrate in the GTE-Am class. The three Porsche 911 RSR campaigned by the customer team Dempsey Proton Racing and Project 1 concluded the race on positions one to three. Climbing to the very top of the all-Porsche podium was Porsche Young Professional Matt Campbell (AUS), Christian Ried (Germany) and Porsche-Junior Julien Andlauer (F), who shared driving duties in the No. 77 Porsche 911.

Spectators were treated to a heart-stopping finale in both categories. Persistent downpours and the onset of darkness required utmost concentration from drivers. At the wheel of the No. 91 vehicle, Lietz fought his way from fourth to second place in the final 40 minutes. In the 911 with the starting number 92, his brand colleague Christensen overtook a rival in the last lap to secure position three.

In the GTE-Am class, Porsche works driver Jörg Bergmeister from Germany driving for the Porsche customer team Project 1 swept past the second Porsche 911 RSR fielded by the Dempsey Proton Racing squad in the penultimate lap and took the flag in second. Sharing the cockpit of the No. 56 car with Bergmeister was Patrick Lindsey (USA) and Egidio Perfetti (N). Position three was occupied by the No. 88 vehicle of Dempsey Proton Racing with drivers Khaled Al Qubaisi (UAE), Riccardo Pera (I) and Porsche Young Professional Matteo Cairoli (I). The Gulf Racing trio, Michael Wainwright (GB), Ben Barker (GB) and Porsche-Junior Thomas Preining (A), finished on ninth place.

Round six of the FIA World Sports Car Championship WEC will be contested in Sebring on March 15, 2019.

Comments on the race

Dr Frank-Steffen Walliser (Vice President Motorsport and GT Cars): “After the first three hours of the race we were very uncertain whether it was still a race. But it turned into a brilliant event. Our drivers with Nordschleife experience underlined their prowess. Finishing second and third earned important points towards the world championship, it also expanded our lead, and we’re heading home from Shanghai feeling very happy. We’re also extremely pleased to have extended our collaboration with the Manthey Racing team for the next two WEC seasons. In the GTE-Am class Porsche locked out the entire podium. I’m thrilled for all three. A fantastic job – it doesn’t get any better than that!”

Gianmaria Bruni (Porsche 911 RSR #91): “We finished on the podium with both vehicles. That’s fantastic and I’m proud of the great team performance, particularly with the pits stops. We managed to do here what we missed out on at Fuji. For me, that’s the Porsche spirit! Richard drove brilliantly and things went well for me especially at the end, although the rain and falling darkness made conditions very difficult.”

Richard Lietz (Porsche 911 RSR #91): “It was a hard-fought second place. A wonderful result for the team. I’m really thrilled about that because they all worked really hard. We can be proud. The conditions were difficult. We opted for the right tyres at the right time. The start with all the spray was chaotic, but then it got better. I found the final 30 minutes, when dusk fell, especially tricky. Still, the No. 92 still managed to bring home P3.”

Kévin Estre (Porsche 911 RSR #92): “What a huge race! The water on the track and the light conditions at the end made it super difficult. We made the most of it and didn’t make any mistakes. Michael put in an inspired drive in the final lap to score third place. The double podium is a wonderful achievement for Porsche.”

Michael Christensen (Porsche 911 RSR #92): “That was a crazy race for us. Over the six hours it went back and forth with the positions for us. Ultimately, everyone delivered an excellent performance, that’s the best way to describe it. The team, the car, Kevin and I – we all gave our utmost and that put us on the podium.”

Jörg Bergmeister (Porsche 911 RSR #56): “The race was interesting. I didn’t do much driving but in the end it worked out just fine. In the penultimate lap I managed to get past Matteo Cairoli and we finished on second.”

Matt Campbell (Porsche 911 RSR #77): “I’m over the moon with our win. The race was anything but easy. Christian had a hard time, especially at the start. When Julien then climbed into the cockpit the situation eased up and the team did a super job strategically. The track conditions changed again for the worse during my stint and it was a very challenging driving experience.”

Thomas Preining (Porsche 911 RSR #86): “It certainly wasn’t an easy race. In the beginning there was a lot of water on the track and the safety car was deployed several times. My teammate Michael experienced aquaplaning and hit the guardrail. This caused quite some damage, which the team did a great job of repairing. My stint wasn’t flawless unfortunately, but even though it isn’t shown in the result, we’ve made good progress since Fuji and we had the pace.”

Matteo Cairoli (Porsche 911 RSR #88): “We finished on the podium in Shanghai and that’s great. Today, the car proved difficult to drive towards the end. I did my best but ultimately the others were simply faster. We have to take a good look at the reasons for this. But I’m happy for my teammates with their victory. They deserve first place at this race.”

Mexico : Davide Rigon and Sam Bird on pole in GTE-Pro