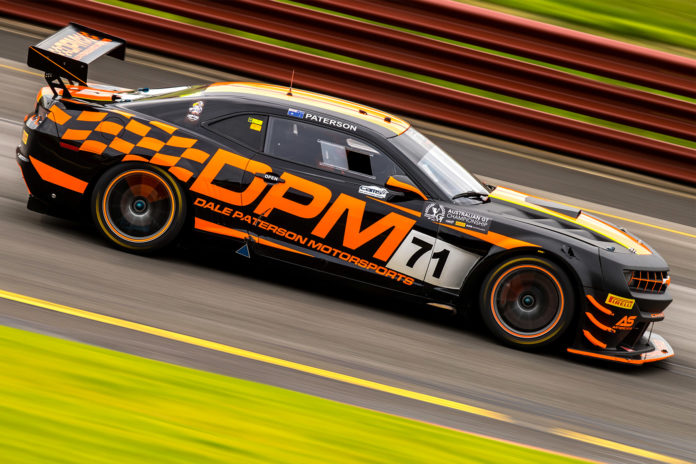 The second event on the 2020 Australian GT program comes at Melbourne’s legendary Sandown Park Raceway this weekend, with the opening race of the ten-round Australian GT Trophy Series, an event that will see a shift from the traditional Trophy Series rounds, with registered teams competing within the opening round of the Victorian State Circuit Racing Championships, for half championship points.

In a new initiative for Australian GT, two early season events have been scheduled for Trophy Series competitors in Melbourne and Sydney to get their season underway ahead of the full point-scoring round at Phillip Island on March 20-22 as part of the support act to the GT Sportscar Festival (Rnd#2 of the Australian Endurance Championship), a chance to shake down cars and drivers ahead of the season proper.

Leading the charge at Sandown will be reigning Australian GT Trophy Series champion Dale Paterson in his crowd-pleasing 7.9-litre Chevrolet V8 powered Camaro GT3, the local driver keen to defend his 2019 title, and he feels there’s nothing better than a shakedown run in his own backyard, at the very circuit in which he wrapped up the 2019 title.

He won’t have things all his how own way though, with Audi team-mates Matt Stoupas and Gary Higgon also entered in the field, Stoupas in the Generation 1 ultra that took him to second in the Trophy Series points standings in 2018, whilst Higgon will campaign his Generation 2 R8, both cars resplendent in the colours of KFC.

Joining the Trophy Series trio will be a pair of Lamborghini Huracan Super Trofeo EVOs led by the car that claimed second in points for Trofeo Motorsport’s Jim Manolios in 2019, whilst the second entry will be campaigned by three-time Australian F2 Champion Arthur Abrahams who makes a return to competitive motorsport after a sabbatical of almost 20 years.

Abrahams is a name well known to race fans in Australia, the three-time national champion has an extensive resume that includes racing Indy Lights in the USA (1989/1990) and Formula Holden (1994/1995/1996) amongst other things, whilst he has also contested sportscar races in Europe (1988 World Sportscar Championship) and been a team owner in the V8 Supercars Development Series era.

Both Huracan’s turned laps of Phillip Island Grand Prix Circuit during an ‘On Track Events’ day on Wednesday, with Abrahams suffering an early setback in the changeable conditions in a car in which he has campaigned a number of track day events across the last six months. Both cars will contest the AGT Trophy Series – Trofeo Challenge – division, the winner of which was Nick Karnaros in his Type 991 Porsche GT3 Cup Car last season, the Victorian expected to return to defend that title come the Phillip Island round in March.

The season-opening Trophy Series event will begin with three practice sessions on Friday, 14 February ahead of qualifying and the opening race (2:03pm) on Saturday, with Sunday’s 40-minute race two coming at 1:28pm.