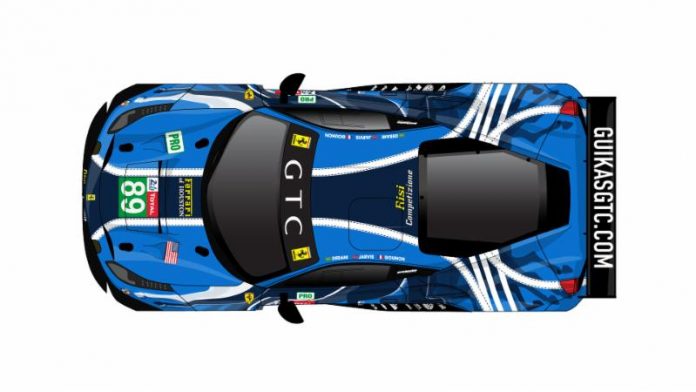 The Risi Competizione team is proud to share its unique livery for the Ferrari 488 GTE-Pro entry in the 87th annual 24 Hours of Le Mans race, June 15-16.
For this year’s race Risi Competizione has connected with Jean Guikas and the French Ferrari Owners Club for a Franco-American alliance with its No. 89 GTE-Pro entry fielding drivers Pipo Derani of Brazil, Oliver Jarvis of England, and Jules Gounon of France.
The colors of the one-off livery reflect a French blue background (France) and navy blue and white stripe (USA). The Thoroughbred horse creates an almost mythological and breathtaking livery designed for the most legendary motor racing in the world. It embodies both the Greek chariot, whose leather harness were held by the charioteer, and the wild riding cowboys of the American West.
Inspired by chronophotography (a Victorian era (1867-68) photographic technique which captured movement in several frames), the legs of the horses symbolize the driving force of the car and echo the emblem of its brand — Ferrari.
In tribute to those who inspire this commitment, the reins are ‘held’ in the rear by the NART, the racing team founded by Luigi Chinetti, pioneer of the Ferrari racing adventure, and by the founders of the French Ferrari Owners Club, initiators of the last Franco-American victory in 1981 (IMSA category). NART is celebrating its 70th anniversary of the first Le Mans victory this year.
The livery was imagined and designed as part of a contest that brought together 21 pairs of students from different sectors of ENSAAMA (School of Art and Design), a decorative arts school in Paris, France. The thoroughbred is the work of Chloélia Breton (a student in the Digital Design section) and Louise Doublet (a student in the Stained Glass section). The final technical livery art was created by Andy Blackmore, of Andy Blackmore Designs, known for his motorsport livery designs, vehicle automotive styling and spotter guides.
“We decided to undertake a unique concept for the livery design of our Le Mans entry this year in conjunction with our French friends,” said Team Principal Giuseppe Risi. “Allowing students from the prestigious ENSAAMA art school in Paris to conceive an exclusive design that embodies a collaboration between our French Prancing Horse supporters, along with the heritage of Ferrari and history of our American Risi Competizione team, produced a special opportunity. Although in the past we have always competed under the Rosso Corsa red of Ferrari, this will be our first time to field a car in blue. It may take some of our fans by surprise and require a minute to digest, but we are pleased with the final livery outcome. We appreciate Andy Blackmore translating the original work from the art students into a livery for the shape of the 488 and ready to unveil at Le Mans.”
Risi Competizione is one of 17 GTE-Pro teams and one of just three Ferrari 488 GTE Evo entries on the 60-car entry list.
Risi Competizione has fielded 14 cars over the past twenty years at the legendary 24-hour race in Le Mans, France, including three victories (1998 in Ferrari 333SP, 2008 and 2009 in Ferrari 430GT), and five additional podium finishes, including last year’s third-place finish. The Risi team, with its Ferrari F142M, V8 twin turbo 488 GTE model, shod with Michelin tires, will be keen to collect their first victory at the Circuit de la Sarthe in 10 years.