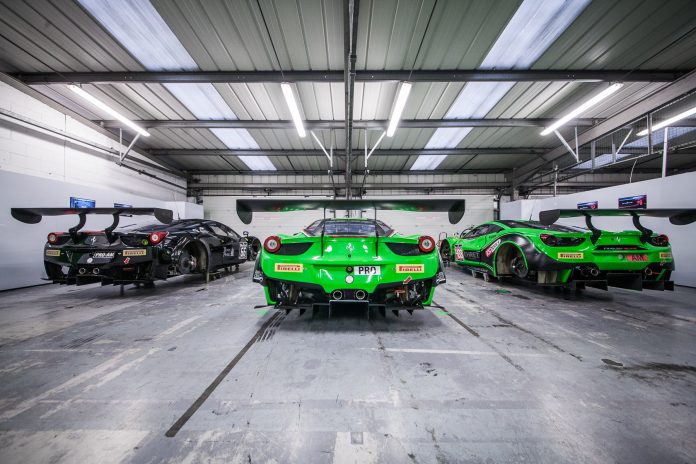 After the successful Blancpain GT Series season in 2016, Rinaldi Racing will take part again in the racing series. In total the team from Mendig will start with two Ferraris 488 GT3.

There will be ten racing weekends in the season; five in the Blancpain Endurance Series, and also five in the Blancpain Sprint Series. The racing events will take place at the most beautiful racetracks from Europe. Highlight will be the 24 hours race in Spa-Francorchamps, where Rinaldi Racing will intend again to claim another podium. Also, Rinaldi Racing is looking forward to their home race at the Nürburgring in September.

In the Blancpain Sprint Series, Alexander Mattschull and Daniel Keilwitz will share the work behind the steering wheel of the Ferrari 488 GT3 with the starting number 333. In the Blancpain Endurance Series, the Russian Rinat Salikhov will complete the car. Both times they start in the Pro-Am class.

Furthermore, in the Blancpain Endurance Series, the Ferrari 488 GT3 with the starting number 488 will compete. The driver line-up will be Pierre Ehret and Rino Mastronardi. At the moment the third driver is unknown. The car will start in the AM class.

Also, Rinaldi Racing will take part in a few races of the Blancpain GT Sports Club with one Ferrari. Christian Hook will drive the black Ferrari 458 GT3 with the starting number 33.

First, the team will travel to Paul Ricard in mid-March for the official Blancpain test.

Michele Rinaldi: „We are really looking forward to the Blancpain GT Series. The racing calendar is well balanced and promises to be an exciting season. Both cars all well cast to reach excellent results. The mixture of our experienced amateur drivers and professional racing drivers is well chosen. First, we will have a few tests in March to prepare optimally the season.“