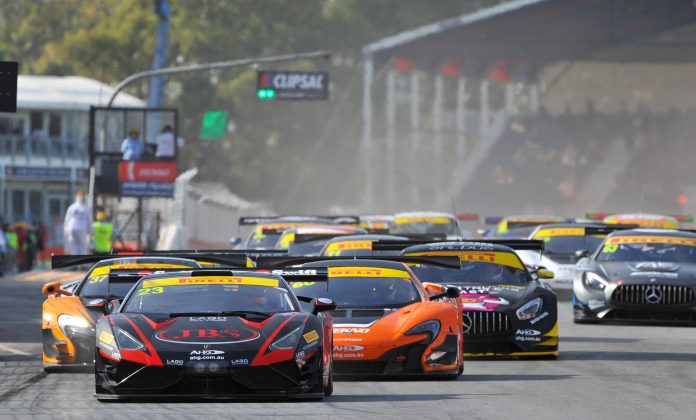 A 27-car field will take to the streets of Adelaide for the opening round of the 2017 CAMS Australian GT Championship next month (March 2-5), with a record number of current-spec GT3 machines.

It marks the tenth time the CAMS Australian GT Championship has visited the city of churches, with eight of the world’s leading automotive marques represented for the occasion.

The event will provide fans their first chance to see new teams, drivers and combinations on track with three races across the weekend, plus practice and two qualifying sessions on Thursday (March 2).

Part of McLaren’s 2016 Blancpain Endurance Series winning team, Ledogar made his Australian GT debut at Highlands at the end of 2016, making an immediate impact.

Despite his youth, van der Linde has already notched up a host of championship successes, including the ADAC GT Masters in 2015 – Germany’s equivalent of the CAMS Australian GT Championship.

They’ll go door-to-door with familiar names such as Craig Baird and Scott Taylor, who will share one of Scott Taylor Motorsport’s two Mercedes-AMG GT3s.

Max Twigg will pilot the team’s second entry, rekindling a relationship with Mercedes that began in 2015.

Former Bathurst 1000 winner Steve Richards will share the duties in the BMW Team SRM M6 GT3 with James Bergmuller, who will make his Australian GT debut in Adelaide.

Lamborghini will enjoy strong representation on track with a staggering eight entries.

Jim Manolios and Dean Canto will share the Trofeo Motorsport Lamborghini Huracan GT3 in what will be the iconic car’s first competitive outing around the Adelaide Parklands circuit.

The seven other entries, all Lamborghini R-EXs, see Tim Miles and youngster Jaxon Evans will compete in McElrea Racing entry, while the race winning duo of Roger Lago and David Russell will join forces once again.

Peter Major will make his Australian GT debut, the former Western Australian Formula Ford champ will look to tame his own raging bull while Justin McMillan and Glen Wood return in their own example of the Reiter Engineering built car.

Local racer Yasser Shahin will look to match the pace he showed on route to victory at Phillip Island last year as former Gold Star winner Tim Macrow climbs aboard a Lamborghini in the Invitational Trophy, sharing the car with Brenton Griguol, the duo having previously competed in a Ferrari F430.

Rounding out the Lamborghini stampede is Michael Hovey, who will take the wheel solo for the course of the weekend.

Ash Samadi and Marc Cini will take control of their own cars while James Koundouris will be joined by former Supercars racer Ash Walsh in the Supabarn Supermarkets entry.

With Emery and van der Linde in the lead car, Steve McLaughlan will pilot the second Jamec Pem entry.

McLaren will field two cars; the Ross/Ledogar entry and the McElrea Racing run Objective Racing 650S GT3 for Tony Walls, who has fond memories of Adelaide after claiming his maiden Australian GT victory there twelve months ago.

Two Aston Martins will also take to the 3.219-kilometre circuit, with Tony Quinn driving the Darrell Lea entry and Tony Bates at the wheel of the sole Miedecke Stone Motorsport car.

The rear-engined contingent is completed by Keith Wong, who will partner with 2016 Highlands race winner Michael Almond, and Michael O’Donnell who will compete for the Invitational Trophy.

The Clipsal 500 marks the start of the five round 2017 CAMS Australian GT Championship, with three races across the weekend.

Drivers and teams will be on track from Thursday morning (March 2), with practice and two qualifying sessions over the course of the day.

All sessions will be broadcast live on Fox Sports, with Network Ten set to broadcast a post-produced package following the event.