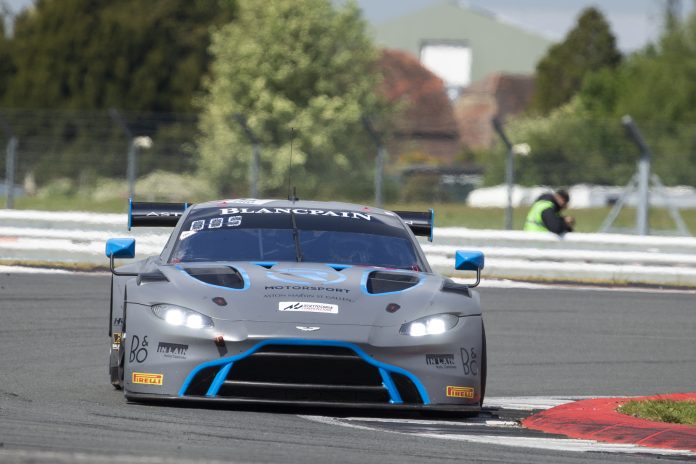 R-Motorsport out of luck as Silverstone hosts its round of the Blancpain GT Series. The outfit’s successful debut in the DTM and start in the Blancpain World Challenge Europe both took place only last week, but it was now time to contest the second round of the Endurance Cup. Despite showing strong pace on Sunday, the two Aston Martin Vantage V8 GT3s were unable to secure another top result.

In spring-like temperatures, many fans made the pilgrimage to the “Home of British Motor Racing” for the second race of the season. British comedy legend Rowan Atkinson was also among the hordes of fans who came along to the autograph session with the Aston Martin drivers. He is a well-known petrol-head and was in the garage of R-Motorsport as a guest to watch the team and its drivers as they went about their work.

The presence of ‘Mr. Bean’ did not bring the Aston Martin Vantage V8 GT3s prepared by R-Motorsport any luck, unfortunately. Car number 62 driven by Matthieu Vaxiviere, Matt Parry and Maxime Martin finished the race 17th overall in the field of 48 GT3 sports cars. The crew of the sister car, bearing start number 76, did not take the chequered flag.

The roller-coaster of a weekend for the team began early on in qualifying. In Q1, two red-flag periods forced Kirchhöfer and Vaxiviere to back off and abort their fast laps. In Q2, Parry and Dennis showed the Aston Martin Vantage V8 GT3’s potential with a top result, qualifying second and third respectively.

Thiim made the final qualifying session his own by posting the fastest lap of the entire weekend as he took the top spot. “We had an incredible session. Our qualifying pace was amazing,” said the Danish driver, who was the only one in the field to post a sub 1:59 minute lap.

Starting out from grid positions 29 and 35, the two R-Motorsport Aston Martin Vantage V8 GT3s faced a tough task in the three-hour race. Dennis and Martin both took the first stint and kept their cool during the chaotic initial lap when there was a big pile-up. Martin moved up no less than 13 places on the very first lap.

Further up front, British driver Dennis in car number 76 quickly shot up the field, heading for the Top Ten. “I had a really good scrap with Dennis Olsen in the Porsche and managed to stay ahead of him,” he said after handing his Aston Martin to Thiim in 14th position. The Danish driver set a cracking pace as he had done in qualifying and was in fifth place when he came in for the second driver change.

Martin took the wheel for the final stint after being asked at short notice to stand in for Kirchhöfer, who was unwell and declared unfit to race. In the final stages of the race, car number 76 was heading for the Top Five when an unfortunate incident ended the race for the three drivers. A piece of rubber kicked up from the track surface set off the GT3 car’s fire extinguisher, after which Martin was forced to retire. “We were doing really well. It’s a pity that we had to park up, as we making a superb charge,” said the Belgian in disappointment.

The crew’s last iron in the fire, car number 62, ultimately finished 17th overall. A safety car period at an inopportune moment shortly after the first change of drivers served to wreck the good work done at the start, dropping the Aston Martin way down the field. “We pitted a minute before the yellow flag period, losing a lot of places once again. Still, my team-mates, Matthieu and Matt, did a really good job with P17,” said Martin, who drove the first stint.

The next race in the Blancpain GT Series Endurance Cup will be held in Le Castellet from May 31st to June 1st. Both sets of three drivers in the R-Motorsport prepared Aston Martin Vantage V8 GT3s intend to fight back at the Circuit Paul Ricard, building upon their strong performances from Silverstone and achieving top results once again. “Our lap times were fast and our goal for Le Castellet is clear. We aim to make up for what happened at Silverstone,” said Matt Parry.

Dr. Florian Kamelger, R-Motorsport Team Principal: “This weekend at Silverstone, we clearly demonstrated the potential of our Aston Martin Vantage V8 but were sadly unable to transform this potential into a tangible result. Nicki Thiim drove the absolute fastest lap of the weekend in Q3 while Matt Parry and Jake Dennis delivered solid performances by driving the 2nd and 3rd quickest times respectively in Q2. Unfortunately, due to two poorly timed red flags in Q1, both Marvin Kirchhöfer and Matthieu Vaxiviere were thwarted in their attempts to qualify. The resulting disastrous impact this had on the average lap time for both cars meant that our crews had to start the race from 29th and 35th on the grid. Jake, Nicki, and Maxime fought their way up as high as 5th place, but sadly they went unrewarded for their efforts, as 30 minutes before the end of the race, car 76 was brought into the pits where it stayed for the rest of the race. The reason: The external fire extinguisher pin had been triggered by a piece of rubber kicked up by a car in front, which activated the fire system inside the car. This was a shame for Maxime Martin, who in addition to his opening stint in the #62, had stepped in for Marvin Kirchhöfer in the #76. Marvin was too unwell to race this morning after qualifying. Even though the race result is a disappointment for our hard working team, we’ll be heading to Paul Ricard with the knowledge that we have a car capable of victory with the new Aston Martin Vantage V8.”

Emil Frey Jaguar Racing to race for fifth time at the...

Podium-result at the 24h of Spa for Pierre Ehret with Rinaldi...