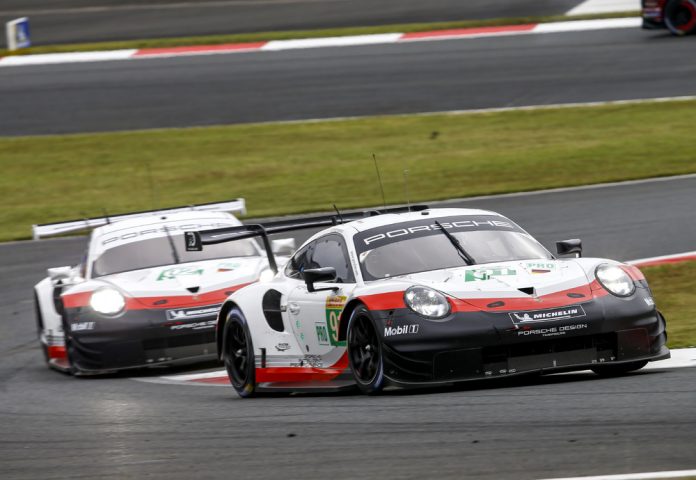 The Porsche GT Team tackles round five of the 2018/2019 FIA WEC Super Season with great confidence. At the six-hour race in Shanghai (China) on 18 November, the factory squad from Weissach aims to notch up another success with two ca. 510 hp 911 RSR. Thanks to a victory at the last race in Fuji (Japan) to conclude the first half of the season, Porsche has consolidated its lead in the GTE-Pro class of the World Sports Car Championship. Porsche is now eager to extend this advantage over the competition from Ferrari, BMW, Aston Martin and Ford at the last race of the 2018 year. Moreover, three customer teams fight for points towards the GTE-Am class with four additional Porsche 911 RSR.

The race
The Porsche GT Team has a score to settle at the Shanghai International Circuit. Last year, both 911 RSR were at times on course for victory. Richard Lietz (Austria) and Frédéric Makowiecki (France) lost around 15 seconds when they were shunted by an LMP1 prototype in the last third of the race and finished second. The sister car retired early. In the 2014 season, the Porsche GT Team celebrated a one-two result on the Formula 1 circuit in China. The following year, the Dane Michael Christensen and Lietz won. Shanghai has hosted the World Endurance Championship (WEC) every year since 2012. The Grand Prix circuit places high demands on the tyres and offers many overtaking opportunities.

The Porsche GT Team drivers
Sharing driving duties in the No. 91 Porsche 911 RSR are Lietz and Gianmaria Bruni (Italy). At the six WEC races contested in Shanghai, the Austrian has climbed the podium four times. Bruni is hoping to claim his first win on the diverse racetrack just outside the Chinese metropolis. Kévin Estre and Christensen share the cockpit of the No. 93 sister car. After their victory at the 24 Hours of Le Mans with Laurens Vanthoor (Belgium), the duo from France and Denmark went on to win the most recent race in Japan.

The Porsche 911 RSR
The Porsche 911 RSR celebrated its World Sports Car Championship (WEC) debut at Silverstone in 2017. So far this season, the racer from Weissach has clinched a one-two result in the GTE-Pro class at Le Mans and secured the GTE-Am category class win at the endurance classic in France as well as at the Silverstone race. The RSR with its four-litre boxer engine is based on the seventh generation of the iconic 911 sports car and produces around 510 hp depending on the restrictor. With a total of six vehicles, the Porsche brand is represented by the largest contingent of GT racers in the World Sports Car Championship.

The race on TV and Internet
The free-to-air station Sport1 will broadcast the race live from 6:00 to 8:00 hrs as well as the final phase (9:00 to 10:15 hrs). The entire race can be viewed free-of-charge via live streaming on sport1.de. The race is also aired in full length on the pay-TV channel Sport 1 Plus. Including the pre- and post-race coverage, the broadcasting runs from 3:30 to 10:30 hrs. The free-TV station Eurosport 1 televises the race from 6:30 to 8:30 hrs and from 9:30 to 10:15 hrs. Moreover, the entire race can be watched on the pay-TV channel Eurosport Player. Motorsport.TV also broadcasts the entire six-hour race live. For a fee, the FIA WEC app offers live streaming of the complete race as well as the time-keeping.

Pre-race quotes
Dr Frank-Steffen Walliser (Vice President Motorsport and GT Cars): “After winning the Fuji race we’re heading to Shanghai feeling highly motivated. But we have to assess the situation realistically. Our win in Japan wasn’t entirely our own doing, several things happened that played into our hands. With this in mind, the race in China certainly won’t be a foregone conclusion. We have to stay fully focused to avoid making any mistakes. If we manage to do this and make the most of our 911 RSR’s potential, we should be able to climb the podium at Shanghai – maybe even the top step.”

Pascal Zurlinden (Director GT Factory Motorsport): “The Formula 1 circuit in Shanghai is very demanding, especially on the tyres. This is partly due to the very long first right-hander. Our Porsche 911 RSR has to have a perfect setup for this turn. Our victories in Fuji and at Road Atlanta underlined that our car has very special qualities over the distance. In 2017 we performed very strongly in Shanghai, but we weren’t rewarded with a win. Now we want to rectify that.”

Richard Lietz (Porsche 911 RSR #91): “Our teammates in the sister car emphasised with their win at Fuji what our 911 RSR is capable of. Now we aim to do this as well. We will all work together to ensure that Porsche continues to extend its lead in the manufacturers’ championship. In China, we’ll definitely get good chances. I’m a big fan of Asia. After things didn’t work out quite so well for us in Japan, it should go better now in Shanghai, then our brief Asian tour can end on a positive note.”

Gianmaria Bruni (Porsche 911 RSR #91): “This is the last race of 2018 before the WEC Super Season continues in March next year at Sebring (USA). I always enjoy driving in Shanghai. The racetrack is one of world’s best. I’m pleased that I’ll compete alongside Richard for the first time in the Porsche 911 RSR on this special circuit. I’ve always had a lot of positive experiences in China, so I’m travelling there with a good feeling.”

Kévin Estre (Porsche 911 RSR #92): “I’m tackling this race weekend with fond memories. Last year we had an extremely fast car and were leading for three hours before we retired early, unfortunately. But the main impression is that we were very fast in Shanghai. I’m very much looking forward to the race, even though the circuit is really tricky. The tyres suffer a lot there. The durability of the rubber will be the key to success.”

Michael Christensen (Porsche 911 RSR #92): “Last year we held a clear lead in the race, but still didn’t manage to bring home victory. That needs to change this year. We’re flying to Shanghai feeling very optimistic. The season has gone really well for Porsche so far, our car was competitive everywhere. We once again saw at Fuji how well we work with the tyres and how strong we are with our strategies. That’s what we want to put into practice again in China. It’ll be a tough and close race, but we’re perfectly prepared for the task.”

Patrick Lindsey (Porsche 911 RSR #56): “With the exception of Sebring I don’t know any of the racetracks on the current WEC race calendar. So it’s important for me to familiarise myself with the tracks as quickly as possible. It worked really well in Fuji, because Jörg Bergmeister has a lot of experience and he helped me a lot. We now want to do this again in China. I’m also looking forward to experiencing something of the country’s culture. What a great life: getting to know new countries and to race the magnificent Porsche 911 RSR on the world’s greatest circuits – it doesn’t get much better than that.”

Julien Andlauer (Porsche 911 RSR #77): “The race in China will be very special. It’s the last race of this year. There’ll be three more races in 2019, but we’d all like to spend a relaxing Christmas at home. Still, to do this we need a good result. We’ll do our best in Shanghai. I don’t know this racetrack, so I’ll prepare for its quirks in the simulator. I’m looking forward to the new challenges and would like to earn more points towards the overall standings with my teammates.”

Matt Campbell (Porsche 911 RSR #77): “I wasn’t familiar with the Fuji circuit and I don’t know the Shanghai track either. I’ve looked at a lot of footage and I have to say that the layout looks pretty challenging. That’s what I like. We missed out on a good result in Japan. We now want to make up for that disappointment with a great race in China.”

Thomas Preining (Porsche 911 RSR #86): “I’m very excited for my first race in China. The trip to Japan was really interesting and a lot of fun. I now know that I really love long distance racing. It’s spectacular and always gripping. Sometimes the situation seems hopeless, then 15 minutes later you’re leading by ten seconds. Anything can happen. I’m expecting another emotional rollercoaster at Shanghai. I’ve never been to this racetrack but it looks incredible on television.”

Matteo Cairoli (Porsche 911 RSR #88): “The circuit in China is first class. The layout challenges you enormously as a driver. It’s extremely difficult to get a truly flawless lap there. Last year things didn’t go so well for us in China. It seems we made the wrong tyre choice. We’ll do things differently this year. I firmly believe that we have good chances for a great result. We’re clearly behind with our car in the overall standings, so there’s really only one motto for us: attack!”

Jonathan Adam ready to take on the world with Aston Martin...