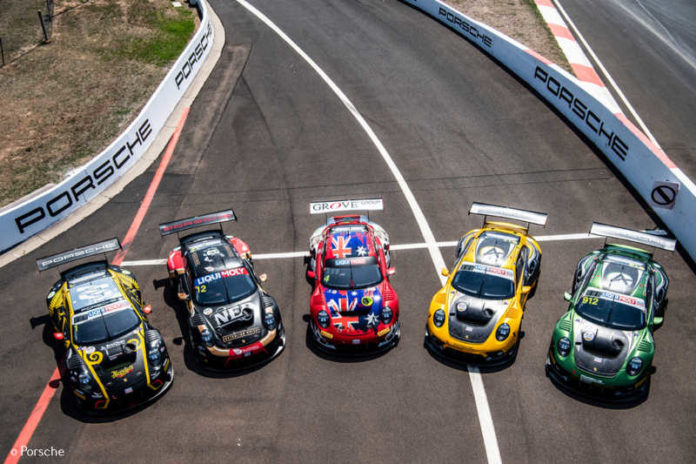 After managing Porsche Carrera Cup France for several years, Alex Gibot moved to Asia where he built Porsche Motorsport Asia Pacific (PMAP) from scratch, which has become a reference in the GT racing world, even outside of the region. The organisation managed by the Frenchman covers all bases, including support to Porsche’s GT3 teams.

“Porsche Carrera Cup Asia was launched in 2003 and this was the region’s only Porsche championship until 2017,” Gibot told Endurance-Info. “2019 was a great year and we were spoilt for choice with so many products: the new Porsche 935 and 911 GT2 RS Clubsport, as well as the latest generation Porsche 911 GT3 R and 718 Cayman GT4 Clubsport. These are four great models.”

Porsche Motorsport Asia Pacific was very active at the Bathurst 12 Hour with several Porsche 911 GT3 R cars: “The new 911 GT3 R allowed us to create and renew partnerships with competitive teams,” Gibot continued. “We were much more involved at Bathurst. Two years ago, we supported two cars and in 2020 we had five. The collaboration between us and the headquarters in Germany is very good. For example, at Bathurst Porsche sent two performance engineers, two support engineers, one strategist and a regulation coordinator, not to mention the support of Météo France.”

Gibot and his colleagues’ role is primarily to support customer teams: “Our job is to build race programmes and connect with our customers. We work in advance. In Bathurst, Suzuka and Macau, Porsche Motorsport Asia Pacific’s own container of spare parts was on-site. It’s a great challenge to develop relationships with customer teams.” By April, Porsche Motorsport Asia Pacific will have 11 employees.

In 2020, more Porsche cars should be present in GT World Challenge Asia powered by AWS, including new teams switching to the 911 GT3 R. One Porsche is also already confirmed in Super GT’s GT300 class with Hoppy Team Tsuchiya. Japan and Australia-based customers are looking at GT4 and GT2. KCMG will compete in the Nürburgring 24 Hours and Nürburgring Endurance Series: “KCMG will be there with two very solid cars,” Gibot added. “To be represented at the Nürburgring with an Asian customer is very positive.”

Were it not for the coronavirus outbreak, a Porsche Motorsport Asia Pacific-supported 911 GT3 R would have raced at Sepang in the Asian Le Mans Series. But, as in 2019, a GTE-Am entry at the 24 Hours of Le Mans remains a possibility.

Although the Asia-Pacific region is not convinced about the GT4 class, the number of Cayman entries are expected to increase in this year’s China GT season.

“We have the Sports Cup which acts as the first step on the Porsche motorsport ladder,” Gibot confirmed. “The event is organised with a festival spirit. The platform was launched in 2019 and we are due to have four dates in China with a mix of road and race cars. Also, Porsche Carrera Cup Asia will support three Formula 1 Grands Prix and next season will be receiving the new generation 911 GT3 Cup at the same time as the US, Germany, the Supercup and Carrera Cup France.”

15-year to compete at final round of Intl. GT Challenge Circuit...