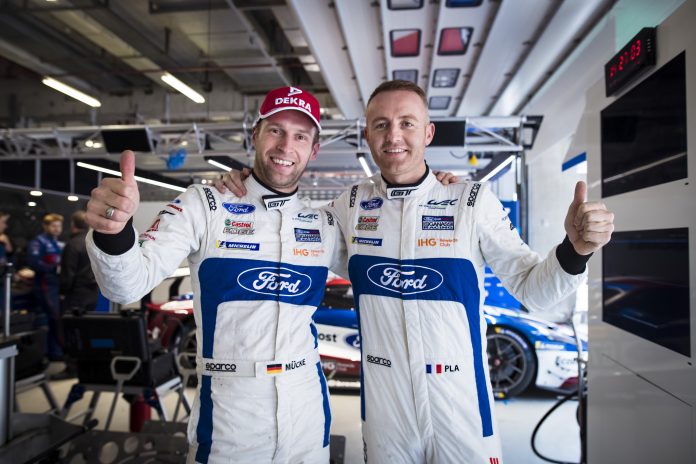 The #66 Ford GT of Stefan Mücke and Olivier Pla took a commanding pole position in today’s qualifying session for the ‘6 Hours of Shanghai’. The sister Ford GT of Andy Priaulx and Harry Tincknell was delayed at the start of the session by a fuel pressure issue, which meant that Priaulx took to the track a few minutes into the 20-minute session.

Mücke was the first man out and quickly set the pace before handing the car over to Pla. A top time from the Frenchman moved the #66 GT higher up the order before Mücke jumped back in and put in a stunning lap that took pole position. Currently sitting in second place in the GTE Drivers’ World Championship, the duo also earn an extra championship point for their efforts today.

“That was an excellent performance by everyone,” said team principal George Howard-Chappell. “Stefan and Olivier are ‘on fire’ here in Shanghai. It was an excellent strategy by the team who used the qualifying session to the maximum. It’s great to get pole and the extra championship point. It was a shame about the minor technical issue for the other car or I’m sure they would have been right up there too.”

“We saw that the car was improving quickly with each lap as the track rubbered in so we made the decision to use one more set of tyres at the end and do that third run,” Mücke said. “Oli’s lap was amazing so we decided to have one more go and we got pole! I couldn’t believe it when I saw the lap time. The team did a brilliant job and gave me the tyres in the perfect temperature window and a beautifully-balanced car so we’re very happy with this big team effort.”

“I’m very happy with that!” said Pla. “During the final practice session this morning we nailed the balance of the car, which gave me the confidence to push hard in qualifying. I managed to set a good time on my first flying lap so we had time left for Stefan to head out for another go. It’s great to get that extra point for the championship as we need every point we can get after a couple of difficult races. We want to leave Shanghai with maximum points so that is our target for tomorrow.”

Despite not having time for the magical third run, Priaulx and Tincknell are fired up for a good race tomorrow. A race they have won for the last two years.

“I’m actually really happy with my lap,” Priaulx said. “It put us nicely in the middle of the grid, then Harry did a good job to keep us there. Starting late meant that we didn’t get a third go at it but we’re ready for tomorrow. We are expecting it to be wet so the race is on; our weekend starts now!”