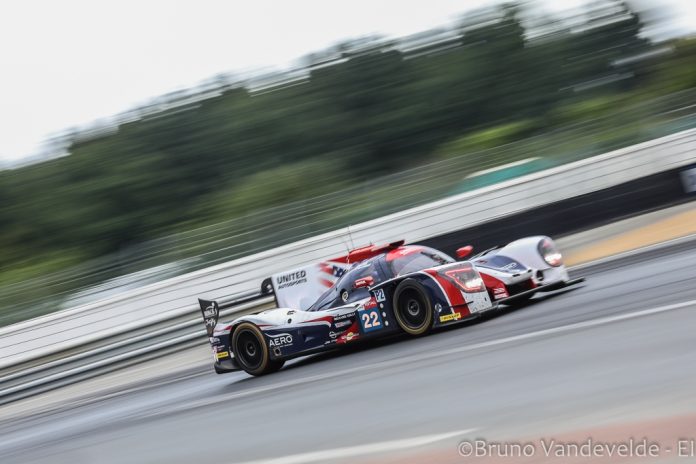 Despite the Ligier JS P217s having clearly shown that they were back in the running for the podium during this 86th edition of the 24 Hours of Le Mans, various incidents hindered the teams’ plans. The Ligier JS P217 has to content itself with a place in the top 5 of the LM P2 class thanks to the #32 United Autosports’ ascent through the field. In the top 3 of the LM P2 class for nearly two-third of the race, the #23 Panis Barthez Compétition car ended up finishing in 11th place due to a mechanical issue.

After a very successful Test Day and practice sessions, the Ligier JS P217 displayed a rhythm during the race that allowed it to compete amongst the best in the LM P2 class. The #23 Panis Barthez Compétition Ligier JS P217 solidly occupied 2nd place after 19 hours of racing, and the #22 United Autosports Ligier JS P217 was running in 5th place. In the space of a few minutes, the efforts of both teams were reduced to nothing.

After a great race from the three drivers and team of Panis Barthez Compétition, the #23 Ligier JS P217 had to return to their garage, and only re-emerged 1hr15 later. The team managed to change the clutch as fast as they could; however, the incident prevented them from staying in the fight for the podium. They crossed the finish line in 11th place in the category.

Despite running at a great pace to regain precious seconds, the #22 United Autosports Ligier JS P217 went off track hard at Karting. The driver thankfully came out unharmed. The Anglo-American team’s second car also had an eventful race, namely with an incident in the evening which required the team to replace the car’s nose. Having climbed back up into 4th place in LM P2 and fighting for a podium finish, the #32 was slowed down by a puncture one hour from the finish. They crossed the line in 5th place.

Earlier in the race, around 4.30am, a first disappointment came from the #34 Jackie Chan DC Racing Ligier JS P217, which had been running in sixth place. Victim of a broken engine, they were forced to retire. The sister car, the #33, being driven by a crew of young gentlemen drivers, completed the 24 hours of the race with a very nice 10th place in the category.

At the end of the morning, after an eventful and well run race, Algarve Pro Racing announced that the adventure was over for the #25 Ligier JS P217 because of a gear box issue.

Having had a regular and trouble-free race with the #44 Ligier JS P217, Eurasia Motorsport was also forced to retire due to gear box issues just a few minutes from the end.

Larbre Compétition were competing in the 24 Hours of Le Mans for the 25th time this weekend, their second time in the LM P2 category. The team achieved a good race that allowed them to gain experience in the category before continuing their season in the World Endurance Championship. By making the finish, the team fulfilled the goals that they had set with their drivers, of which two were discovering the event for the first time.

Jacques Nicolet, President of Onroak Automotive: “For Onroak Automotive, this 86th edition of the 24 Hours of Le Mans, maybe more than any other, mistreated us. The weekend had got off to a good start with a 1-2 victory of the Ligier JS P3 in the first Road to Le Mans race and a second place in the second event. In LM P2, although the JS P217 returned into the fight for the win, and it had shown a strong performance, the teams missed out on success and even suffered from bad luck. The strong point of the race was the great performance of the #23 Panis Barthez Compétition Ligier JS P217 which occupied 2nd place in the LM P2 class up until the 20th hour of the race, but they were unfortunately not recompensed. The performances demonstrated by the new aerodynamic kit show that the Ligier JS P217 is able to fight for the victory in LM P2 at the 24 Hours of Le Mans.”