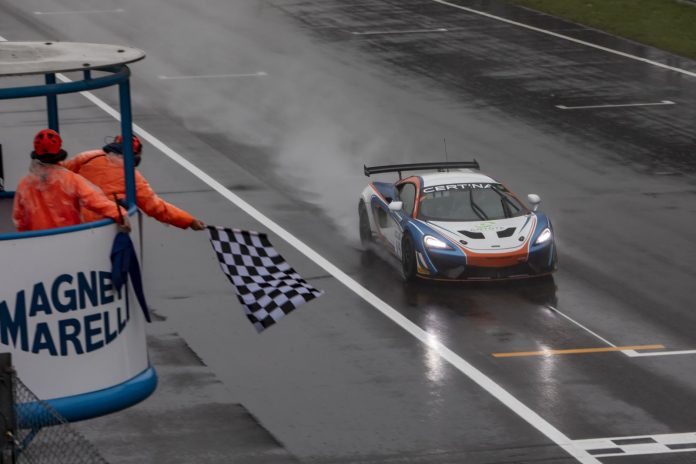 Daniel McKay and Benjamin Lessennes claimed their second win of the GT4 European Series weekend on Sunday afternoon, completing a perfect weekend for Equipe Verschuur. McKay and Lessennes secured the McLaren 570S GT4’s second win of the weekend in a rain-hit second race on the Autodromo Nazionale di Monza. Leipert Motorsport and Selleslagh Racing Team claimed class victories in Pro-Am and Am.

Tricky conditions meant the decision was taken to complete the first three laps behind the safety car. When the safety car pulled in Olivier Hart in the #69 V8 Racing Chevrolet Camaro GT4.R led the field into turn 1, but soon after both Benjamin Lessennes in the #14 Equipe Verschuur McLaren 570S GT4 and Bas Schouten in the #31 Selleslagh Racing Team Mercedes AMG GT4 passed Hart.

Within a few laps Lessennes had pulled out a reasonable gap over the Dutchman and even a brief safety car procedure couldn’t stop the young Belgian driver from leading the race. Behind the first two cars, Simon Knap and Olivier Hart fought hard for third place until the pit window opened.

Lessennes only handed over the lead to Schouten when he came into the pits for the mandatory driver change at the end of lap 11. The Dutchman stayed out a bit longer and his Selleslagh Racing Team teammate Junior Strous rejoined ahead of Daniel McKay in the Equipe Verschuur McLaren.

Strous, however, was unable to keep McKay and his McLaren behind him and on lap 14 the Equipe Verschuur team was back in the lead of the race. By the end of the lap McKay was already two seconds clear of Strous.

Nicolaj Møller-Madsen gained a position shortly after the restart when he passed Duncan Huisman and moved up into third overall. Huisman’s day got even worse when he spun the Chevrolet Camaro GT4.R into the first chicane. The Dutchman dropped out of the top eight as a result.

In the final minutes McKay made no mistakes and after 24 laps the Equipe Verschuur McLaren crossed the line to take its second win of the weekend. Selleslagh Racing Team’s Junior Strous finished in second place at 9.142s, while Nicolaj Møller-Madsen secured the first podium finish of the season for Phoenix Racing, 1.529s behind the Mercedes driver.

In Pro-Am the race was decided with just three minutes left on the clock. RN Vision STS driver Gabriele Piana had been reeling in the #2 Leipert Motorsport Mercedes AMG GT4 of Marcus Paverud, but just after he had taken the lead the Italian made a mistake.

Piana hit the curbstone and his #111 BMW M4 GT4 veered across the track. After a trip through the gravel trap, Piana rejoined behind Paverud. Despite his best efforts to close the gap, Piana was unable to catch the Norwegian. Paverud crossed the line in fifth overall, followed home by Piana at 1.951s. Dominik Schraml claimed third place in the #777 Schwede Motorsport Mercedes AMG GT4.

Johan Vannerum and Jean-Luc Behets claimed their second win in the Am class, finishing 22nd overall. They were joined on the podium by Street Art Racing drivers Clement Seyler and Pascal Bachmann, who finished in second place, and Las Moras by Equipe Verschuur drivers Luc and Liesette Braams.

The next race of the GT4 European Series will take place at the Brands Hatch Grand Prix circuit in the United Kingdom on May 4-5, 2019.

Daniel McKay, #14 Equipe Verschuur McLaren 570S GT4: “I don’t think we could have asked for much more. I’ve got to thank Ben today. Ben helped me so much on Thursday in the wet. I was struggling a bit and he showed me the way. He’s unbelievable.”

Benjamin Lessennes, #14 Equipe Verschuur McLaren 570S GT4: “I think we’ve done a really great job today. These were for sure the 30 longest minutes of my life. It was really intense. Daniel did an awesome job to keep the pace. A perfect weekend to start!”

Luci Trefz, #2 Leipert Motorsport Mercedes AMG GT4: “It was a great feeling. I had a really great start. After that I had a small contact in the pitlane, but that was not too bad. I’m really happy with the position, Markus did a great job and I’m looking forward to the next race.”

Marcus Paverud, #2 Leipert Motorsport Mercedes AMG GT4: “I’m really happy with first position in our class and fifth overall. Luci did a great job at the start of the race. He managed it perfectly and kept the car going the whole stint. I had a fight with Gabi. I think I managed to stress him a little, he made a mistake and went off, but he got back fast again, so I’m happy we managed to get first place.”

Johan Vannerum, #32 Selleslagh Racing Team Mercedes AMG GT4: “Jean-Luc had a great start and was able to pull away from our rivals immediately. The safety car brought everyone back together, but between the safety car and the pit stop he created enough space. I could get in and increase our lead. The last five laps I didn’t take any risks and drove to victory.”

Jean-Luc Behets, #32 Selleslagh Racing Team Mercedes AMG GT4: “Another new experience here with the wet conditions. The conditions on the straights were very tricky, the visibility was nearly nothing, but I think we had the right car balance and could fully concentrate on driving. We did a great job, finished 16th overall. A perfect weekend for us.”