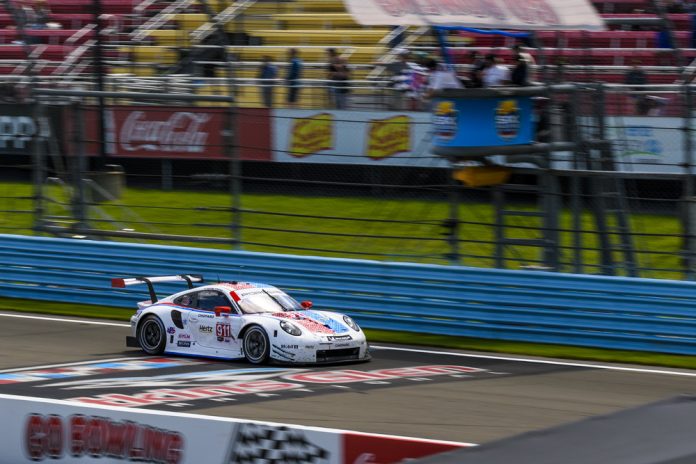 The Porsche GT Team has claimed its fourth straight win from five races contested so far in this year’s IMSA WeatherTech SportsCar Championship. Sharing the cockpit of the No. 911 Porsche 911 RSR, Patrick Pilet (France) and Nick Tandy (Great Britain) triumphed at the hotly-contested six-hour race at Watkins Glen (USA). Their works driver colleagues Earl Bamber (New Zealand) and Laurens Vanthoor (Belgium) achieved sixth place in the identical, ca. 510 hp race car with the starting number 912. With this result, Porsche has extended its lead even more in the manufacturers’ classification and the factory squad has also taken over the top spot in the IMSA Michelin Endurance Challenge in the USA. In the drivers’ classification, Pilet/Tandy now rank first ahead of Bamber/Vanthoor.

The success at the storied racetrack in the US state of New York was thanks to perfect teamwork, well-executed strategies and flawless performances from the works drivers. After starting from the fourth grid row of the high-class GTLM field, the two Porsche 911 RSR systematically worked their way up the ranks during the first half of the race. A pit stop at half time was a prime example of how the mechanics contributed to the victory. Compared to the Corvette, which had led up until that time, the pit crew completed their work 2.6-seconds faster and thus snatched the lead. In the last 30 minutes of the race, Earl Bamber initially held the top spot ahead of his works driver colleague Nick Tandy, but due to a different pit stop rhythm, the New Zealander had to make a splash-and-dash pit stop just before the flag, which relegated him back to sixth place.

In the overall classification, Porsche has further extended its lead in the manufacturers’ classification by 18 points thanks to the win in Watkins Glen. In the team and drivers’ classification, the crews of the number 911 and 912 cars occupy the first two places. In the IMSA Michelin Endurance Cup, which consists of the long distance races at Daytona, Sebring, Watkins Glen and Road Atlanta, the Porsche GT Team is now the sole leader.

In the GTD class, the customer team Pfaff Motorsports scored sixth place. Porsche development driver Lars Kern (Germany) as well as the two Canadians Scott Hargrove and Zacharie Robichon launched an impressive charge through the field in the No. 9 Porsche 911 GT3 R. At the beginning of the race, a puncture and a drive-through penalty threw the team back to last place at times. The team made full use of the strengths of the 500+ hp GT3 vehicle from Weissach. Works driver Dirk Werner (Germany) and his teammates Marc Miller (USA) and Marco Seefried (Germany) brought home tenth place in the identical model fielded by Black Swan Racing. The Porsche 911 GT3 R campaigned by Park Place Motorsports, in which works driver Patrick Long (USA) shared driving duties with his compatriots Patrick Lindsey and Nicholas Boulle, retired early.

Round six of this year’s IMSA WeatherTech SportsCar Championship is contested this coming weekend (7 July) at the Canadian Tyre Motorsport Park in Bowmanville (Canada).

Comments on the race
Pascal Zurlinden (Director GT Factory Motorsport): “We’ve won four out of the five races so far this season. We’re leading all classifications and we’re now alone at the top of the Endurance Cup. It’s been a wonderful season so far. I feel for the No. 912 car. The yellow flag simply came out at the wrong time. In the drivers’ championship, both crews occupy the first two positions, so we now have two irons in the fire. The racetracks at the upcoming events over the next few weeks should suit our 911 RSR.”

Steffen Höllwarth (Programme Manager IMSA SportsCar Championship): “First and foremost, I’d like to thank the whole team. The work over the last weeks at the IMSA series races, the successful Le Mans outing and today’s long-distance race at Watkins Glen have been really tough. Victory is the just rewards for the entire crew. Our drivers didn’t have the fastest car in the field, but through consistent and completely flawless drives, we’ve now come out on top. That was a real textbook example of teamwork.”

Patrick Pilet (Porsche 911 RSR #911): “The fact that we won this race is simply incredible. Our car wasn’t running perfectly on Friday, and we experienced some problems in the warm-up before the race. Even on the grid, our engineers did everything they could to fix the car for the race. They did a sensational job. Precisely this work, even during the pit stops and in making the right strategic decisions, was the key to victory. Plus, we drivers didn’t make any mistakes.”

Nick Tandy (Porsche 911 RSR #911): “We certainly didn’t have the fastest car today, but perfect teamwork secured the victory for us. The pit stops were perfect, the strategies were simply good, and with absolutely consistent and immaculate driving, the drivers brought our Porsche 911 RSR to the finish line. Not everything went smoothly at the beginning of the race weekend, but when it came to the crunch we were 100% there. This is a fantastic and very valuable win for me.”

Laurens Vanthoor (Porsche 911 RSR #912): “For me personally I’m disappointed, but for the Porsche GT Team I’m thrilled. We could have won this race, but in this case we lacked that necessary bit of luck. We’re still well on course in the championship – that’s the most important thing. Now we’re off to Mosport.”

Earl Bamber (Porsche 911 RSR #912): “We simply hit a bit of bad luck with the yellow flag today. Okay, the car wasn’t the fastest in our class, but we made up for that with consistency and good teamwork. All in all, it was a successful day for Porsche. I’m looking forward to the upcoming races. It’s one great racetrack after the other for us drivers now.”