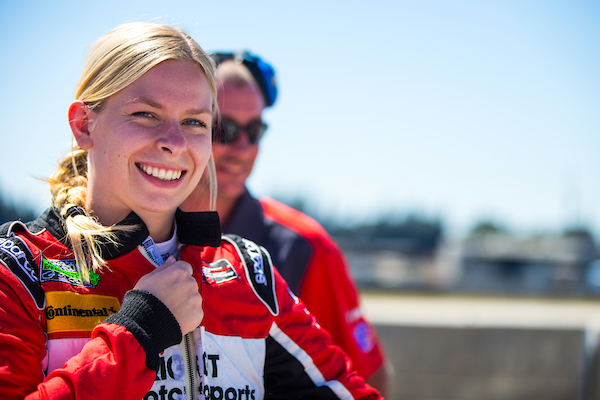 From May 4 to 6, Wright Motorsports driver Christina Nielsen will compete for additional Championship points at the team’s home track, the Mid-Ohio Sports Car Course. She and co-driver Patrick Long will race the No. 58 Porsche Consulting/Porsche Digital Porsche 911 GT3 R in the two-hour, 40-minute event in hopes of a podium finish on home turf. Wright Racing aims to further increase its GTD-class points in the IMSA WeatherTech Sportscar Championship, in which Nielsen is defending her two consecutive titles.

In 2015, Nielsen’s first race at Mid-Ohio, she competed in the Pirelli World Challenge (PWC) sportscar series and earned the coveted Hard Charger award for her skill in overtaking on the technically challenging road course. Now, she’ll have the opportunity to shine once again — this time, with Porsche pro Long and the Wright Motorsports Porsche 911 GT3 R.

“It’s going to be cool going back to Mid-Ohio, a track I haven’t raced on since my first time there in 2015,” Nielsen said. “Last year, Wright earned a couple of podium finishes in the PWC series at Mid-Ohio, so they truly know how to make a Porsche go quickly around there. I am confident I’m in good hands.”

Though Nielsen’s most recent race was at Sebring in mid-March, she’s got a full schedule lined up for May. “It’s been quite a break without some driving, so I look forward to getting behind the wheel,” she continued. “We have some busy times coming up. Right after the race, I fly out to Italy, where I’ll have my first run in the car I’ll race at the 24 Hours of Le Mans — Ebimotors’ Porsche 911 RSR. I’m really looking forward to this cool week of racing I have coming up!”

On Top of the Points, Christina Nielsen and Scuderia Corsa to...