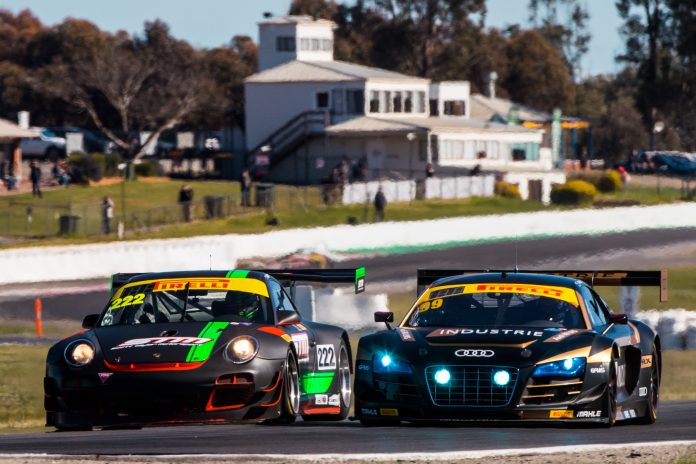 The Industrie Audi driver topped both qualifying sessions to start Race 1 from pole, shadowing Scott Taylor to the flag to move within touching distance of his maiden series win.

For Kelly, it proved enough as he was confirmed the 2018 title winner with a 2018 tally of six race wins and a clean sweep at the opening round at Albert Park.

“I just couldn’t be happier to have got it, particularly after the disaster at Eastern Creek a few weeks ago.

“I don’t want to use the phrase ‘that’s motorsport’, but I’m gonna!

“That’s the way it goes. We had a good run and it was about self-control after that.

“Calmness and a bit of application prevails when you’ve got such a good team behind you – all I had to do was drive it!”

Taylor held off Kelly in the opening race of the weekend, the STM Porsche 911 GT3 R moving into the lead at Turn 3 on the opening lap.

Stevens dropped the third after a moment with Taylor as they battled over the lead, allowing Kelly to slip past the Ferrari and mount a challenge on Taylor.

A masterful defensive drive ensured Taylor, the Australian GT Championship regular but debutant in the Trophy Series, maintained the advantage to take victory.

A blistering start from Stevens in Race 2 saw the Ferrari driver move around the outside of Kelly at the opening corner, before settling into Taylor’s wheel tracks.

His clutch issue fixed, Stoupas scythed his way through the field to control the race prior to the pitstops, his impressive pace seeing the Victorian race his way back into the lead following a thrilling battle with Stevens once he’d taken service.

Kelly found himself fifth at the flag having fallen behind Rio Nugara following his stop, the EAT Furniture Audi R8 LMS Ultra GT3 driver setting a blistering lap of 1:21.237 to claim the race’s fastest lap.

Two consistent performances from Chris and Luke Seidler saw the father and son duo bring their Seidler Group Porsche GT3 Cup Car home in sixth in both races, ensuring they rounded out the season with a solid six place finish in the title standings.