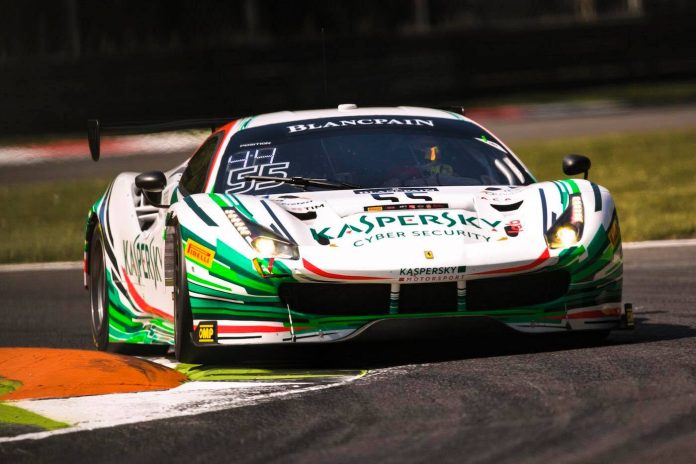 Italy’s historic Monza circuit today hosted the first round of the Blancpain GT Series – Endurance Cup, the first of five exhilarating races in this year’s championship and the season’s first real endurance test for the Kaspersky Motorsport team.

At the end of three exciting hours of racing, Giancarlo Fisichella steered the #55 Kaspersky Motorsport Ferrari 488 GT3 passed the chequered flag to claim fourth place and bring home a useful points haul in the Endurance Championship.

One of Fisico’s two team-mates, the vastly experienced fellow Italian Marco Cioci analysed the good and bad points of the new team line-up’s first outing of the year. “It was a very, very tough race” admitted Marco. “Even after qualifying, we were still working on the car to find the best possible set-up for the race. Then, immediately after the start, it was Armageddon on track! There was a huge opening lap incident involving a multiple car pile-up, leaving seven GT cars parked on the start-finish straight, which needed the Safety Car, before the race was red flagged and then re-started after about 15 minutes.

Marco added, “Fortunately, we escaped unharmed and then settled into our race. We struggled in the race a bit to overtake, as we tended to lose aero downforce when we were close behind other cars. However, we used all of our great race experience as well as plenty of good information from the pits, and from our race engineer, to work with some data supplied by Kaspersky Labs as to how to manage the car as well as possible, from this we were able to move up the order. Consistency was our goal today rather than the outright performance, in Round 1 of the season in the new Ferrari 488 GT3. Also, thanks to data from the pit-wall and our efforts in the cockpit, we had a good afternoon and can be pleased with this result. We will bring some updates for the next round.”

The Blancpain GT Series has established itself as the leading championship for GT cars and this year it looks like being ultra-competitive: to give you an idea, at the end of the final part of qualifying, held earlier the same day, no fewer than 32 cars had all set a qualifying lap time within the same second!

In the end, it was James Calado who posted the best time out of the teams trio to secure 16th spot on the grid – not an ideal starting position for Race Day, but remember this was Kaspersky Motorsport’s first outing with the new AF Corse-prepared Ferrari 488 GT3 in the PRO class. “A positive way to start the first race weekend of the season here at Monza,” said James, who when he is not racing for us is an official Ferrari driver in the World Endurance Championship this year. “We have shown very good team spirit, which is very important, one team all working well together. I really enjoyed it especially as the car is competitive, which makes things easier. The pressure is high but I enjoyed every single lap. I’d like to thank the team for the whole weekend and Kaspersky Lab, we can all be very happy!”

Once the race got underway for a second time, our experienced crew concentrated on consistent lap times, taking advice from the pit wall and choosing the optimum time to make the driver switches. There were no mistakes from a driver line-up of this calibre and in the end, Giancarlo Fisichella, who drove the final stint, came very close to revisiting the Monza podium he had stood on when he finished third in the 2005 Italian Formula 1 Grand Prix. “Today has been challenging,” he said. “We had a few issues, but the good thing is that they were small ones. As you saw today, drivers may take real risks on the track, but the virtual world of telemetry looks set to be a key factor in the sport for some time to come and we have collected important long-run data today, which all of us will benefit from. However, there is still work to do to get the car optimised and we will be working hard analysing the data to allow us to make a step forward. Now we can start preparing for Round 2 in Silverstone, but pleased with the way the opening weekend has gone.”

Starting from 16th on the grid certainly made life a bit harder than it could have been, but having fought their way up to fourth at the flag, Marco Cioci saw plenty of positives in this first race weekend. “It wasn’t the perfect start today but it ended well,” he maintained. “Getting into P4 was difficult, as it was all very tight, but in the end it all came together and I’m definitely satisfied with our result. It’s amazing to finally get our first points together as a car crew. We did a great job individually and as team! I think this will become a very interesting fight throughout the whole year. We seem to have strong performance and the car feels nicely balanced, but we can improve.”

From fourth, a podium doesn’t seem too far away. Can the Kaspersky Motorsport trio get there in the next round? Be sure to follow events at Silverstone, in the UK, where the next race takes place over the weekend of 13th – 14th May.