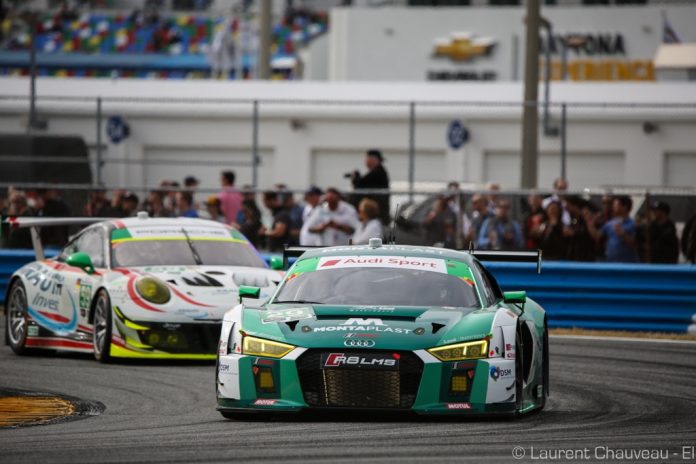 While leading the GTD class in the Rolex 24 at Daytona last weekend at Daytona International Speedway, the MONTAPLAST by Land-Motorsport Audi R8 LMS was given a five minute stop and go penalty by the sanctioning body for a Balance of Performance (BoP) infringement.

The International Motor Sports Association (IMSA) cited “consistent and beneficial” advantage in refueling times compared to the GTD class average, an average goal that was not communicated to the teams beforehand.

Between the 2017 IMSA WeatherTech Championship season finale at Motul Petit Le Mans and the 2018 season opener at the Rolex 24 At Daytona, the team implemented changes to the contents inside the Audi’s fuel cell, an area which is not currently homologated or specifically regulated in the IMSA rulebook. These changes allowed the fuel to flow into the cell at a faster rate, shortening the time the team spent in pit lane during pit stops, resulting in the stop and hold penalty.

Following the conclusion of the event, the Montaplast by Land Motorsports Audi R8 LMS spent three hours impounded at technical inspection, where officials scrutinized the fueling equipment, and dismantled and inspected the fuel cell, which was deemed to be fully within the series regulations. The refueling rigs and fuel flow restrictors, which are regulated by BoP were in complete compliance with the IMSA rulebook before and after the race.

Separate but not unrelated, there was a discrepancy between the fuel numbers the series was reading, compared to the readings the team obtained from external measurement of the rig. The team’s measurements were verified by engine management software, which showed the fuel used in every stint. While the discrepancy of these numbers were not a direct cause of the penalty, the numbers were still a variable of the calculations used to assess the penalty.

In regards to the penalty, the IMSA Rulebook currently states:

2.1. The Technical Regulations are the basis for the technical specifications for the WeatherTech Championship. In order to maintain competitive equivalency between Cars within each class and between classes, IMSA may, at its discretion, utilize an adjustment method during each season (BoP). For LM P2 Cars (within the P class), the GTLM and the GTD classes, which have references to Balance of Performance (BoP) in the FIA regulations, where there is any conflict, Attachment 2 supersedes all FIA specifications.

2.7. Competitors, Constructors and Manufacturers are expected to provide valid data upon request to assist IMSA in the BoP process. Any Competitor, Constructor or Manufacturer who deliberately gives false information, attempts to influence the BoP process, manipulates the performance, or displays a level of performance above or below the expected result in any Session may be penalized to the full extent listed in Art. 57.

Since there was no manipulation of the performance, which would have resulted in disqualification, IMSA’s stop and hold penalty was awarded for the No. 29 Audi displaying a level of performance above the expected result in terms of how quickly their car took on fuel.  IMSA has stated that moving forward, they will amend the rules to give teams a specific number that will be help define “the expected result” for fueling times. All BoP penalties issued by IMSA are not subject to appeal.