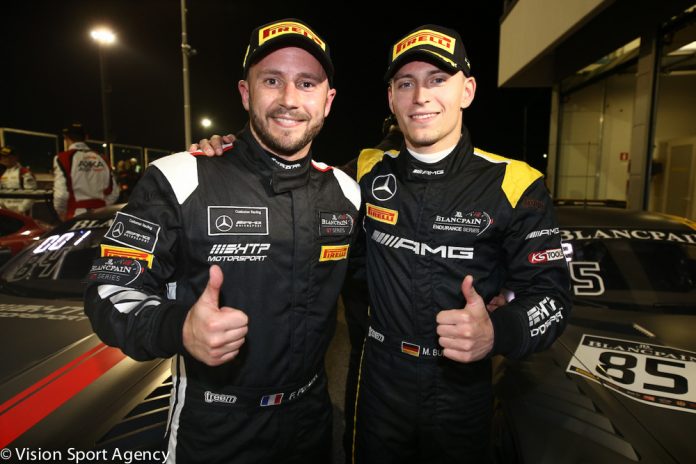 After a frenetic start to the first qualifying race of the season, Maxi Buhk and Franck Perera (#84 HTP Motorsport Mercedes-AMG) were crowned the winners. They will start from pole in tomorrow’s main race. Second, and winners of the Silver Cup, were Jules Szymkowiak and Fabian Schiller, also at the wheel of an HTP Motorsport machine. Raffaele Marciello and Michael Meadows completed a Mercedes-AMG 1-2-3, driving the #90 AKKA ASP car. The win in Pro-Am went to reigning champion Michael Broniszewski, sharing the #11 Kessel Racing Ferrari with Giacomo Piccini.

The Misano Qualifying Race, run in the dark, has always had its fair share of incidents, but this time the opening lap proved to be very tumultuous. When the #2 Audi of Will Stevens was spun round, it caused a multi-car pile-up. The race was stopped and six cars were not able to restart.

Once the race got going again, polesitter Marco Mapelli immediately entered the pitlane, after a fuel pressure problem slowed down his #66 Attempto Racing Lamborghini. That left reigning Blancpain GT Series champion Maxi Buhk in front, being chased by his team-mate and fellow champion Dominik Baumann. When the Austrian made contact with the #90 Akka ASP Mercedes-AMG of Blancpain GT Series newcomer Raffaele Marciello, Baumann dropped to 20th position, leaving the #63 Grasser Racing Team Lamborghini of Mirko Bortolotti in second position.

The mandatory pitstops were to change that order thoroughly, with Fabian Schiller claiming second in the #85 HTP Motorsport Mercedes-AMG. His co-driver Jules Szymkowiak had started from tenth, but managed to climb up to fifth before the pitstop. The #90 AKKA ASP machine, now in the hands of Michael Meadows, was still in third.

Those positions remained unchanged for the second half of the race, producing a Mercedes-AMG 1-2-3. Schiller and Szymkowiak, aged 19 and 21 respectively, added the Silver Cup win to their tally.

The battle for the remaining points positions produced a hectic finish to the race. Eventually Vincent Abril (#7 Bentley Team M-Sport Continental) took advantage of a mistake from Christian Engelhart (#63 Lamborghini) and Andrew Watson (#59 McLaren) to claim fourth, with Felix Serralles (#88 Mercedes-AMG) scoring points in his first-ever Blancpain GT Series race. Reigning champion Enzo Ide crossed the line in sixth, after his co-driver Chris Mies had started the race from 18th position on the grid.

Franck Perera (#84 HTP Motorsport Mercedes-AMG): “Maxi did a great first stint and gave me a comfortable advantage for the second half. After a good pitstop I could control the race, even though I had some scary moments when lapping backmarkers. This is a fantastic start for my collaboration with Mercedes-AMG, we will try to repeat this tomorrow.”

Fabian Schiller (#85 HTP Motorsport Mercedes-AMG): “I must admit that I was a bit nervous when I left the pitlane, this being my very first race in the Blancpain GT Series. But thanks to great driving by Jules and a fantastic pitstop, I had a bit of a lead and was able to quickly settle into a competitive rhythm. This podium finish makes me very happy.”

Raffaele Marciello (#90 Akka ASP Mercedes-AMG): “A GT3 car is still a car with four wheels, so not that different from a single-seater. It’s heavier and has less downforce, but you can still race hard with it. Regarding the contact with the other Mercedes-AMG: I do not think I made a mistake. I was on the inside line and the door was closed. Contact was unavoidable.”

Giacomo Piccini (#11 Kessel Racing Ferrari): “The weekend started badly when I wrecked the car during free practice, but the boys at Kessel did a perfect job in repairing the car. I really have to thank them for that. In the race I was fortunate to be able to avoid the big crash at the beginning, for I was just behind the car that spun. Michael completed the job perfectly and I hope we can repeat this in the main race.”