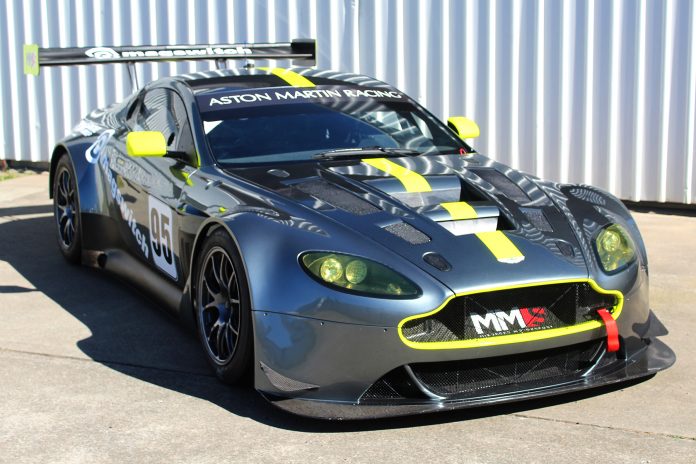 In 2016, the experienced pair recorded an emphatic victory in the Australian Endurance Championship event at Sydney Motorsport Park, with George setting a new record lap for a GT3 car around the circuit.

While Andrew has enjoyed a handful of cameo appearances alongside Jeremy Gray in a GT4 Aston Martin this year, George has taken a sabbatical from Australian GT since 2016.

The team has been contesting occasional state-level events to keep their eyes in, and continuing the work of Miedecke Motorsport which provides support for Aston Martin Racing clients in Australia.

During this weekend’s penultimate round of the Australian GT Championship season the pair will return with an all new Vantage chassis, one of the last V12 examples to be built by Prodrive in the UK.

“Chassis 019 which was campaigned in Asia by Craft Bamboo Racing was the car we had at Bathurst last year, the sister car to the car which won the GT Asia Series title in 2016,” George explained.

“Unfortunately we had an issue with carbon monoxide entering the cabin and the resulting crash saw the chassis take a hit.

“It’s not irreparable, but we took the decision to go down the road of a new car, which is the one we are debuting this weekend.”

The Miedecke team spent time in the new year building up the new Vantage chassis, debuting it in the NSW Production Sports Championship where it has proven the pace-setter in the category.

It leaves George optimistic of the car’s potential heading into Sydney Motorsport Park this weekend.

“Since the crash at Bathurst the following year (2017) and with business commitments at home, we had to curtail our plans until we had taken stock of our programme,” George explained.

“We’ve done that and have always targeted Sydney as the perfect return to the championship for us.

“The car was hooked up in 2016, and track conditions on a Supercar weekend are always better,” he added.

“We had it well and truly sorted during our last run in AGT and the weekend ran flawlessly.

“We didn’t grab pole in either session, but we had great race pace and we knew we’d be strong in the longer runs.”

George hopes the Sydney Motorsport Park event is a catalyst for more a return to the Australian GT Championship in 2019.

“Ideally we’d like to run a couple of cars in 2019 for a full return to the championship, although despite the introduction of the new twin-turbo 4-litre Vantage, we’ll be running the 6.0-litre naturally aspirated V12 for the time being,” said George.

“We know the car and know its strengths, it’s a tried and tested package and we’re looking to prove that again this weekend.”

Opening practice for the fifth round of the combined Australian GT Championship and Trophy Series field gets underway on Friday (August 3) with a hectic schedule.

Every Australian GT session will be broadcast live on Fox Sports, channel 506.