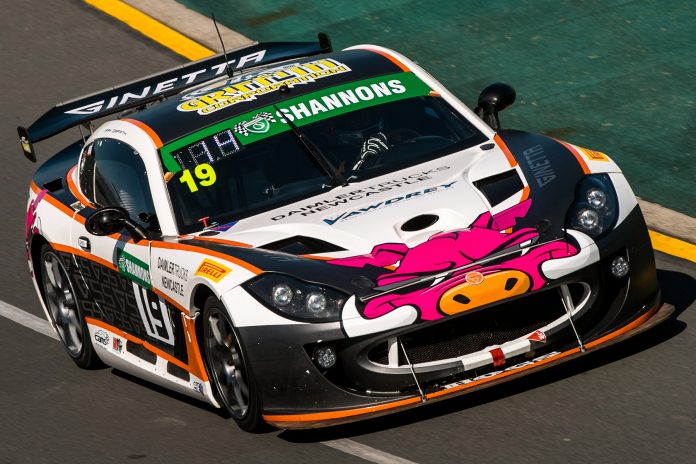 Four manufacturers will battle for GT4 honours during the opening round of the CAMS Australian GT Championship at Melbourne’s Albert Park, with McLaren and Audi taking the fight to 2018 title rivals KTM and Ginetta across the opening four races of the season.
Last year the GT4 championship was dominated by Aston Martin’s Jeremy Gray with cameo appearances from a number of different drivers in the M-Motorsport KTM X-Bows, one of which – Justin McMillan – saw a comfortable victory in wet conditions during the third race at Albert Park to put himself right into title contention.
McMillan then claimed the round win at The Bend Motorsport Park to take the championship points lead before concentrating his efforts elsewhere across the remainder of the season leaving Gray to battle new KTM recruits David Crampton and Trent Harrison across the closing rounds.
McMillan and long-time co-driver Glen Wood will be back for a full season assault in the #48 M-Motorsport KTM, looking to put the experience they gained from their recent Bathurst 12 Hour Class C victory to good use, although they will be faced with a strong challenge from the #50 Vantage Racing KTM of team-mates Crampton and Harrison.
Mark Griffith will be back in a Ginetta G55 GT4, the former GT Sports champion (2013-2014 in a Ginetta G50 GT4) looking to improve upon his string of podium results from Melbourne last year before switching back to his Mercedes-AMG GT3 for the forthcoming Australian Endurance Championship rounds.
Victor Zagame debuted the V10-powered Audi R8 LMS GT4 at Sandown last year, the part-time GT driver securing a trio of podium finishes with a best result of second during the opening 40-minute race. He will make a return to the grid this weekend for Audi’s debut run on the streets of Melbourne with the new GT4, and he will be looking to make an impression on the field as he looks to a number of AGT appearances across the coming season.
Whilst the 5.2-litre V10-powered Audi will present a strong focal point against the naturally-aspirated V6-powered Ginetta and the turbo-charged two-litre (Audi) KTM X-Bows, perhaps the most anticipated GT4 car on the AGP grid will be the new McLaren 570S GT4 that will be campaigned by 59Racing’s Ryan Simpson.
The reigning Australian Production Car Champion will be making his debut at Albert Park behind the wheel of one of the most successful GT4 cars on the market, the stunning McLaren 570S GT4 powered by a 3.8-litre twin-turbo V8.
The experienced Simpson (who has a lengthy resume that includes multiple open-wheel and sportscar titles to his name) is expected to shake up the established GT4 stars in a car that has been winning races around the globe since its 2016 debut, although testament to the SRO-inspired balance-of-performance, despite its GT-heritage, it will have no easy time of things at Albert Park with all four marques expected to be in the mix at the pointy end of the field.
The Australian Grand Prix event begins with two qualifying session on Thursday 14 March ahead of the first of four 25-minute races.
Rnd#1, 2019 CAMS Australian GT Championship
Albert Park Grand Prix Circuit, Melbourne (14-17 March)
SCHEDULE (times AEDT – GMT+11):
Thursday, 14 March, 2019
11:50am – Qualifying#1 (20-minutes)
3:40pm – Qualifying#1 (20-minutes)
6:25pm – Race#1 (25-minutes)
Friday, 15 March, 2019
10:15am – Race#2 (25-minutes)
Saturday, 16 March, 2019
9:55am – Race#3 (25-minutes)
Sunday, 17 March, 2019
11:40am – Race#4 (25-minutes)
2019 CAMS Australian GT Championship
Rnd#1 – 14-17 March, Australian Grand Prix, Melbourne, Victoria [SPRINT]
Rnd#2 – 2-4 May, Barbagallo Raceway, Western Australia [SPRINT]
Rnd#3 – 7-9 June, Phillip Island Grand Prix Circuit, Victoria [ENDURANCE]
Rnd#4 – 12-14 July, The Bend Motorsport Park, South Australia [ENDURANCE]
Rnd#5 – 20-22 September, Sandown Raceway, Melbourne, Victoria [ENDURANCE]
Rnd#6 – 25-27 October, Gold Coast, Queensland [SPRINT]
Rnd#7 – 8-10 November, Sandown Raceway, Melbourne, Victoria [SPRINT]
Pirelli AGT SuperSprint – 28-29 November, Mount Panorama, Bathurst