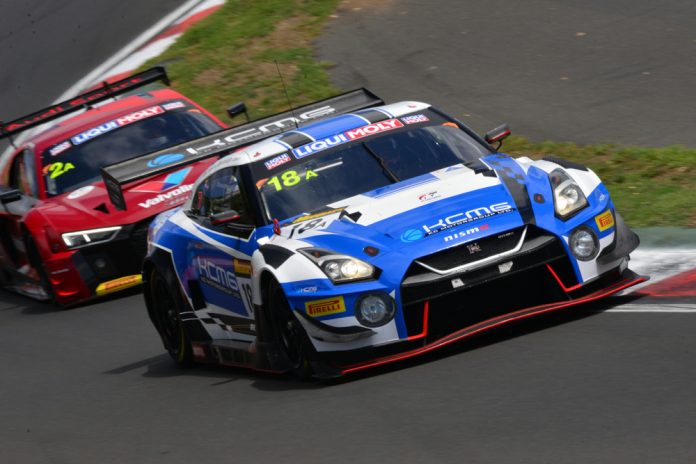 A strong qualifying saw the #18 Nissan GT-R progress into the top-10 shootout and start from ninth on the grid. Oliver Jarvis immediately made up positions during the start under darkness, emerging in seventh by the time the sun rose at the end of the first hour.

Jarvis handed over to Bathurst debutant Edoardo Liberati in the second hour under a caution period and battled into the top-five. The Italian handed over to Alexandre Imperatori whilst in the podium places, which the car continued to threaten as an excellent strategy unfolded.

Later in the race, Imperatori worked his way into the lead ahead of the last stint where he settled into fifth during a safety car period in the final 30 minutes. Despite a penalty for a driving infringement, the car finished seventh and still on the record-breaking lead lap of 312.

Meanwhile, Katsumasa Chiyo made up three places from 16th on the grid during a strong opening stint in the #35 Nissan GT-R NISMO GT3. The 2015 Bathurst winner handed over to double Super GT champion Tsugio Matsuda who led after a mammoth stint, highlighted by a bold move on the Mountain Straight.

Local hero Joshua Burdon then assumed driving duties and crucially fended off an initial attack from behind, but a technical issue caused the car to stop on track. Burdon managed to bring it back to the garage but fell off the lead lap while the team fixed the issue. The 26-year-old set the fastest lap, finishing 15th after a strong recovery.

Next up is round two of the Intercontinental GT Challenge at Laguna Seca, the California 8 Hours (30 March), in which KCMG will again field two Nissan GT-R cars.

Oliver Jarvis, #18 Nissan GT-R NISMO GT3: “This was definitely the toughest race of my life. We struggled with cooling, which meant it was almost impossible to do a full single stint. Without this issue I honestly believe we would have been fighting for the victory, as we had great pace and the strategy and pit stops from the team were perfect. So it’s disappointing to come away with seventh, but there are so many positives to take from the weekend. Thanks again to KCMG and Nissan for giving us such a competitive car.”

Alexandre Imperatori, #18 Nissan GT-R NISMO GT3: “It’s a bit of a bittersweet feeling to finish seventh as we had the potential to do something very special, showed by how we controlled the race at two-thirds distance. Unfortunately the end of the race became a fight for survival with no driver cooling and extreme temperature. However, I’m very proud of what we achieved as a team in these conditions. Everyone did a fantastic job and we can keep our heads held high and look to the coming races positively.”

Edoardo Liberati, #18 Nissan GT-R NISMO GT3: “What a crazy race, we led for a few hours and it was amazing for me to fight for the win on my Bathurst 12 Hour debut. I’m really proud of what we achieved in hot conditions, our bodies were over the limit – it was the hardest race of my life. Without some issues we could have won it, but I’m still very grateful to finish. Thanks to KCMG and NISMO for such a great job, as well as my team-mates Oliver and Alexandre for their superb driving.”

Joshua Burdon, #35 Nissan GT-R NISMO GT3: “It’s very disappointing for our car, as we were running in the top three before the issue. Everything was going to plan, the Nissan was very quick on our strategy. We ended up taking the fastest lap in my last stint, which shows we have the pace. Thank you to my team-mates and everyone at KCMG for the hard work, I really appreciate it.

Tsugio Matsuda, #35 Nissan GT-R NISMO GT3: “The Mount Panorama Circuit was a lot of fun and got faster throughout the weekend. I temporarily led the race after making a few overtakes. However, we had some issues which is regrettable but this is racing. The Nissan GT-R showed very good pace, so I am looking forward to the next race. I really appreciate everyone’s support.”

Katsumasa Chiyo, #35 Nissan GT-R NISMO GT3: “First of all, thank you to KCMG who have been doing a lot of work since Dubai. Bathurst is very special for me. Our race pace was very strong. We could have been fighting for the podium if it weren’t for the bad luck we had. My team-mates both drove very well and adapted well to this difficult circuit. Thanks once again to all involved.”

Wright Motorsports Returns to the California Eight Hour with an All-Factory...