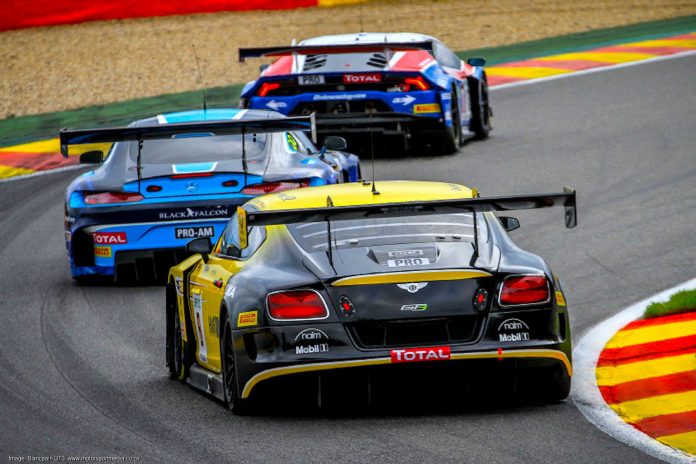 South African Abt Bentley Continental GT3 race star Jordan Pepper may have been gutted by his team’s 18th hour retirement at the weekend’s Spa 24 hour race, but he remains most positive thanks to an otherwise very good weekend’s work. German-based Johannesburg driver Pepper showed great form in qualifying and enjoyed a strong race, while it lasted.
“Spa was unfortunately one of those races that was not good to me,” Jordan rued. “We were forced to retire with just on six hours to go after fighting though the night for a top ten finish. “That’s a real shame because we fought so hard to get back into that top ten fight after losing laps through the night — it would have been brilliant to log my first 24-hour finish in the top ten.
“Sadly it turned out to be my third DNF in a row, but overall it was a positive weekend for me. “The car felt very good from the get-go and we stuck to our own program through the weekend, but by the time pre-qualifying came, we were really on it and I was delighted with my fourth to put it into the pre-qualifying session.
“We have two chances to get into the top 20 qualifying shootout with our tyre allocation and I made one small mistake that cost me and we were outside of the top 30 after the first run. “But I put it all together and turned in a really unbelievable lap in the dark to go seventh and right into the top twenty.
“The shootout came and it was a bit tougher because everyone hauls out that little last bit for that single flying lap — I was a couple of thousandths off the top three so it was another great moment — the team was very happy and I was really proud to be the only silver driver inside the top 20.
“The race went well until early Sunday morning and then it was all over. “Pity, but that’s racing — now it’s time to look ahead to the rest of the season and next year, but I am pretty chuffed with what I have achieved this year.”

Win a fully funded GT3 drive in the 2018 Blancpain Sprint...