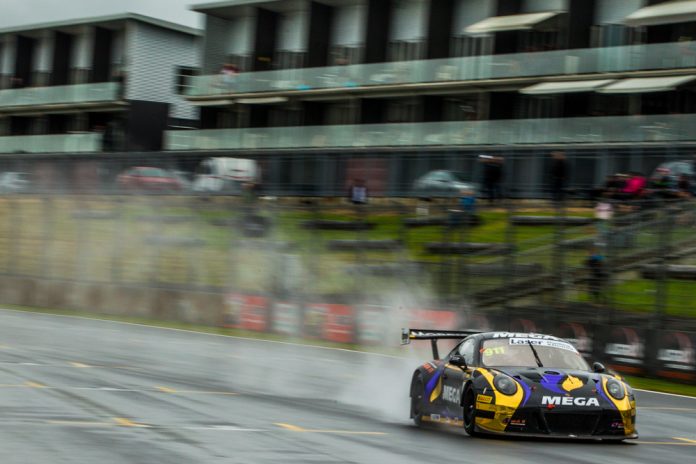 John Martin has handed the Mega Racing team pole position for the Laser Plumbing & Electrical Hampton Downs 500 thanks to a storming lap in the Top 10 Shootout.

Martin and co-driver Liam Talbot will head a Porsche 1-2 with Brad Shiels and Andrew Macpherson set to line up second in the AMAC Motorsport entry.

The Walkinshaw GT3 run Porsche had proved fastest in Practice 2 on Saturday morning, before topping both Qualifying sessions to head into the shootout with 20 valuable championship points.

Last on track, Martin was forced to watch his rivals from the pit lane as Shiels set the early running.

A brilliant lap saw the Porsche driver hold top spot for much of the session, fending off the likes of Cameron McConville, Steve Richards and Tony D’Alberto.

Penalties to the Fraser Ross and Alvaro Parente YNA Autosport/McElrea Racing McLaren, and the Autex Eggleston Motorsport Mercedes-AMG GT3 of Dominic Storey and Peter Hackett, left them at the bottom end of the top ten after the Shootout.

Parente had set a 1:43.451s before stewards deemed he crossed the blend line at pit entry, while Storey was judged to have been too late arriving at pit exit to start his lap by race officials.

Storey had set the provisional pole time at 1:44.790s before Parente took to the circuit, the Portuguese driver setting a time that would have seen him on the front row alongside Martin.

Former A1GP racer Jonny Reid posted a time that will see him lineup with Neil Foster in third aboard the Giltrap Audi R8 Ultra in an impressive performance from the New Zealand entry.

A wild lap from Steve Richards had the crowd on its feet as he slid his way around the circuit at the wheel of the BMW Team SRM M6 GT3, recording a 1:46.772s lap.

He and Dylan O’Keeffe will start one place back from Max Twigg and Tony D’Alberto, who posted a 1:46.504s lap in the Shootout to lock down fourth on the grid.

Already represented by Reid and Foster in the Top 10, International Motorsport also boast Matt Whittaker and Johnny Udy in the ten, the pairing poised to start sixth in the 100% Electrical/Whittaker’s entry.

The only other driver to set a time was Cam McConville, the Timken Zagame Lamborghini Huracan poised to line up eighth with Adrian Deitz for tomorrow’s race.

Not taking to the Top 10 Shootout was the Valvoline Jamec Pem Racing entry of championship leaders Tim Miles and Jaxon Evans after a crash ruled them out of the session.

During the worst of the day’s treacherous conditions, Miles aquaplaned off the circuit which prevented the team from taking part in the shootout – though are expected to make the start of the race.

The Laser Plumbing & Electrical Hampton Downs 500 is scheduled to commence at 12:30 NZDT (10:30 AEDT) with a live telecast across New Zealand on TV3 and Australia courtesy of Fox Sports, Channel 507 while a livestream is also available via the Australian GT website.