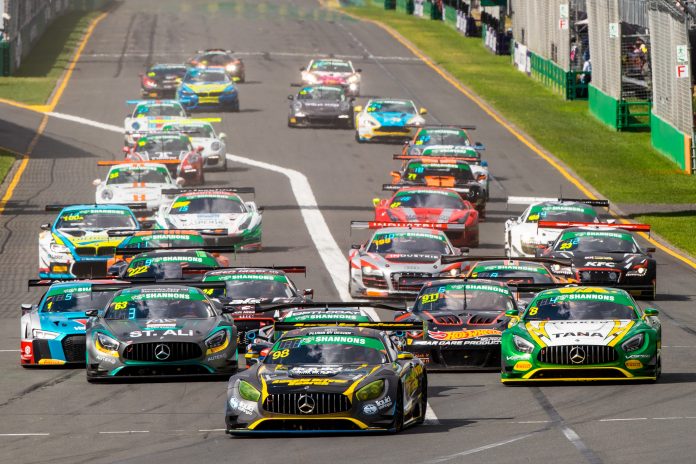 With a lights-out to flag lead, Jaie Robson won the fourth race and took overall first in the opening round of the CAMS Australian GT Championship at Albert Park today.

Robson saw off the early challengers to steer his Mercedes-AMG GT3 across the finish line four seconds ahead of his nearest rival.

Starting out of position three for the 11-lapper, Peter Hackett dropped to fifth on the opening lap before progressively moving the Eggleston Motorsport Mercedes to third, and then nabbed second off Fraser Ross (Total McLaren 650S GT3) on lap seven.

Unlike the early events, he had to come from behind John Morriss (Porsche GT3-R) after contact with fellow Audi driver Matt Stoupas at the first corner.

Over the four races it was Justin McMillian (KTM X-Bow) who was third behind Gray and West.

Robson now leads the Australian GT Championship after the opening round.

The competition now moves to the inaugural event at The Bend Motorsport Park in South Australia next month (April 14-15) for the first Endurance format round of the season.

Peter Hackett: “Fantastic start to the season. The car was finished on Wednesday night and first turned a wheel in qualifying one. We have just methodically move forward over the weekend.”

Dom Storey: “I came here to help Peter and come away with points.”

Scott Taylor: “Would have been nice to be on the podium but the car doesn’t have a scratch on it.”

Nick Kelly: “Matt (Stoupas) and I had some rubbing of panels in turn one by both going on the outside while John (Morriss) went down the inside and into the lead. He didn’t make it easy for me to get past.”

Matt Stoupas: “That contact with Nick put me back somewhat.”

John Morriss: “I plucked a couple of gears at once and that gave the Audi the run on me to get past.”

Xavier West: “Had a great race with Jeremy (Gray), just needed a couple of more laps and it could have been interesting.”

Ken Collier: “A great weekend for the GT Championship, the best start to a season that we have ever had.”

Commanding performace from Lago in Race 2 at Albert Park