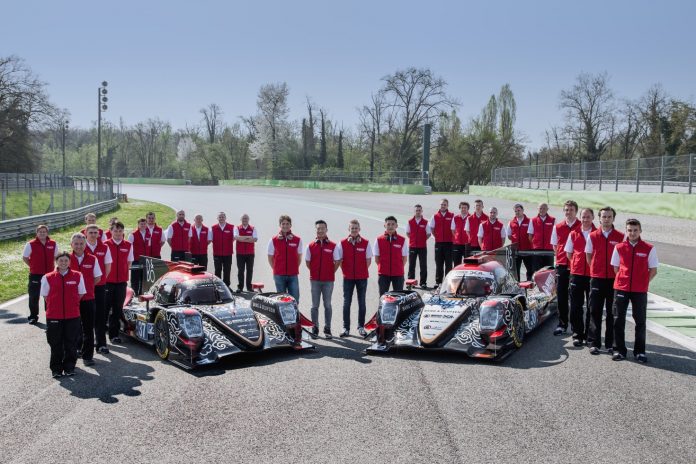 Jackie Chan DC Racing x Jota Sport is raring to go for the start of the 2017 FIA World Endurance Championship in a fortnight after topping the LMP2 times in the final session of the two-day season Prologue in Monza, Italy at the weekend.

Ho-Pin Tung set a lightning lap in the final track session of the two-day Prologue, putting  the #38 car 0.111s ahead of his closest rival in the intensely-competitive, 10-car LMP2 category.

The achievement, which will be a welcome early birthday gift for team founder and Hollywood movie star Jackie Chan, was the culmination of a strong weekend for the team, during which the dazzling line-up of driver talent and team expertise came together with the rest of the WEC field for the first time, and is an indication of what is to come from the formidable outfit this season.

Although the team has already completed an extensive pre-season testing programme, the two-day official Prologue, with the entire 2017 entry present, provided a useful benchmark as well as final chance to ensure the two-car LMP2 team is working like clockwork ahead of the 6 Hours of Silverstone season-opener on April 16.

Drivers David Cheng, Alex Brundle, Tristan Gommendy, Ho-Pin Tung, former LMP1 driver Oliver Jarvis, and WEC newcomer Thomas Laurent all had runs in the new car, with lap times proving the team is going to be a strong WEC LMP2 title contender this season amongst the most competitive field in the championship’s history.

Jackie Chan DC Racing x Jota Sport will take to the famous British track for free practice on Friday, April 14, with Qualifying the following day and the race getting underway at noon local time on Sunday, April 16.

“For us it’s been a fantastic two days. The whole team has gelled really well, but to be here with every single team in the field, we know we’re competitive – from our average times and our fastest running. Through the first day I think we did a lot of productive work; we focused a lot less on lap times and did the programme we needed to do. The second day, with the weather being variable, it was very hard to do any performance running, but I think from our point of view we sorted out all the issues and all the advances we needed to make, both as a team and for a lot of our new components. This year it’s a new car with new ECU, new almost everything, so sorting out the little details for us is more important than putting on a new set of tyres and going out and setting a lap time.

I think Silverstone’s going to be a very exciting race, especially in LMP2 where the competition is going to be very close we’re sure. For myself I’m really looking forward to Silverstone and a high downforce car with more power this year. I think that track is going to be amazing with these cars. Here we’re running four seconds off the leading LMP1 hybrids. At Silverstone it’s going to be absolutely insane. Who knows, one of the LMP2 cars may be on the overall podium.”

“It’s great to finish fastest in the final session of the WEC Prologue. We’ve worked well over the past two days at Monza and we’ve managed to improve bit by bit, mainly by focusing on the upcoming races. Everyone at Jackie Chan DC Racing and Jota Sport is gelling very well, we have a great atmosphere and I couldn’t be more pleased! All six drivers share the same feedback and feeling on car behaviour, which is a big advantage for getting to grips quickly with our new Oreca 07’s.

We have learned a lot and still have a lot to do, but this is a very good start. I had the honour of making Jackie Chan DC Racing the first-ever Chinese team to top the time sheets and it leaves us wanting more – we’ll definitely be trying to do that again at Silverstone!”

“I think it’s been a really successful two days testing for us. The main aim coming here was just to work through our programme, focus on ourselves and make sure we arrive in Silverstone in the best shape possible. I think we’ve managed to achieve that. There’s still lots of hard work to do between now and Silverstone. The team is working really well together. All six drivers are getting on really well together and there’s a great atmosphere in the team. I think leaving here we’re confident we’re in good shape, but  we’re aware we’ve got some really strong competition, so we’re going to have to be really on top of our game when we arrive in Silverstone, but I’m very positive and everything so far looks very good. Silverstone is a home track for me, and I think when we arrive there, we’ll be in the best shape possible.

“Target for Jackie Chan DC Racing by Jota Sport from a technical view was to work operationally as a two-car team in the most efficient and effective manner. Moving forward, some of the processes and procedures that we work on stand us in good stead for the rest of the year. It’s also important to cycle the drivers through the car and get some of the system checks done. We’re in a very fortunate position in that we’re a 2-car team so we can complete twice the amount of development work.  It’s important that the crew separate and them come together and we cover the ground that we should do using the two cars.

There’s really good integration between the two cars, so we’re really pleased how it is. Some of the set up work we’ve been doing stands us in really good stead. We’re very ready for Silverstone. Everyone’s looking forward to it and we’re ready and waiting to go.”