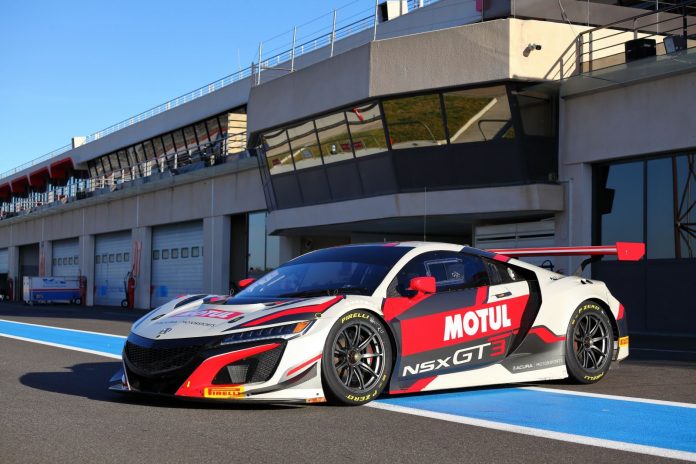 The Japanese manufacturer is one of eight full-season entrants but chose to skip the opening round at Bathurst in February. Its first official Intercontinental GT Challenge appearance therefore takes place at WeatherTech Raceway Laguna Seca where the previous-generation NSX GT3 finished fourth in 2017 courtesy of RealTime Racing’s one-off entry. Hondas also contested 2018’s Total 24 Hours of Spa and Suzuka 10 Hours in a similar capacity.

However, with championship points now at stake, Honda Racing has selected a full factory driver crew for California. Others could also make appearances at the subsequent three rounds.

Baguette, a former Le Mans class winner and FIA WEC LMP2 champion, first joined Honda’s Super GT roster in 2014. Three years later he claimed victory at the final Suzuka 1000km before Japan’s most prestigious GT race switched to its current 10-hour, Intercontinental GT Challenge format. The 33-year-old Belgian is also no stranger to the previous NSX GT3, which he raced at the Total 24 Hours of Spa and in International GT Open last season.

“This is a very exciting moment for me as it means I’ll be racing the NSX GT3 Evo as well as the Super GT NSX GT500 this year,” he said. “My first experience of racing the NSX GT3 was at my home event, the 24 Hours of Spa, last year with our Pro-Am entry. That was a fantastic event, but returning this year to compete in the Pro category moves things up a level. Both Renger and Mario are fantastic GT drivers with a lot of wins to their names and together I think we’ll make a strong and well-matched line-up.”

His co-driver, Farnbacher, debuted the NSX GT3 Evo in January’s Daytona 24 Hours and was a winner in IMSA’s GTD category with the previous version last year. The 26-year-old German’s CV also features two class victories at Sebring and another at Petit Le Mans.

“I’m so happy to be a part of this programme and extremely grateful to everybody at Honda that has pushed for me to be involved,” he said. “One year ago I was set to be the ‘extra’ driver in the NSX GT3 in IMSA, but did half the season and won a race, which has led to a full year in the USA. To add this IGTC programme, with such a strong team and a brilliant set of team-mates, is incredibly exciting. GT3 racing is now a series of sprints, but we’ve already seen that the NSX GT3 Evo can be a strong contender in either this condition or in pure-endurance terms, so I’m excited.”

“I’m thrilled to be chosen to be a part of Honda Racing’s IGTC programme, and especially to be making my debut in the NSX GT3 Evo at my favourite circuit, Laguna Seca,” he said. “When I drove the NSX GT3 at the end of 2017, I could see that this was a car with a lot of potential and through the FIA GT World Cup event we made a huge amount of progress. To see some NSX GT3 Evo customer teams make such a strong start to this season both at Daytona and with the [Blancpain GT World Challenge America] win in Austin shows how far this programme has come and I’m excited about the potential of what we can achieve this year.”

Its 2019-spec car features a number of upgrades, such as a new front splitter and bodywork, that have been aimed at reducing drag, improving aerodynamic efficiency and cooling, and increasing driveability. New turbochargers offer improved throttle response, boost control and fuel economy while an upgraded data and display unit further enhances the driver experience.

“We are very pleased to confirm our presence in the Intercontinental GT Challenge this year, which underlines our growing commitment to GT3 racing and provides an opportunity to showcase the performance of the NSX GT3 Evo to several key new markets across the world,” he said. “Through the NSX GT3 Customer Racing Programme, launched in 2017, we are delighted to see a growing number of cars competing in domestic and international GT3 racing and through this new programme, featuring a strong team and an exciting driver line-up, we have an excellent opportunity to add to the growing number of successes being achieved by the car.”

This year’s California 8 Hours takes place on March 28-30 before the Intercontinental GT Challenge heads to Europe for the Total 24 Hours of Spa on July 25-28. The Suzuka 10 Hours is up next just one month later (August 23-25) ahead of the season-closing Kyalami 9 Hour, which returns to the international calendar on November 21-23 for the first time since 1982.