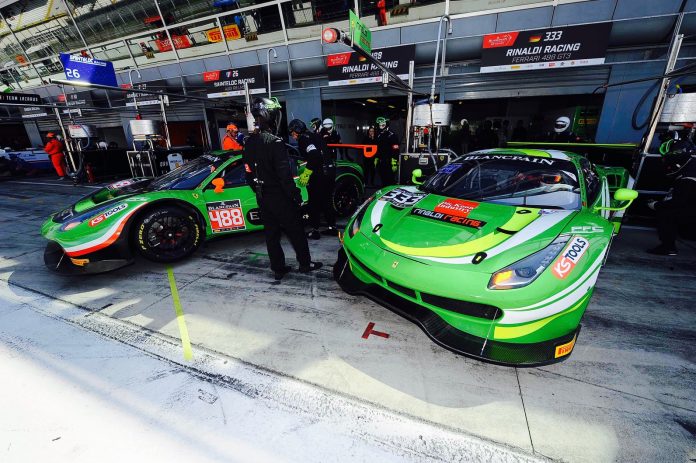 Last weekend Rinaldi Racing traveled to Monza for the first round of the Blancpain Endurance Series. On board two Ferraris 488 GT3. On the Ferrari with the starting number 333 Alexander Mattschull, Rinat Salikhov and Daniel Keilwitz shared the work behind the steering wheel in the ProAm class. On the sister car with the starting number 488 in the Am class Pierre Ehret and Rino Mastronardi.

On Sunday afternoon, the first Endurance race of the season started. Alexander Mattschull took over the start in the #333, on #488 it was Pierre Ehret. Already at the start before the first turn, an accident occurred with several racing cars. Pierre Ehret passed well through the debris; unfortunately not so Alexander Mattschull. While braking he hit the car in front and at the same time, another car hit him badly at the rear. The consequence was a tire damage on the right rear so that he had to come to the pits. After a fast tire change, he joined back the track and queued as penultimate. Just after that, the red flag was waived. All participants had to line up at the start and finish line. The team hurried on the track to continue to repair the #333 because the rear bumper was damaged and some tire parts and debris were caught in the Ferrari.

For the restart Mattschull continued from the tenth position in ProAm class, Ehret still had his first position. The first pit stops for both cars went well. Alexander Mattschull handed over the car to Rinat Salikhov and Pierre Ehret to Rino Mastronardi. Mastronardi showed an impressive performance on the lap times and gained a gap of 14 seconds on the second in Am class. Salikhov could move forward and at the next pit stop, he passed over the Ferrari 488 GT3 to Daniel Keilwitz on the ninth position in class. Daniel Keilwitz started a great catch-up race and at the end, he reached a conciliatory fourth place in ProAm class. At the last pit stop of the #488 Mastronardi handed over to Pierre Ehret. But already after two minutes, the Ferrari had to come to the pits. Due to a secondary damage of the start accident the Italian racing car had to quit the race.

Michele Rinaldi: „This was not our weekend. The ProAm class is very strong, but we felt confident for a place on the podium. But unfortunately, we get involved in the accident at the beginning of the race. Here in Monza, we dominated the Am class, but we had technical problems. It is a pity for Pierre Ehret and Rino Mastronardi. Our both Ferraris were strong. Well, now let’s see how the next two rounds in England will be.“

Next week Rinaldi Racing will take part in the second run of the Blancpain Sprint Series in Brands Hatch with Alexander Mattschull and Daniel Keilwitz. The team will stay in England after the race to continue his travel to Silverstone for the Blancpain Endurance Series.

Monza : Kaspersky Motorsport within sight of the podium

A win and two podium finishes for Ferrari at Monza