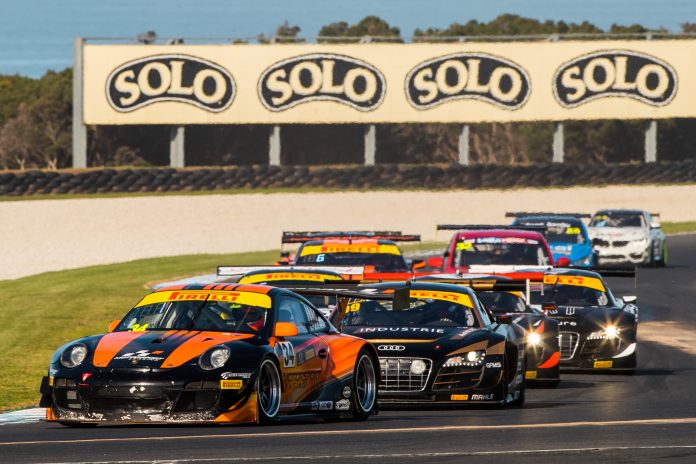 The CAMS Australian GT Trophy Series will be decided this weekend as Winton plays host to the final round of the season.

Rejoining the Shannons Nationals bill, the Australian GT Trophy Series title fight is poised on a knife-edge, with five drivers vying for the 2018 title.

Nick Kelly currently heads the title battle, having sat atop the standings since the opening race of the year at Albert Park in March when Australian GT supported the Formula 1 Rolex Australian Grand Prix.

A dominant weekend in Melbourne laid the foundations for his season’s campaign, but it hasn’t been one-way traffic for the Industrie Audi driver.

At Sandown for the second round of the campaign Rio Nugara broke through for a maiden victory, the EAT Furniture backed driver showing increased form at every round of the competition.

Nugara’s stunning pace was rewarded with a near-perfect weekend at Phillip Island where he walked away with 213 of the 220 points on offer, closing the gap on Kelly as the title fight continued to heat up.

Though yet to win a round this season, metronomic consistency from Matthew Stoupas aboard the Kentucky Fried Chicken Audi R8 LMS Ultra GT3 has kept the Victorian well and truly in contention heading into the final round.

At the last round at Sydney Motorsport Park the wick was turned up even further in the championship hunt, which will be resolved at Winton this weekend.

A retirement from Race 2 in Sydney, Kelly was unable to start the final race of the weekend, giving both Nugara and Stoupas the opportunity to narrow the gap in series standings.

With 220 points on offer this weekend, the top three are split by just 32 points, making it the most closely fought finale in Trophy Series history.

The title battle will resume in qualifying on Saturday afternoon, with ten points up for grabs in both sessions, and the fastest time rewarded with pole position for Sunday’s opening race.

Prior to qualifying comes a single practice session for teams and drivers to fine tune their machines, before two 50-minute races on Sunday, after which a new Australian GT Trophy Series winner will be crowned.