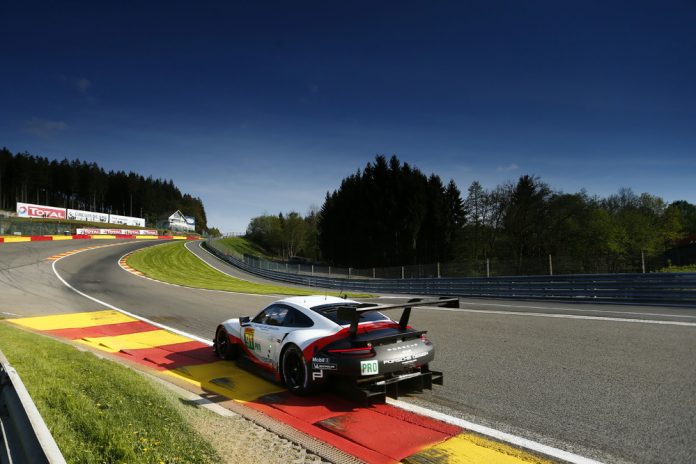 Porsche reaches a match point at round seven of the FIA Sports Car World Endurance Championship (WEC) at Spa-Francorchamps (Belgium). The factory squad from Weissach could take home the manufacturers’ title at the penultimate round of the 2018/2019 WEC Super Season. Two of the ca. 510 hp Porsche 911 RSR will go up against vehicles from Aston Martin, BMW, Ford and Ferrari. The six-hour race on May 4th marks the second visit to the Belgian venue in the current WEC season. It was here that the Super Season took off last year. At that event, the two works cars finished on positions two and four.

The race
The 7.004-kilometre racetrack not far from the German border has a long tradition. During its rich history in sports car racing and Formula One, fans have been treated to many gripping and spectacular races over the years. The “Ardennes rollercoaster”, as the Circuit de Spa-Francorchamps is often called due to its wildly undulating layout, includes 21 corners. Fast passages such as Eau Rouge and Blanchimont are as famous as the tight La Source hairpin.

The Porsche GT Team drivers
The Sebring winners Gianmaria Bruni (Italy) and Richard Lietz (Austria) tackle the race in the No. 91 Porsche 911 RSR. After seven of this season’s eight rounds, the pair ranks second in the drivers’ classification. Only their brand colleagues Kévin Estre (France) and Michael Christensen (Denmark) are in a better position in the identical vehicle with the starting number 92. The winners of the 2018 Le Mans 24-hour race and the six-hour event in Fuji (Japan) hold a championship lead of 25 points over their colleagues from the Porsche factory squad.

The customer teams
Three Porsche customer teams field a total of four 911 RSR in the GTE-Am class. Porsche works driver Jörg Bergmeister (Germany), the American Patrick Lindsey and Egidio Perfetti from Norway drive for Project 1. The trio in the No. 56 car currently lead the drivers’ classification in the GTE-Am class and could also score an early title. Moreover, the squad from the northern German town of Lohne are on track to claim the team championship. Driving the No. 86 car for Gulf Racing is Porsche Young Professional Thomas Preining (Austria) and the two British racers Michael Wainwright and Benjamin Barker. Dempsey Proton Racing campaign a pair of Porsche 911 RSR. In the No. 77 vehicle, Porsche Young Professional Matt Campbell (Australia), Christian Ried (Germany) and Riccardo Pera (Italy) are determined to continue their good run. This driver crew won the previous two races in Shanghai (China) and Sebring (USA). Porsche Young Professional Matteo Cairoli (Italy) shares the cockpit of the No. 88 Porsche 911 RSR with the Italian father-son pairing Gianluca and Giorgio Roda.

The Porsche 911 RSR
The Porsche 911 RSR celebrated its debut in the WEC Sports Car World Championship at Silverstone in 2017. In the current 2018/2019 Super Season, the racer from Weissach has clinched first and second in the GTE-Pro class at Le Mans as well as the GTE-Am category class win. The water-cooled four-litre boxer engine is based on the seventh generation of the iconic 911 sports car and produces around 510 hp depending on the restrictor. At Le Mans, the number 91 and 92 vehicles raced in a special historic design.

The schedule
The six-hour race at Spa-Francorchamps gets underway on Saturday, May 4, 2019, at 13:30 hrs local time.

The race on TV and in the Internet
Round seven at Spa-Francorchamps can be viewed free-of-charge via live streaming from 13:00 to 20:00 hrs on sport1.de. The free-to-air station Sport 1 also broadcasts the race live from 14:30 hrs to 14:45 hrs and 16:10 to 20:00 hrs. Eurosport televises the start phase live from 13:15 to 14:45 hrs (Eurosport 2) and between 18:30 and 19:55 hrs (Eurosport 1). Moreover, the entire race can be watched on the pay-TV channel Eurosport Player from 13:30 to 19:30 hrs. The pay-TV channel Motorsport.TV offers a live broadcast of the qualifying and race. For a fee, the FIA WEC app offers live streaming of the complete race as well as the time-keeping.

Comments before the race
Fritz Enzinger (Vice President Motorsport): “After three years of harvesting LMP1-class titles, we could move straight on to the next world championship with our Porsche 911 RSR. The fantastic results in the highly competitive GT category over the past months have put the manufacturers’ title within our reach at Spa. It would be a dream if we succeed in securing it, and then we’d be able to share in the excitement of the duel between our two driver line-ups at Le Mans for the crown of the drivers’ world championship.”

Pascal Zurlinden (Director GT Factory Motorsport): “After our recent victories in the IMSA series and the WEC race at Sebring, we’re riding the wave of success. But we won’t allow that to distract us from our proven track. Meticulous preparation, perfect teamwork and flawless driving performances will again be the key to success at Spa. Scoring second place at the season-opener in Belgium last year, we narrowly missed out on winning. We still have some unfinished business at Spa-Francorchamps, and we’re keen to settle the score.”

Gianmaria Bruni (Porsche 911 RSR #91): “The Spa-Francorchamps racetrack is one of my all-time favourites on the WEC Super Season calendar. For us drivers, the circuit offers very special challenges – there is nothing quite like the ‘Ardennes rollercoaster’. We have a very clear task for the upcoming race: to clinch an early win of the world manufacturers’ championship for Porsche. We’ll do everything to achieve this goal. After our win at Sebring we’re feeling very confident.”

Richard Lietz (Porsche 911 RSR #91): “After our success in Florida there is now one major goal: victory at Spa-Francorchamps. We want to kill two birds with one stone. Firstly, to help Porsche on its way to the world title, and secondly, perhaps this would give Gimmi and I the chance to secure the drivers’ championship in the grand finale at Le Mans. We’d like to keep the door open to the last metre.”

Kévin Estre (Porsche 911 RSR #92): “What makes this special is the fact that this is the second time we’ll race at Spa this season under exactly the same conditions – usually such things never happen. We know precisely where we stand compared to the competition. A decent result should be enough to take home an early manufacturers’ championship title, but that won’t be enough for us drivers. A win would put us a step closer to the drivers’ championship.”

Michael Christensen (Porsche 911 RSR #92): “At the start of the 2018 season at Spa we fought hard against Ford and Ferrari. Now the competition is even tougher, because in recent months the other manufacturers have caught up to the frontrunners. It’ll be an extremely close race, but we’re feeling very well prepared. The Porsche 911 RSR is fully developed, the team runs like clockwork. We’ll be going for victory at Spa again this year.”

Jörg Bergmeister (Porsche 911 RSR #56): “After the eventful Sebring weekend I’m looking forward to our WEC home race. Hopefully the weekend in Belgium will be a little less turbulent than the previous one in the USA. There, we had to build a new car in record time and we managed to finish on the podium. It’s always a great pleasure to drive at Spa – especially with a car like the Porsche 911 RSR, which generates plenty of downforce. This makes the circuit even more fun.”

Matt Campbell (Porsche 911 RSR #77): “In May 2018 the WEC Super Season kicked off at Spa; now a year later we’re back there and it’s still the same season. I’ve never experienced this before. It feels really great to drive the Porsche 911 RSR through fast passages like Eau Rouge and Blanchimont. It’s a real treat for us racers. We now aim to follow up on our successes in Shanghai and Sebring with a third victory so that we can advance further in the championship.”

Thomas Preining (Porsche 911 RSR #86): “In Sebring, our car had a great balance. We made significant progress with the set-up, so I am really looking forward to the race in Spa. The circuit is completely different to the one in Sebring, but our latest findings will certainly help us. I reckon it will be a very close and spectacular race. I really hope that a Porsche customer team wins the GTE-Am class.”

Matteo Cairoli (Porsche 911 RSR #88): “Like all the other drivers, I very much enjoy the Spa circuit. If you trust your car implicitly, the drive is a real experience. The Porsche 911 RSR gives you the feeling you need to tackle Eau Rouge at high speed. My two teammates are very familiar with the circuit, so there’s nothing standing in the way of a good result.”

The Sports Car World Endurance Championship WEC
In the Sports Car World Endurance Championship (WEC), which was first contested in 2012, sports prototypes and GT vehicles compete in four classes: LMP1, LMP2, GTE-Pro and GTE-Am. They all compete together in one race but are classified separately. The Porsche GT Team contests the GTE-Pro class, while the customer teams Dempsey Proton Racing, Project 1 and Gulf Racing fight for honours in the GTE-Am class.