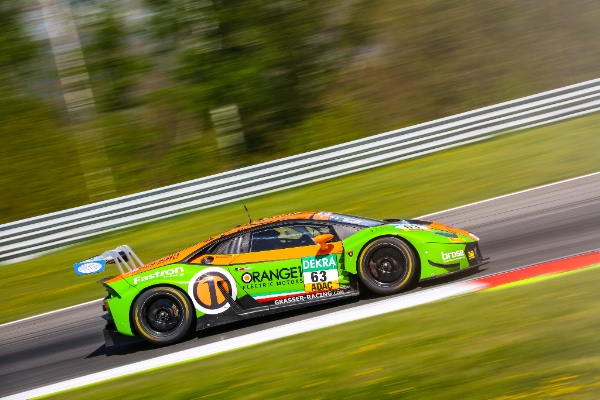 The second round of the ADAC GT Masters saw the three Lamborghini Huracán GT3’s complete two difficult race days at Most Circuit in the Czech Republic bringing the GRT Grasser Racing team only 1 point. The team did everything they could and there were no mistakes from the drivers, but luck wasn’t on our side this weekend.

GRT Grasser Racing team drivers Mirko Bortolotti and Andrea Caldarelli (#63 ORANGE1 by GRT Grasser) had traveled to Most as championship leaders to take on the next challenge, but could only complete the top ten at the end of Race 1 in yesterday’s action. In today’s Race 2, the team could only manage 12nd place.

The driver pairing of Christian Engelhart and Rolf Ineichen took P17, after having to stop early from the crash at the start in the first of two races. In Race 2, the #82 car crossed the line and saw the chequered flag to claim 15th place.

Next, was car #19 piloted by Ezequiel Perez Companc and Franck Perera, and after a frustrating Race 1, the team didn’t finish due to the earlier crash. They had to retire later in Race 2 as well and were only able to complete 19 laps.

It is a disappointing second round of the ADAC GT Masters, but optimism remains high and the next one presents the team a chance to do better.

Mirko Bortolotti: “This is our first time here at Most and I think we did a decent job and focused on the race as much as possible. It was a good day for our car and the set-up felt pretty good in the end. We did a great job individually and as a team.”

Andrea Caldarelli: “We were unlucky in Quali 2 today, because of a puncture when I’ve hit a curb, so we didn’t have the pace to fight at the front. To be honest, we were hoping for more from this race. All we could do was keep going and get as many points as possible for the championship.”

Christian Engelhart: “It wasn’t a great qualifying and the race itself for us; we expected a lot better. We tried our best but things didn’t go our way.”

Rolf Ineichen: “It was a tough day really. Having finished in 15th place was the maximum we could do this weekend. Now we are fully motivated and we need to focus on the next race, we were hoping for more.”

Ezequiel Perez Companc: “It was a difficult race weekend and I have mixed feelings to be honest. I was hoping for a much better result, but we didn’t finish in both races. We will be working hard to be stronger in the next round.”

Franck Perera: “The team, including the drivers, gave their maximum this week but we did not get the result we wanted so we must now prepare for the next race”.

Gottfried Grasser, the Team Owner: “It was a difficult weekend for us. We got a new BoP and we knew it from the beginning. However, we tried to get the maximum out of the race under these circumstances. The car #63 has done a good job and I’m very glad that they brought 1 point to the team in Race 1, finished in 10th position. It was a difficult race also for the car #82, having finished in P15, it was the maximum they could get this weekend. Car #19 have got a lot of problems and wasn’t able to finish in both races. This race doesn’t want to come to us, however the team has done a fantastic job all weekend and I’m very glad about that.”

New look for Callaway Competition in the ADAC GT Masters