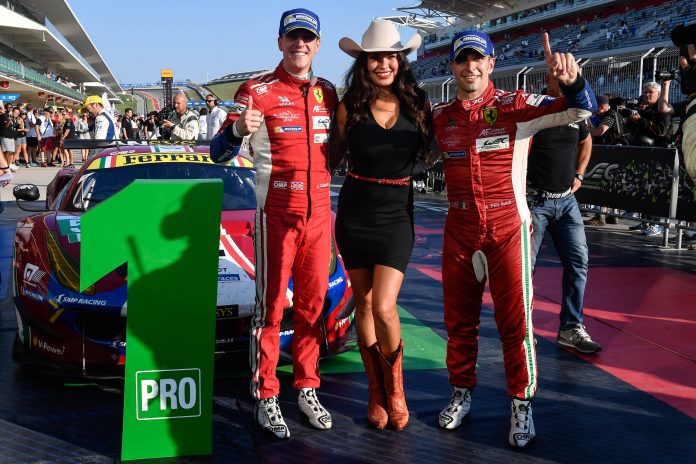 Ferrari recorded its third win of the season in the 6 Hours of the Circuit Of The Americas (COTA), the sixth round of the FIA World Endurance Championship. James Calado and Alessandro Pier Guidi triumphed in the 488 GTE no. 51, while Davide Rigon and Sam Bird took third. Despite the excellent result, it was a very difficult race. The two Ferrari crews had to rebuild their advantage at the midpoint, after the Safety Car neutralised the race, and then had to manage the tyres. No. 51 went on to secure the win despite suffering a puncture near the end. Ferrari also enjoyed a double podium in the GTE-Am class with the 488 GTE no. 61 of Clearwater Racing second, driven by Mok Weng Sun, Matt Griffin and Keita Sawa, and car no. 54 of Spirit Of Race in third with Francesco Castellacci, Miguel Molina and Thomas Flohr.

GTE-Pro. The GTE-Pro class race was difficult and complex right from the start, when Davide Rigon ceded first place to the Aston Martin no. 95 of Nicki Thiim and Marco Sorensen. In the second part of his stint, the Ferrari 488 began to catch up on the leading car despite its higher top speed. James Calado, in car no. 51, overtook his teammate and sped off in pursuit of the Aston Martin passing it just before the first pit stop. At that point it was decided to pursue different strategies for the two Ferraris with Rigon’s car using hard tyres. This would not have been detrimental were it not for the Safety Car coming on track at midrace to allow repairs to the barriers at Turn 11 after Mike Wainwright had spun off in the Porsche. The safety car thus wiped out the Ferrari’s lead over Porsche no. 92 and Aston Martin no. 95 (respectively 37 seconds for car no. 51 and 20 for no. 71). At the restart Calado quickly regained the lead but a change strategy was decided for car no. 71, abandoning the hards and trying to push to the limit over the last two hours. The Ferrari of Sam Bird returned to the track in sixth place but fought back to third at the finish thanks to a very gritty double stint by the British driver who in the end had to manage the tyres at their wear limit. Everything looked rosy for car no. 51. After the final pit stop it enjoyed a 36-second lead over Porsche no. 92 but with 11

minutes to go a puncture threatened to thwart a deserved victory. In the end, Alessandro Pier Guidi and the guys in the AF Corse pit performed a perfect tyre change allowing the Italian to set off again ahead of the Porsche with a minimal lead, which he managed down to the chequered flag.

Team ByKolles will hold a roll-out of its LMP1