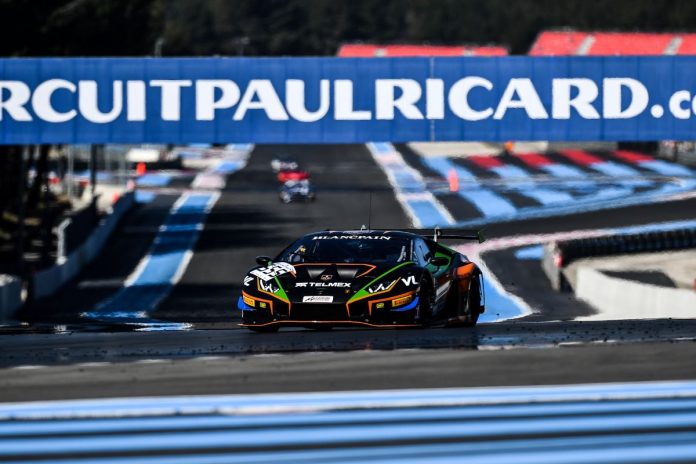 FFF racing successfully completed the two testing days at Paul Ricard, in what was the opening event of Blancpain GT Series. For the first time the team brought on track the Endurance Cup full season line-up, working in a more than competitive field, acquiring a lot of data useful for the season.

Both ORANGE1 FFF RACING TEAM cars entered the top-10 in the time sheets, with #563, driven by Caldarelli-Lind-Mapelli on fourth place in the second session, and #519, with Keen-Perera-Venturini at the wheel, ninth in session three. All the Factory Drivers for Lamborghini Squadra Corse faced an intensive working schedule, testing and comparing different set-up configurations and some technical solutions, in view of the first championship round scheduled at Monza on 14 April and the Paul Ricard 1000 kms race in June.

FFF Racing’s third car, the #555 entered in the Silver Cup, saw the three young guns of the squad cooperating to create a good working spirit, and looking forward to an intense season. Michele Beretta, the most experienced driver for the Endurance Cup, was associated with Diego Menchaca and Taylor Proto, who are regular Blancpain GT World Challenge Europe entrants. All three drivers were happy with the technical solutions designed by the team and are confident for the season’s start.

Fu Songyang, FFF Racing by ACM Team Owner
“The team worked really well at Le Castellet, a circuit very difficult and with a lot of technical points. For us, it has been the first official appearance, and I’m quite satisfied. We weren’t focusing on the lap times, but we had an idea on where our opponents are. The two factory  cars had a lot of things to test, while the Silver trio impressed me, as they achieved really fast a good balance between them, which is something very important in Endurance races. Paul Ricard is a track we will find in the season’s calendar for the 1000 km race, and although climate conditions will be very different, we got some useful information to let our engineers work in the upcoming weeks”.

First Aston Martin to the flag and a podium at Monza...

Rinaldi Racing takes up speed in 2018