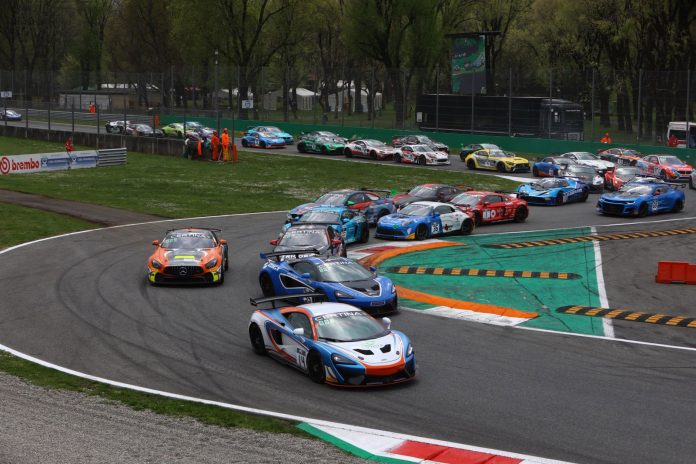 The Equipe Verschuur team kicked off their 2019 GT4 European Series campaign in perfect fashion with a victory at the Autodromo Nazionale di Monza. Daniel McKay and Benjamin Lessennes won the season-opening race in the McLaren 570S GT4.

McLaren teams had claimed a clean sweep of the front row in qualifying thanks to Charlie Fagg and Daniel McKay. The #55 Team GT McLaren started from pole, but it was McKay in the #14 Equipe Verschuur McLaren who took the lead of the race out of the first chicane.

Contact between Alec Udell and Gabriele Piana sent the RN Vision STS BMW through the grass on the opening lap, but by lap six the #111 BMW M4 GT4 was back in third place, ahead of the #25 MDM Motorsport BMW M4 GT4 and a fast approaching #69 V8 Racing Chevrolet Camaro GT4.R.

A safety car after the #24 Valvoline-True Racing KTM X-Bow GT4 came to a stop bunched up the field, which allowed the BMW drivers to close in on the leading McLarens. At the restart, however, McKay and Fagg had a big enough margin to keep them behind.

Fagg, Piana, Udell came into the pits at the end of the lap, while McKay continued for another lap. Olivier Hart in V8 Racing Chevrolet Camaro GT4.R left the pits leading the race, but he was unable to pull away as soon after the pit window closed the safety car was deployed again – as a result of contact between the #99 razoon – more than racing KTM and the #7 Street Art Racing Aston Martin.

At the restart, Hart was leading Benjamin Lessennes, Michael Benyahia, Marius Zug and Simon Knap, Cedric Freiburghaus and Jan Kasperlik. Lessennes took the lead from Hart at the Lesmo corner, with Benyahia moving into second. The McLaren drivers swapped places at the first chicane and when Lessennes was pushed wide it looked all over as he dropped behind Hart.

The Camaro driver then received a stop-and-go penalty for a too short pit stop and when Hart came into the pits, Lessennes moved back into third and soon after he overtook Knap to take second again. Before he was able to challenge Benyahia the safety car was deployed once more, this time to recover the #33 Bullitt Racing Mercedes.

With just over five minutes remaining, the race was restarted again and Lessennes immediately started his attack, taking the lead at the second chicane. The Team GT driver was not in a position to challenge the Equipe Verschuur driver anymore and after one hour Lessennes was the first to cross the line, followed home by Benyahia at 0.282s. MDM Motorsport’s Simon Knap finished in third place at 1.479s from the race winner.

Cedric Freiburghaus claimed fourth place for Phoenix Racing in a spectacular race to the line with Leipert Motorsport’s Jan Kisiel. The Audi and Mercedes were side by side on the final straight and it was Freiburghaus who finished just 0.002s ahead of his rival.

On his series debut and despite the safety car bunching up the field, Zug was able to keep Kasperlik behind him in the second half of the race to claim victory for the first time this season. San Marino-based W&D Racing Team finished third in Pro-Am, with Paolo Meloni and Massimiliano Tresoldi crossing the line ninth overall.

Selleslagh Racing Team’s Jean-Luc Behets and Johan Vannerum won the Am class in what was both drivers first race on the Italian track. Just four seconds behind Behets and Vannerum, Las Moras by Equipe Verschuur drivers Liesette and Luc Braams claimed a second place finish, with Street Art Racing’s Pascal Bachmann and Clement Seyler completing the Am podium.

Daniel McKay, #14 Equipe Verschuur McLaren 570S GT4: “This was good! We had a good tire from qualifying, which was nice and that made the race a little bit easier. Ben did a great job when he took over the car to come past the Camaro. Obviously then getting shuffled at turn 1 wasn’t very nice for him, but he did a great job to come back and win!”

Benjamin Lessennes, #14 Equipe Verschuur McLaren 570S GT4: “It wasn’t an easy race, but Daniel managed to get out of the first corner in first place. That was pretty good! The car was pretty well and in the end we finished first. So yeah, it’s good!”

Gabriele Piana, #111 RN Vision STS BMW M4 GT4: “It’s really nice. I was a bit disappointed after qualifying. So, I wanted to give the team something back. RN Vision gave us a great car, it was easy to drive and fast. I didn’t expect it, but I’m really happy I could sort of bounce back from a sub-par qualifying and give the team what they deserve.”

Marius Zug, #111 RN Vision STS BMW M4 GT4: “I hope my restarts will get better when I get more experience, because I lost a bit of time there. But, still we managed to keep a gap to the Porsche, so no real big fight with him. I’m happy. The car was fine, RN Vision did a great job. Everything perfect!”

Johan Vannerum, #32 Selleslagh Racing Team Mercedes AMG GT4: “It was a hectic start of the race, with a lot happening around us that held us up. We took a cautious approach, made the pitstop at the right moment and then Jean-Luc finished it.”

Jean-Luc Behets, #32 Selleslagh Racing Team Mercedes AMG GT4: “It was my first race in the series and the first time at Monza for both of us. Yesterday we had to get used to the track, but we did it! Now we’re looking forward to tomorrow’s races.”

V8 Racing returns to GT4 with pair of new Camaros