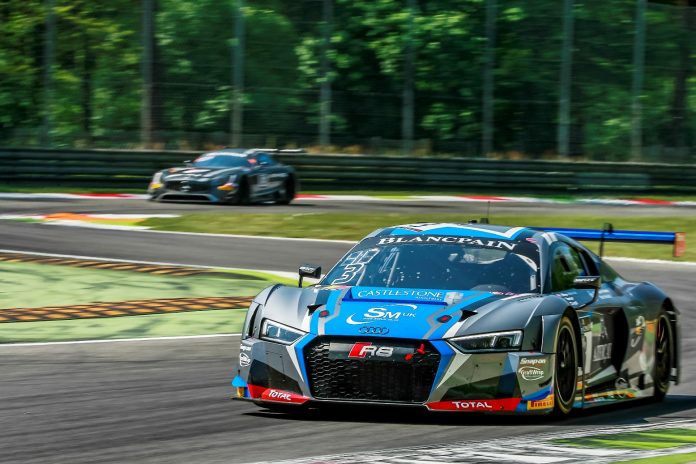 The Italian campaign wasn’t to be successful this year: just like a few weeks ago at Misano in the Sprint Cup, the Belgian Audi Club Team WRT had a frustrating weekend in Monza for the season-opener of the Endurance Cup. In Lombardy too, the team had to face drama from the beginning, as the car of Berthon-Richelmi-Tréluyer had to be withdrawn after it was hit from the back in the first lap of qualifying. Another car, the one of Fässler-Stevens-Vanthoor was put out of contention by the consequences of the massive crash at the start. The two other cars of the team could finish the race, climbing back positions to take P12 (Dennis-Leonard-Winkelhock) and P24 (Caygill-Mayr Melnhof-Venter). A frustrating weekend because the Audis R8 LMS proved to deserve much better and a difficult start of the season that the team is determined to correct as from the next rounds in England.

Team Principal Vincent Vosse was philosophical on Sunday eve: “It has been a chaotic weekend, and I don’t want to sound like Calimero, but we had again a good share of bad luck. We lose two cars on circumstances out of our control. The two others do a good race despite starting from the second half of the grid. It’s really not the start of the season we wanted, but it’s not the first set-back that we have to overcome. We have the strength and the determination to fight back and that is what we have to do as from the British races.”

From the start of the weekend, it was clear that competition, with 53 cars on rack, was going to be extremely close, as proven by the result of the combined qualifying, which saw no less than 32 cars within a second! In a power track such as Monza, the Audis R8 LMS did relatively well, with car #5 of Fässler-Stevens-Vanthoor being in the top 4 in free practice and pre-qualifying. Qualifying proved to be a more difficult exercise, as expected, and started with total drama for the Belgian Audi Club Team WRT: Berthon got hit from the back by the Lambo of Filippi, who missed his braking, in the very opening lap of the session. The consequences for car #2 were catastrophic, with damages to the chassis, which meant ‘weekend over’.

More drama was to strike as soon as the start was given on Sunday, with the Bentley of Smith and the Lambo of Pérez-Companc at the front of the field colliding in the straight, well before the first chicane. The spinning Lambo inevitably provoked disaster in the middle of the field, resulting in ten cars out of contention and the race being red-flagged. Unfortunately, among the innocent victims, was the #5 of Will Stevens. The team made a great effort trying to repair the car during the stop of the race, and the Brit effectively re-took the track once the race had restarted but only to stop after a few laps, as the car’s behaviour had been severely affected by the damage sustained. “It’s just bad luck, there is nothing to say”, commented Dries Vanthoor, “It’s a pity, because we were quick, despite we couldn’t do that well in qualifying because of traffic.”

For the two surviving Audis of the Belgian squad it was a catch-up race. In car #17, Markus Winkelhock did a good stint, running among the top 18, but lost some positions after a spin at the first chicane caused by a contact from the back. The car performed an early and perfect pit stop, with Stuart Leonard going back to the track in P17 and gaining ground during his stint. The young Jake Dennis finished the race strongly, climbing some more positions to finish 12th and very close to the points.

Car #3 performed an even bigger come-back, benefitting at the beginning from the numerous retirements. Niki Mayr-Melnhof managed to get in in the top 25 during his stint, with the car gaining four positions more during the pit stop. Jon Venter and Josh Caygill, in their first outing in the Endurance Cup, had to battle hard in the most crowded part of the field, and did it well, the car crossing the line in P24.

The Blancpain GT Series will continue now with the UK campaign, with the Sprint Cup race at Brands Hatch on 6-7 May and the Endurance Cup round at Silverstone one week later.