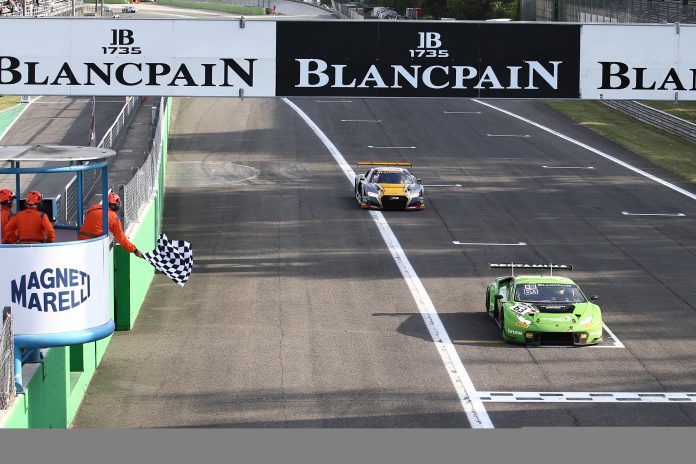 The first endurance race of the 2017 Blancpain GT Series saw the #63 Grasser Racing Team Lamborghini of Mirko Bortolotti, Andrea Caldarelli and Christian Engelhart cross the line in first. In the end the trio had an impressive 29-second lead over the #50 Spirit of Race Ferrari. When the #75 ISR Audi retired with six minutes to go, the #84 Mercedes-AMG Team HTP Motorsport car moved up to third.

In Pro-Am the #97 Oman Racing Team with TF Sport Aston Martin took the win after a majestic final stint of Jonny Adam, while the honours in Am Cup went to the #961 AF Corse Ferrari. The race was red-flagged for some 20 minutes after a crash at the start. All drivers involved were ok, but more than a dozen cars were unable to take the restart.

The TM Performance 3 Hours of Monza were yet again one of the must-attend events of the international motorsports calendar. 20.500 spectators travelled to the mythical Autodromo Nazionale di Monza, not only to enjoy the beautiful Italian weather, but also to admire a plethora of impressive supercars, witness some interesting support races and meet the teams and drivers of the Blancpain GT Series.

But it was the TM Performance 3 Hours of Monza, the first endurance race of the 2017 Blancpain GT Series that claimed most of the interest. With 52 cars on the entry list, the Blancpain GT Series emphasized its status as the biggest GT series on the motorsports planet. Unfortunately, not all cars made it through the first corner. A contact in the run-up to the Rettifilio chicane caused the #19 Grasser Racing Team Lamborghini to spin in front of the oncoming cars and mayhem was unavoidable. Some 16 cars were involved in the crash, but fortunately no driver was injured. The necessary race stoppage to clear the track only took 20 minutes, and after a safety car start the remaining cars could well and truly get underway.

Meanwhile, the race stewards had found the #7 Bentley Team M-Sport Continental responsible for the crash and the car was given a 15 second stop&go penalty. When the car did not serve that time penalty during the reglementary three laps, the car was black-flagged. This reduced the fight for the lead to two cars, the #72 SMP Racing Ferrari of Miguel Molina and the #63 Grasser Racing Team Lamborghini driven by Mirko Bortolotti. During the first pitstop the Austrian squad made the difference, leaving the pitlane with a five-second advantage. Blancpain GT Series rookie Andrea Caldarelli and Christian Engelhart increased the lead to a massive 29 seconds at the chequered flag. For the Grasser Racing Team, Bortolotti and Engelhart, this is the second consecutive endurance victory in the Blancpain GT Series after taking the win in the Nürburgring round at the end of the 2016 season.

Behind the green Huracan, the fight for the other podium positions was decided by a closely fought duel between the #72 SMP Racing Ferrari, the #75 ISR Audi and the #50 Spirit of Race Ferrari. But when Davide Rigon had to serve a drive-through in the Russian Ferrari (for overtaking under yellow) and Clemens Schmid suffered the cruel fate of having to park the ISR R8 some six minutes from the end – the left rear tyre let go – Alessandro Pier Guidi (who had set the car on pole), Michele Rugolo and Pasin Lathouras took the second step on the Monza rostrum.

Behind them, championship leaders Maxi Buhk and Franck Perera, sharing the #84 Mercedes-AMG Team HTP Motorsport car with Jimmy Eriksson, scored important points by moving up to third. Buhk, who had started from 16th, showed his reflexes at the start and barely avoided the crashing cars. Behind the Mercedes-AMG, the Ferraris of Kaspersky Motorsport and SMP Racing completed the top five.

Another driver that had a lucky escape in those first lap incidents was Ahmad Al-Harthy in the #97 Oman Racing Team with TF Sport Aston Martin. In the Italian heat, the Omani driver went on to complete an impressive double-stint, holding off the #911 Herberth Motorsport Porsche early on, in an effort to hang on to the Pro-Am Cup lead as long as possible. But when Jonny Adam took the wheel to complete the final stint, the Scotsman had some 12 seconds to make up to the new leader, Andrea Rizzoli in the #11 Kessel Racing Ferrari. Thanks to some magnificent driving – Adam even set the overall fastest lap of the race – the Aston Martin driver managed to close the gap and take the Pro-Am Cup lead with only a couple of laps to go. Adam, who on Sunday morning had placed the Aston on the Pro-Am Cup pole, also finished in eighth overall. Behind the Kessel Racing 488 the #53 Spirit of Race Ferrari of Niek Hommerson, Louis Machiels and Andrea Bertolini took third in the Pro-Am Cup. No fewer than eight Pro-Am cars finished in the top-20, clearly showing the high level of the category.

In the Am Cup the #488 Rinaldi Racing Ferrari of Pierre Ehret and Rino Mastronardi looked set to take an emphatic win, but when Mastronardi ended the middle stint with well over a minute in hand, the green Ferrari caught fire and that was that. The Am Cup lead went to the #961 AF Corse Ferrari, a car that barely made it to the start. The AF Corse mechanics had to change the gearbox less than an hour before, but managed to do so. Alex Demirdjian, Blancpain GT Series rookie Abbie Eaton and Davide Rizzo completed the job with a faultless drive. Eaton thus becomes the first woman driver to win her class in a Blancpain GT Series race.

The next round of the Blancpain GT Series will be held in Brands Hatch. The second sprint event of 2017 takes place on May 6th/7th.

Christian Engelhart (#63 Grasser Racing Team Lamborghini, 1st overall): “This is amazing. I’ve been watching this Series for a long time before I made my debut at the Nürburgring last year, and now to be in it, to be working with this team and these drivers is just a dream for me. Especially since I was able my second endurance race. For the championship this win is important, and now we want to be at the front at all of the races.”

Alessandro Pier Guidi (#50 Spirit of Race Ferrari, 2nd overall): “I know we were a bit lucky to take second – it would have been very difficult to overtake the Audi, for it was quicker on the straights – but that does not diminish the fact that this is a fantastic result for us. We had a perfect strategy, perfect pitstops and the car felt pretty good. We will try to beat the Lamborghini next time, for sure.”

Maxi Buhk (#84 Mercedes-AMG Team HTP Motorsport, 3rd overall): “I had to take to the grass to avoid the crash at the start, but I gave Blancpain some extra promotion by hitting one of the distance markers with their label on it. After that I had pretty busy first stint. There was plenty of overtaking all the time. We were a bit lucky to finish third, but we take it. These are important points for the championship.”

Jonny Adam (#97 Oman Racing Team with TF Sport Aston Martin, 1st Pro-Am Cup): “I was never really sure that I could take the lead to be honest. In the beginning of my stint I had to fight with some Pro cars, but we did a lot of work on this new car and it paid off. The Aston behaved perfectly. The team was keeping me informed of the gap and I knew I had the pace, but it wasn’t until the Ferrari made a slight mistake that I was able to overtake him. We have been waiting a long time for this win. I know how much work Ahmad does behind the scenes, to get the sponsors, to get Oman Racing here, so this one’s for him and the team.”

Alex Demirdjian (#961 AF Corse Ferrari, 1st Am Cup): “I have to thank the whole AF Corse team for changing the gearbox right before the start. Everybody helped, it was very stressful, but we made it just in time. After my stint Abbie and Davide did a perfect job and I am very happy to take the win here. It’s a reward for an exceptional effort of the whole team.”